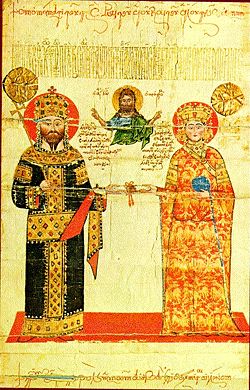 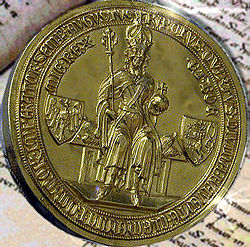 A Golden Bull or chrysobull was a golden ornament representing a seal (a bulla aurea or "golden seal" in Latin
Latin
Latin is an Italic language originally spoken in Latium and Ancient Rome. It, along with most European languages, is a descendant of the ancient Proto-Indo-European language. Although it is considered a dead language, a number of scholars and members of the Christian clergy speak it fluently, and...
), attached to a decree issued by Byzantine Emperors and later by monarchs in Europe during the Middle Ages
Middle Ages
The Middle Ages is a periodization of European history from the 5th century to the 15th century. The Middle Ages follows the fall of the Western Roman Empire in 476 and precedes the Early Modern Era. It is the middle period of a three-period division of Western history: Classic, Medieval and Modern...
and Renaissance
Renaissance
The Renaissance was a cultural movement that spanned roughly the 14th to the 17th century, beginning in Italy in the Late Middle Ages and later spreading to the rest of Europe. The term is also used more loosely to refer to the historical era, but since the changes of the Renaissance were not...
. The term was originally coined for the golden seal itself but came to be applied to the entire decree. Such decrees were known as golden bulls in western Europe and chrysobullos logos, or chrysobulls, in the Byzantine Empire (χρυσός, chrysos, being Greek
Greek language
Greek is an independent branch of the Indo-European family of languages. Native to the southern Balkans, it has the longest documented history of any Indo-European language, spanning 34 centuries of written records. Its writing system has been the Greek alphabet for the majority of its history;...
for gold
Gold
Gold is a chemical element with the symbol Au and an atomic number of 79. Gold is a dense, soft, shiny, malleable and ductile metal. Pure gold has a bright yellow color and luster traditionally considered attractive, which it maintains without oxidizing in air or water. Chemically, gold is a...
).

For nearly eight hundred years, they were issued unilaterally, without obligations on the part of the other party or parties. However, this eventually proved disadvantageous as the Byzantines sought to restrain the efforts of foreign powers to undermine the empire. During the 12th century, the Byzantines began to insert into golden bulls sworn statements of the obligations of their negotiating partners.