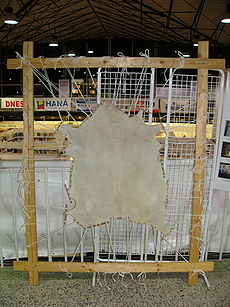 Goatskin is the skin
Skin
-Dermis:The dermis is the layer of skin beneath the epidermis that consists of connective tissue and cushions the body from stress and strain. The dermis is tightly connected to the epidermis by a basement membrane. It also harbors many Mechanoreceptors that provide the sense of touch and heat...
of a goat
Goat
The domestic goat is a subspecies of goat domesticated from the wild goat of southwest Asia and Eastern Europe. The goat is a member of the Bovidae family and is closely related to the sheep as both are in the goat-antelope subfamily Caprinae. There are over three hundred distinct breeds of...
.

Non tanned goatskin is used for parchment
Parchment
Parchment is a thin material made from calfskin, sheepskin or goatskin, often split. Its most common use was as a material for writing on, for documents, notes, or the pages of a book, codex or manuscript. It is distinct from leather in that parchment is limed but not tanned; therefore, it is very...
or for drumhead
Drumhead
A drumhead is a membrane stretched over one or both of the open ends of a drum. The drumhead is struck with sticks, mallets, or hands so that it vibrates and the sound resonates through the drum.-History:...
s or sounding board
Sounding board
A sound board, or soundboard, is the surface of a string instrument that the strings vibrate against, usually via some sort of bridge. The resonant properties of the sound board and the interior of the instrument greatly increase loudness over the string alone.The sound board operates by the...
s of some musical instruments, e.g., mišnice
Mišnice
The mišnice is an instrument like a bagpipe, made from goatskin. Its date of invention is unknown but it is known to have existed in Europe by the 9th century...
in medieval Europe, bodhrán
Bodhrán
The bodhrán is an Irish frame drum ranging from 25 to 65 cm in diameter, with most drums measuring 35 to 45 cm . The sides of the drum are 9 to 20 cm deep. A goatskin head is tacked to one side...
in Ireland, esraj
Esraj
The esraj is a string instrument found in two forms throughout the north, central, and east regions of India. It is a young instrument by Indian terms, being only about 200 years old. The dilruba is found in the north, where it is used in religious music and light classical songs in the urban areas...
in India and for instrumental drum skin named bedug
Bedug
The bedug is one of the drums used in the gamelan. It is also used among Muslims in Java in religious purposes.-Overview:Unlike the more frequently-used kendang, the bedug is suspended from a rack and played with a padded mallet. It is similar in size or larger to the largest kendang...
in Indonesia.

Tanned
Tanning
Tanning is the making of leather from the skins of animals which does not easily decompose. Traditionally, tanning used tannin, an acidic chemical compound from which the tanning process draws its name . Coloring may occur during tanning...
leather
Leather
Leather is a durable and flexible material created via the tanning of putrescible animal rawhide and skin, primarily cattlehide. It can be produced through different manufacturing processes, ranging from cottage industry to heavy industry.-Forms:...
from goatskin is considered extremely durable and is commonly used to make rug
Carpet
A carpet is a textile floor covering consisting of an upper layer of "pile" attached to a backing. The pile is generally either made from wool or a manmade fibre such as polypropylene,nylon or polyester and usually consists of twisted tufts which are often heat-treated to maintain their...
s (for example in Indonesia) and carpet binding. It is often used for glove
Glove
A glove is a garment covering the hand. Gloves have separate sheaths or openings for each finger and the thumb; if there is an opening but no covering sheath for each finger they are called "fingerless gloves". Fingerless gloves with one large opening rather than individual openings for each...
s, boot
Boot
A boot is a type of footwear but they are not shoes. Most boots mainly cover the foot and the ankle and extend up the leg, sometimes as far as the knee or even the hip. Most boots have a heel that is clearly distinguishable from the rest of the sole, even if the two are made of one piece....
s, and other products that require a soft hide. Kid gloves, popular in Victorian times, are still made today. It is used for a traditional Spanish container for wine bota bag
Bota bag
A bota bag or wineskin is a traditional Spanish liquid receptacle. Typically, it is made of leather , and is used to carry wine, although any liquid will do.- Construction :...
(or called goatskin). Traditional kefir
Kefir
Kefir is a fermented milk drink that originated with shepherds of the North Caucasus region, who discovered that fresh milk carried in leather pouches would occasionally ferment into an effervescent beverage...
was made in bags from goatskin.

In Roman mythology
Roman mythology
Roman mythology is the body of traditional stories pertaining to ancient Rome's legendary origins and religious system, as represented in the literature and visual arts of the Romans...
priests of god Lupercus
Lupercus
Lupercus of Berytus was a Greek grammarian. He wrote On the Word, The Foundation of Arsinoe in Egypt, and more.- References :http://www.stoa.org/sol-bin/search.pl?search_method=QUERY&login=guest&enlogin=guest&page_num=1&user_list=LIST&searchstr=Arsinoe&field=any#_per_page=25&db=REAL...
wore goatskins.

A breed of goat that provides high-quality skin is for example the Black Bengal
Black Bengal
Black Bengal goat or Bengal Black goat is the common name for a small breed of goat found in Bangladesh and northeastern India . In Bangladesh, they are known simply as "BBGs."...
breed, native to Bangladesh
Bangladesh
Bangladesh , officially the People's Republic of Bangladesh is a sovereign state located in South Asia. It is bordered by India on all sides except for a small border with Burma to the far southeast and by the Bay of Bengal to the south...
.

In 1974, there was a great controversy in America surrounding goatskin products originating in Haiti
Haiti
Haiti , officially the Republic of Haiti , is a Caribbean country. It occupies the western, smaller portion of the island of Hispaniola, in the Greater Antillean archipelago, which it shares with the Dominican Republic. Ayiti was the indigenous Taíno or Amerindian name for the island...
http://www.cpsc.gov/cpscpub/prerel/prhtml74/74026.html. The Center for Disease Control discovered that some of these products contained deadly anthrax
Anthrax
Anthrax is an acute disease caused by the bacterium Bacillus anthracis. Most forms of the disease are lethal, and it affects both humans and other animals...
spores. All Haitian goatskin products in America were recalled, and no fatalities were recorded.
The source of this article is wikipedia, the free encyclopedia.  The text of this article is licensed under the GFDL.