Encyclopedia
The esraj is a string instrument
String instrument
A string instrument is a musical instrument that produces sound by means of vibrating strings. In the Hornbostel-Sachs scheme of musical instrument classification, used in organology, they are called chordophones...
found in two forms throughout the north, central, and east regions of India
India
India , officially the Republic of India , is a country in South Asia. It is the seventh-largest country by geographical area, the second-most populous country with over 1.2 billion people, and the most populous democracy in the world...
. It is a young instrument by Indian terms, being only about 200 years old. The dilruba is found in the north, where it is used in religious music and light classical songs in the urban areas. Its name is translated as "robber of the heart." The esraj is found in the east and central areas, particularly Bengal
Bengal
Bengal is a historical and geographical region in the northeast region of the Indian Subcontinent at the apex of the Bay of Bengal. Today, it is mainly divided between the sovereign land of People's Republic of Bangladesh and the Indian state of West Bengal, although some regions of the previous...
(Bangladesh
Bangladesh
Bangladesh , officially the People's Republic of Bangladesh is a sovereign state located in South Asia. It is bordered by India on all sides except for a small border with Burma to the far southeast and by the Bay of Bengal to the south...
and Indian states of West Bengal
West Bengal
West Bengal is a state in the eastern region of India and is the nation's fourth-most populous. It is also the seventh-most populous sub-national entity in the world, with over 91 million inhabitants. A major agricultural producer, West Bengal is the sixth-largest contributor to India's GDP...
and Tripura
Tripura
Tripura is a state in North-East India, with an area of . It is the third smallest state of India, according to area. Tripura is surrounded by Bangladesh on the north, south, and west. The Indian states of Assam and Mizoram lie to the east. The capital is Agartala and the main languages spoken are...
) and it is used in a somewhat wider variety of musical styles than is the dilruba. 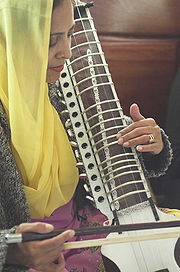 The Dilruba originates from the Taus
Taus (instrument)
The taus is a bowed string instrument from the north and central India, as well as from the Punjab. Taus was the work of Sri Guru Hargobind Ji . From this instrument originates the lighter dilruba. It has a peacock body sound box and a neck with 20 heavy metal frets...
and some argue is the work of the 10th Sikh
Sikh
A Sikh is a follower of Sikhism. It primarily originated in the 15th century in the Punjab region of South Asia. The term "Sikh" has its origin in Sanskrit term शिष्य , meaning "disciple, student" or शिक्ष , meaning "instruction"...
Guru
Guru
A guru is one who is regarded as having great knowledge, wisdom, and authority in a certain area, and who uses it to guide others . Other forms of manifestation of this principle can include parents, school teachers, non-human objects and even one's own intellectual discipline, if the...
, Guru Gobind Singh
Guru Gobind Singh
Guru Gobind Singh is the tenth and last Sikh guru in a sacred lineage of ten Sikh gurus. Born in Patna, Bihar in India, he was also a warrior, poet and philosopher. He succeeded his father Guru Tegh Bahadur as the leader of Sikhs at a young age of nine...
, whilst that of the Taus was the work of Guru Hargobind (the sixth guru of the Sikhs). The Dilruba was then produced to replace the previously heavy instrument (the Taus). This attempt was intended to 'scale down' the Taus into what is now known to be the Dilruba. This made it more convenient for the Sikh army to carry the instrument on horseback.

The structure of both instruments is very similar, each having a medium sized sitar
Sitar
The 'Tablaman' is a plucked stringed instrument predominantly used in Hindustani classical music, where it has been ubiquitous since the Middle Ages...
-like neck with 20 heavy metal fret
Fret
A fret is a raised portion on the neck of a stringed instrument, that extends generally across the full width of the neck. On most modern western instruments, frets are metal strips inserted into the fingerboard...
s. This neck holds on a long wooden rack of 12-15 sympathetic string
Sympathetic string
Sympathetic strings or resonance strings are auxiliary strings found on many Indian musical instruments, as well as some Western Baroque instruments and a variety of folk instruments...
s. While the dilruba has more sympathetic strings and a differently shaped body than the esraj, they both have four main strings which are bow
Bow (music)
In music, a bow is moved across some part of a musical instrument, causing vibration which the instrument emits as sound. The vast majority of bows are used with string instruments, although some bows are used with musical saws and other bowed idiophones....
ed. All strings are metal. The soundboard is a stretched piece of goatskin
Goatskin (material)
Goatskin is the skin of a goat.Non tanned goatskin is used for parchment or for drumheads or sounding boards of some musical instruments, e.g., mišnice in medieval Europe, bodhrán in Ireland, esraj in India and for instrumental drum skin named bedug in Indonesia.Tanned leather from goatskin is...
similar to what is found on a sarangi
Sarangi
The Sārangī is a bowed, short-necked string instrument of India which is originated from Rajasthani folk instruments. It plays an important role in India's Hindustani classical music tradition...
. Sometimes the instrument has a gourd
Gourd
A gourd is a plant of the family Cucurbitaceae. Gourd is occasionally used to describe crops like cucumbers, squash, luffas, and melons. The term 'gourd' however, can more specifically, refer to the plants of the two Cucurbitaceae genera Lagenaria and Cucurbita or also to their hollow dried out shell...
affixed to the top for balance or for tone enhancement.

The instrument can be rested between the knees while the player kneels, or more commonly rested on the knee of the player while sitting, or also on the floor just in front of the player, with the neck leaning on the left shoulder. It is played with a bow (known as a "gaz"), with the other hand moving along the strings above the frets. The player may slide the note up or down to achieve the portamento
Portamento
Portamento is a musical term originated from the Italian expression "portamento della voce" , denoting from the beginning of the 17th century a vocal slide between two pitches and its emulation by members of the violin family and certain wind instruments, and is sometimes used...
, or meend
Meend
In Hindustani music, meend refers to a glide from one note to another. It is an essential performance practice, and is used often in vocal and instrumental music. On the veena, sitar, and other plucked stringed instruments, it is usually done by pushing the strings across the frets to vary their...
, characteristic of Indian music.

The esraj is mostly used as an accompanying instrument. It is the accompanying instrument of choice for Rabindra Sangeet
Rabindra Sangeet
Rabindra Sangeet , also known as Tagore Songs in English, is a form of music composed by Rabindranath Tagore who added a new dimension to the musical concept of India in general and Bengal in specific....
singing. However, it has also been used as a solo instrument to interpret Hindustani Classical Music
Hindustani classical music
Hindustani classical music is the Hindustani or North Indian style of Indian classical music found throughout the northern Indian subcontinent. The style is sometimes called North Indian Classical Music or Shāstriya Sangeet...
, mostly in the Vishnupur tradition. Additionally, the esrag is a more modern invention from the Dilruba that was made and promoted by the Namdharis.

A. R. Rahman
A. R. Rahman
Allah Rakha Rahman is an Indian composer, singer-songwriter, record producer, musician, and philanthropist. Described as the world's most prominent and prolific film composer by Time, his works are notable for integrating eastern classical music with electronic music sounds, world music genres and...
is known as one of the composers in India who has used the Dilruba, in works like "Dil Se" and "Vande Mataram". Possibly the most famous exponent of the esraj has been Pandit Ranadhir Ray, who died in 1988. Ranadhir Ray was a student of Ashesh Bandopadhyay, and was on the faculty at the Music department of Visva-Bharati University
Visva-Bharati University
Visva Bharati University is a Central University for research and teaching in India, located in the twin towns of Santiniketan and Sriniketan in the Indian state of West Bengal. It was founded by Rabindranath Tagore who called it Visva Bharati, which means the communion of the world with India...
in Santiniketan
Santiniketan
Santiniketan is a small town near Bolpur in the Birbhum district of West Bengal, India, approximately 180 kilometres north of Kolkata . It was made famous by Nobel Laureate Rabindranath Tagore, whose vision became what is now a university town that attracts thousands of visitors each year...
. Today, the best known exponent is Buddhadeb Das, also from Santiniketan. One of his leading student is Dattatreya Ghosh,reading in Nava Nalanda High School of there.

Ravi Shankar
Ravi Shankar
Ravi Shankar , often referred to by the title Pandit, is an Indian musician and composer who plays the plucked string instrument sitar. He has been described as the best known contemporary Indian musician by Hans Neuhoff in Musik in Geschichte und Gegenwart.Shankar was born in Varanasi and spent...
(known then as Rabindra) played the Dilruba in the 1930s, as a member of the dance group of his older brother Uday Shankar
Uday Shankar
Uday Shankar , the pioneer of modern dance in India, and a world renowned Indian dancer and choreographer, was most known for adapting Western theatrical techniques to traditional Indian classical dance, imbued with elements of Indian classical, folk, and tribal dance, thus laying the roots of...
.