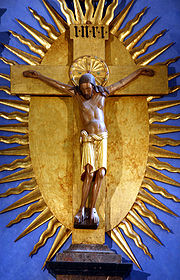 The Gero Cross or Gero Crucifix ("Gero-Kreuz" in German), of around 965–970, is the oldest large sculpture of the crucified
Crucifixion of Jesus
The crucifixion of Jesus and his ensuing death is an event that occurred during the 1st century AD. Jesus, who Christians believe is the Son of God as well as the Messiah, was arrested, tried, and sentenced by Pontius Pilate to be scourged, and finally executed on a cross...
Christ north of the Alps
Alps
The Alps is one of the great mountain range systems of Europe, stretching from Austria and Slovenia in the east through Italy, Switzerland, Liechtenstein and Germany to France in the west....
, and has always been displayed in Cologne Cathedral
Cologne Cathedral
Cologne Cathedral is a Roman Catholic church in Cologne, Germany. It is the seat of the Archbishop of Cologne and the administration of the Archdiocese of Cologne. It is renowned monument of German Catholicism and Gothic architecture and is a World Heritage Site...
in Germany
Germany
Germany , officially the Federal Republic of Germany , is a federal parliamentary republic in Europe. The country consists of 16 states while the capital and largest city is Berlin. Germany covers an area of 357,021 km2 and has a largely temperate seasonal climate...
. It was commissioned by Gero, Archbishop of Cologne
Gero, Archbishop of Cologne
Gero was the Archbishop of Cologne from 969 until his death.Gero originated from Thuringia. He and Thietmar, Margrave of Meissen, were the sons of Hidda, sister of Gero the Great, and Christian of Thuringia. On 29 August 970, he and his brother donated part of their inheritance for the foundation...
, who died in 976, thus providing a terminus ante quem for the work. It is carved in oak
Oak
An oak is a tree or shrub in the genus Quercus , of which about 600 species exist. "Oak" may also appear in the names of species in related genera, notably Lithocarpus...
, and painted and partially gilded – both have been renewed. The halo
Halo (religious iconography)
A halo is a ring of light that surrounds a person in art. They have been used in the iconography of many religions to indicate holy or sacred figures, and have at various periods also been used in images of rulers or heroes...
and cross-pieces are original, but the Baroque
Baroque
The Baroque is a period and the style that used exaggerated motion and clear, easily interpreted detail to produce drama, tension, exuberance, and grandeur in sculpture, painting, literature, dance, and music...
surround was added in 1683. The figure is 187 cm high, and the span of the arms is 165 cm.

The figure appears to be the earliest, and finest, of a number of life-size German wood sculpted crucifixions that appeared in the late Ottonian
Ottonian art
In pre-romanesque Germany, the prevailing style was what has come to be known as Ottonian art. With Ottonian architecture, it is a key component of the Ottonian Renaissance named for the emperors Otto I, Otto II, and Otto III...
or early Romanesque
Romanesque art
Romanesque art refers to the art of Western Europe from approximately 1000 AD to the rise of the Gothic style in the 13th century, or later, depending on region. The preceding period is increasingly known as the Pre-Romanesque...
period, later spreading to much of Europe. Additionally it appears to be the oldest Western depiction of a dead Christ
Christ
Christ is the English term for the Greek meaning "the anointed one". It is a translation of the Hebrew , usually transliterated into English as Messiah or Mashiach...
on the cross; in most earlier depictions Christ holds his head erect and looks straight ahead, or in some Carolingian examples looks down at the Virgin at the foot of the cross. The slumped head, and the twisted body, which arises as the hands are nailed to the cross at different heights, are found neither in Carolingian
Carolingian art
Carolingian art comes from the Frankish Empire in the period of roughly 120 years from about AD 780 to 900 — during the reign of Charlemagne and his immediate heirs — popularly known as the Carolingian Renaissance. The art was produced by and for the court circle and a group of...
nor Byzantine art
Byzantine art
Byzantine art is the term commonly used to describe the artistic products of the Byzantine Empire from about the 5th century until the Fall of Constantinople in 1453....
, and were to be slow to influence Western depictions, although the long hair spread over the shoulders is found in some Carolingian works. In crucifixions of the Gothic period a still more slumped and curved figure of Christ, with knees bent sideways, was to become the standard depiction.

Earlier large figures of Christ on the Cross appear to have been in metal, or metal on a wooden core; there was said to be one in Charlemagne
Charlemagne
Charlemagne was King of the Franks from 768 and Emperor of the Romans from 800 to his death in 814. He expanded the Frankish kingdom into an empire that incorporated much of Western and Central Europe. During his reign, he conquered Italy and was crowned by Pope Leo III on 25 December 800...
's Palatine Chapel in Aachen
Palatine Chapel in Aachen
The Palatine Chapel is an Early Medieval chapel that is the remaining component of Charlemagne's Palace of Aachen. Although the palace no longer exists, the chapel has been incorporated into the Aachen Cathedral, Germany. It is the city's major landmark and the central monument of the Carolingian...
, and the Golden Madonna of Essen
Golden Madonna of Essen
The Golden Madonna of Essen is a sculpture with a wooden core covered all over with sheets of thin gold leaf of the Virgin Mary and the infant Jesus...
is an example of this type. The development of a tradition of free-standing monumental sculpture was a crucial development in Western art; in Byzantine art such images had been forbidden by the Second Council of Nicaea
Second Council of Nicaea
The Second Council of Nicaea is regarded as the Seventh Ecumenical Council by Roman Catholics, Eastern Orthodox, Eastern Catholic Churches and various other Western Christian groups...
in 787, and probably had been extremely rare before that.
The cross hangs in its own chapel near the sacristy
Sacristy
A sacristy is a room for keeping vestments and other church furnishings, sacred vessels, and parish records.The sacristy is usually located inside the church, but in some cases it is an annex or separate building...
in Cologne Cathedral – now a different, Gothic
Gothic architecture
Gothic architecture is a style of architecture that flourished during the high and late medieval period. It evolved from Romanesque architecture and was succeeded by Renaissance architecture....
, building from the one it was made for. The Chronicon of Thietmar of Merseburg
Thietmar of Merseburg
Thietmar of Merseburg was a German chronicler who was also bishop of Merseburg.-Life:...
, written 1012-1018, said that it was originally displayed above Gero's grave; though no one is now sure where that was located in the old church, most scholars place it somewhere on the central axis of the nave, in which case it may have been at the chancel arch, the usual location of later rood
Rood
A rood is a cross or crucifix, especially a large one in a church; a large sculpture or sometimes painting of the crucifixion of Jesus.Rood is an archaic word for pole, from Old English rōd "pole", specifically "cross", from Proto-Germanic *rodo, cognate to Old Saxon rōda, Old High German ruoda...
s or large crucifixes. It has long been celebrated and visited by pilgrims. Until the 1920s, despite local tradition, and the reference in Thietmar's chronicle, associating it with Gero, it was thought to be at least a century later in date, and it is indeed innovative for its date. The dating was confirmed by dendrochronology
Dendrochronology
Dendrochronology or tree-ring dating is the scientific method of dating based on the analysis of patterns of tree-rings. Dendrochronology can date the time at which tree rings were formed, in many types of wood, to the exact calendar year...
in 1976, ending the controversy. Contrary to long-held tradition, the studies in 1976 revealed that there is no space in the back of the head to place relics.

According to the Lucca
Lucca
Lucca is a city and comune in Tuscany, central Italy, situated on the river Serchio in a fertile plainnear the Tyrrhenian Sea. It is the capital city of the Province of Lucca...
n local histories, the Holy Face of Lucca
Holy Face of Lucca
The Holy Face of Lucca is a venerated wooden corpus of a crucifix, located in the free-standing octagonal Carrara marble chapel , which was built in 1484 by Matteo Civitali, the sculptor-architect of Lucca, to contain it. The tempietto stands in the right-hand nave of the cathedral of San...
in Italy is considerably older, though that sculpture had to be recreated in the Gothic period after being nibbled away by pilgrims, which makes this claim difficult to verify by art historians.

A replica of the crucifix hangs in the St. Alphonsus Chapel located in the Alphonse J. Schwartze Memorial Catholic Center
Alphonse J. Schwartze Memorial Catholic Center
The Alphonse J. Schwartze Memorial Catholic Center serves as the chancery offices for the Roman Catholic Diocese of Jefferson City. It is located adjacent to the Cathedral of Saint Joseph in Jefferson City, Missouri. It also serves as a pastoral center and a headquarters for the diocese. The...
in Jefferson City, Missouri
Missouri
Missouri is a US state located in the Midwestern United States, bordered by Iowa, Illinois, Kentucky, Tennessee, Arkansas, Oklahoma, Kansas and Nebraska. With a 2010 population of 5,988,927, Missouri is the 18th most populous state in the nation and the fifth most populous in the Midwest. It...
.