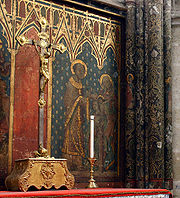 Gero was the Archbishop of Cologne
Archbishopric of Cologne
The Electorate of Cologne was an ecclesiastical principality of the Holy Roman Empire and existed from the 10th to the early 19th century. It consisted of the temporal possessions of the Roman Catholic Archdiocese of Cologne . It was ruled by the Archbishop in his function as prince-elector of...
from 969 until his death.

Gero originated from Thuringia
Thuringia
The Free State of Thuringia is a state of Germany, located in the central part of the country.It has an area of and 2.29 million inhabitants, making it the sixth smallest by area and the fifth smallest by population of Germany's sixteen states....
. He and Thietmar, Margrave of Meissen
Thietmar, Margrave of Meissen
Thietmar was the Margrave of Meissen from 970 until his death. Thietmar was the eldest of three brothers, all sons of Hidda, sister of Gero the Great, and Count Christian of Thuringia...
, were the sons of Hidda, sister of Gero the Great, and Christian of Thuringia. On 29 August 970, he and his brother donated part of their inheritance for the foundation of a monastery at Thankmarsfelden. By 975 (probably in 971), this became a royal monastery and was moved (in 975) to Nienburg
Nienburg
There are two towns named Nienburg in Germany.*Nienburg, Lower Saxony*Nienburg, Saxony-AnhaltThe Name Nienburg means "Neue Burg" ....
, a site in the founders' familial lands, where it would serve as a missionary base for work amongst the Slavs.

Gero died in 976 and was buried in the Cathedral of Cologne
Cologne Cathedral
Cologne Cathedral is a Roman Catholic church in Cologne, Germany. It is the seat of the Archbishop of Cologne and the administration of the Archdiocese of Cologne. It is renowned monument of German Catholicism and Gothic architecture and is a World Heritage Site...
, where he left as his legacy the great Romanesque
Romanesque art
Romanesque art refers to the art of Western Europe from approximately 1000 AD to the rise of the Gothic style in the 13th century, or later, depending on region. The preceding period is increasingly known as the Pre-Romanesque...
Gero Crucifix
Gero Crucifix
The Gero Cross or Gero Crucifix , of around 965–970, is the oldest large sculpture of the crucified Christ north of the Alps, and has always been displayed in Cologne Cathedral in Germany. It was commissioned by Gero, Archbishop of Cologne, who died in 976, thus providing a terminus ante quem for...
.
The source of this article is wikipedia, the free encyclopedia.  The text of this article is licensed under the GFDL.