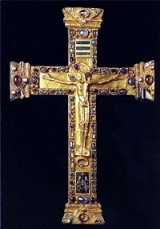 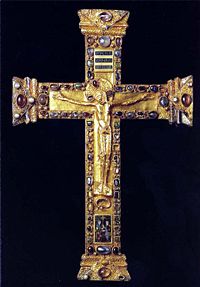 In pre-romanesque
Pre-Romanesque art
Pre-Romanesque art and architecture is the period in Western European art from either the emergence of the Merovingian kingdom in about 500 or from the Carolingian Renaissance in the late 8th century, to the beginning of the 11th century Romanesque period...
Germany
Germany
Germany , officially the Federal Republic of Germany , is a federal parliamentary republic in Europe. The country consists of 16 states while the capital and largest city is Berlin. Germany covers an area of 357,021 km2 and has a largely temperate seasonal climate...
, the prevailing style was what has come to be known as Ottonian art. With Ottonian architecture
Ottonian architecture
Ottonian Architecture is an architectural style which evolved during the reign of Emperor Otto the Great . The style was found in Germany and lasted from the mid 10th century until the mid 11th century....
, it is a key component of the Ottonian Renaissance
Ottonian Renaissance
The Ottonian Renaissance was a limited "renaissance" of economy and art in central and southern Europe that accompanied the reigns of the first three emperors of the Saxon Dynasty, all named Otto: Otto I , Otto II , and Otto III , and which in large part depended upon their patronage.One of three ...
(circa 951 – 1024) named for the emperors Otto I, Otto II, and Otto III. The style persisted past the Ottonian emperors, however, and into the reigns of the early Salians
Salian dynasty
The Salian dynasty was a dynasty in the High Middle Ages of four German Kings , also known as the Frankish dynasty after the family's origin and role as dukes of Franconia...
.

After the decline of the Carolingian Empire, the Holy Roman Empire
Holy Roman Empire
The Holy Roman Empire was a realm that existed from 962 to 1806 in Central Europe.It was ruled by the Holy Roman Emperor. Its character changed during the Middle Ages and the Early Modern period, when the power of the emperor gradually weakened in favour of the princes...
was re-established under the Saxon
Duchy of Saxony
The medieval Duchy of Saxony was a late Early Middle Ages "Carolingian stem duchy" covering the greater part of Northern Germany. It covered the area of the modern German states of Bremen, Hamburg, Lower Saxony, North Rhine-Westphalia, and Saxony-Anhalt and most of Schleswig-Holstein...
Ottonian dynasty. From this emerged a renewed faith in the idea of Empire and a reformed Church, creating a period of heightened cultural and artistic fervor. It was in this atmosphere that masterpieces were created that fused the traditions from which Ottonian artists derived their inspiration: models of Late Antique, Carolingian, and Byzantine origin.

Much Ottonian art reflected the dynasty's desire to establish visually a link to the Christian rulers of Late Antiquity, such as Constantine, Theoderic, and Justinian as well as to their Carolingian predecessors, particularly Charlemagne
Charlemagne
Charlemagne was King of the Franks from 768 and Emperor of the Romans from 800 to his death in 814. He expanded the Frankish kingdom into an empire that incorporated much of Western and Central Europe. During his reign, he conquered Italy and was crowned by Pope Leo III on 25 December 800...
. This goal was accomplished in various ways. For example, Ottonian ruler portraits typically include elements, such as province personifications, or representatives of the military and the Church flanking the emperor, with a lengthy imperial iconographical history. It is instructive to compare, for instance, the early Byzantine portrait of Justinian on the Barberini ivory
Barberini ivory
The Barberini ivory is a Byzantine ivory leaf from an imperial diptych dating from Late Antiquity, now in the Louvre in Paris. It is carved in the style known as late Theodosian, representing the emperor as triumphant victor...
with the portrait of Otto III in the Munich Gospels of Otto III (Bayerische Nationalbibl. clm. 4453). Also, the removal of spolia
Spolia
Spolia is a modern art-historical term used to describe the re-use of earlier building material or decorative sculpture on new monuments...
from Late Antique structures in Rome and Ravenna and their incorporation into Ottonian buildings was a popular device intended to remind the viewer of the patron's august imperial lineage. This was clearly the intention of Otto I when he removed columns, some of porphyry
Porphyry (geology)
Porphyry is a variety of igneous rock consisting of large-grained crystals, such as feldspar or quartz, dispersed in a fine-grained feldspathic matrix or groundmass. The larger crystals are called phenocrysts...
, and other building materials from the Palace of Theoderich in Ravenna and reused them in his new cathedral at Magdeburg
Magdeburg
Magdeburg , is the largest city and the capital city of the Bundesland of Saxony-Anhalt, Germany. Magdeburg is situated on the Elbe River and was one of the most important medieval cities of Europe....
. 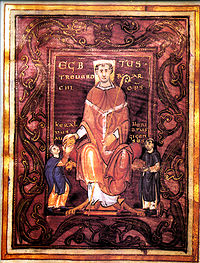 Ottonian monasteries produced some of the most magnificent medieval illuminated manuscripts. They were a major art form of the time, and monasteries received direct sponsorship from emperors and bishops, having the best in equipment and talent available. Among the greatest talents was the so-called Master of the Registrum Gregorii, or Gregory Master, who worked chiefly in Trier
Trier
Trier, historically called in English Treves is a city in Germany on the banks of the Moselle. It is the oldest city in Germany, founded in or before 16 BC....
in the 970s and 980s. He was responsible for several miniatures in the influential Codex Egberti, a gospel lectionary made for Archbishop Egbert of Trier, probably in the 980s. However, the majority of the 51 images in this book, which represent the first extensive cycle of images depicting the events of Christ's life in a western European manuscript, were made by two monks from the island monastery of Reichenau
Reichenau Island
Reichenau Island lies in Lake Constance in southern Germany, at approximately . It lies between Gnadensee and Untersee, two parts of Lake Constance, almost due west of the city of Konstanz. The island is connected to the mainland by a causeway that was completed in 1838...
in Lake Constance
Lake Constance
Lake Constance is a lake on the Rhine at the northern foot of the Alps, and consists of three bodies of water: the Obersee , the Untersee , and a connecting stretch of the Rhine, called the Seerhein.The lake is situated in Germany, Switzerland and Austria near the Alps...
. Subsequently, the Reichenau scriptorium specialized in Gospel illustration in liturgical book
Liturgical book
A liturgical book is a book published by the authority of a church, that contains the text and directions for the liturgy of its official religious services.-Roman Catholic:...
s, many of them, such as the Munich Gospels of Otto III (c. 1000) and the Pericope Book of Henry II
Pericopes of Henry II
The Pericopes of Henry II is a luxurious medieval illuminated manuscript made for Henry II, the last Ottonian Holy Roman Emperor, made c. 1002 – 1012 AD...
(Munich, Bayerische Nationalbibl. clm. 4452, c. 1001–1024), imperial commissions. Other important monastic scriptoria that flourished during the Ottonian age include those at Corvey, Hildesheim
Hildesheim
Hildesheim is a city in Lower Saxony, Germany. It is located in the district of Hildesheim, about 30 km southeast of Hanover on the banks of the Innerste river, which is a small tributary of the Leine river...
, Regensburg
Regensburg
Regensburg is a city in Bavaria, Germany, located at the confluence of the Danube and Regen rivers, at the northernmost bend in the Danube. To the east lies the Bavarian Forest. Regensburg is the capital of the Bavarian administrative region Upper Palatinate...
, Echternach
Echternach
Echternach is a commune with city status in the canton of Echternach, which is part of the district of Grevenmacher, in eastern Luxembourg. Echternach lies near the border with Germany, and is the oldest town in Luxembourg....
, and Cologne
Cologne
Cologne is Germany's fourth-largest city , and is the largest city both in the Germany Federal State of North Rhine-Westphalia and within the Rhine-Ruhr Metropolitan Area, one of the major European metropolitan areas with more than ten million inhabitants.Cologne is located on both sides of the...
. In addition, much very fine small-scale sculpture in metals--usually embellished with gems, enamels, crystals, and cameos--and ivory were made during the Ottonian period.
The source of this article is wikipedia, the free encyclopedia.  The text of this article is licensed under the GFDL.