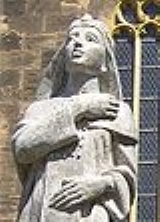 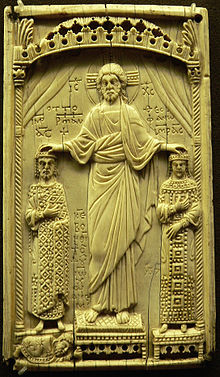 Theophanu , also spelled Theophania, Theophana or Theophano, was born in Constantinople
Constantinople
Constantinople was the capital of the Roman, Eastern Roman, Byzantine, Latin, and Ottoman Empires. Throughout most of the Middle Ages, Constantinople was Europe's largest and wealthiest city.-Names:...
, and was the wife of Otto II, Holy Roman Emperor
Otto II, Holy Roman Emperor
Otto II , called the Red, was the third ruler of the Saxon or Ottonian dynasty, the son of Otto the Great and Adelaide of Italy.-Early years and co-ruler with Otto I:...
.

Otto I, Holy Roman Emperor
Otto I, Holy Roman Emperor
Otto I the Great , son of Henry I the Fowler and Matilda of Ringelheim, was Duke of Saxony, King of Germany, King of Italy, and "the first of the Germans to be called the emperor of Italy" according to Arnulf of Milan...
had requested a Byzantine
Byzantine Empire
The Byzantine Empire was the Eastern Roman Empire during the periods of Late Antiquity and the Middle Ages, centred on the capital of Constantinople. Known simply as the Roman Empire or Romania to its inhabitants and neighbours, the Empire was the direct continuation of the Ancient Roman State...
princess for his son, Otto, to seal a treaty between the Holy Roman Empire
Holy Roman Empire
The Holy Roman Empire was a realm that existed from 962 to 1806 in Central Europe.It was ruled by the Holy Roman Emperor. Its character changed during the Middle Ages and the Early Modern period, when the power of the emperor gradually weakened in favour of the princes...
and the Eastern Roman Empire. The unwise reference by the pope to the Nikephoros II Phokas, the ruler in Constantinople, as "Greek" in a letter while Otto's ambassador, Liudprand of Cremona, was in the Byzantine court, had destroyed the first round of negotiations. With the ascension of a new emperor who had not been personally referred to other than as Roman Emperor, the treaty negotiations were able to resume. Theophanu duly arrived in grand style in 972, with a magnificent escort and bearing great treasure. However, according to the chronicler Thietmar, she was not the virgo desiderata, the anticipated imperial princess. Theophanu is identified in the marriage contract as the neptis (niece or granddaughter) of Emperor John I Tzimiskes
John I Tzimiskes
John I Tzimiskes or Tzimisces, was Byzantine Emperor from December 11, 969 to January 10, 976. A brilliant and intuitive general, John's short reign saw the expansion of the empire's borders and the strengthening of Byzantium itself.- Background :...
. Theophanu was nevertheless of distinguished noble heritage: recent research has established her as the daughter of Sophia Phokaina, Tzimiskes' cousin and niece of Nikephoros II
Nikephoros II
Nikephoros II Phokas was a Byzantine Emperor whose brilliant military exploits contributed to the resurgence of Byzantine Empire in the tenth century.-Early exploits:...
, and of Tzimiskes' brother-in-law (from his first marriage) Constantine Skleros.

Theophanu and Otto were married by Pope John XIII
Pope John XIII
Pope John XIII of Crescenzi family served as Pope from October 1, 965, until his death.Born in Rome, he spent his career in the papal court...
on April 14, 972 at Saint Peter's and she was crowned empress
Coronation of the Holy Roman Emperor
The Coronation of the Holy Roman Emperor refers to a ceremony in which the ruler of Europe's then largest political entity received the Imperial Regalia at the hands of the Pope, symbolizing the pope's alleged right to crown Christian sovereigns, and the emperor's role as protector of the Roman...
the same day in Rome. Their children were:

Theophanu accompanied her husband on all his journeys, and issued diplomas in her own name as Empress. It is known that she was frequently at odds with her mother-in-law, Adelaide of Italy
Adelaide of Italy
Saint Adelaide of Italy , also called Adelaide of Burgundy, was the second wife of Otto the Great, Holy Roman Emperor...
, and this caused an estrangement between Otto II and Adelaide. According to Odilo, Abbot of Cluny, Adelaide was very happy when "that Greek woman" died.

Albert of Metz describes Theophanu as being an unpleasant and talkative woman. Theophanu was also criticized for her decadence, which manifested in her bathing once a day and introducing luxurious garments and jewelry into Germany. She is credited with introducing the fork
Fork
As a piece of cutlery or kitchenware, a fork is a tool consisting of a handle with several narrow tines on one end. The fork, as an eating utensil, has been a feature primarily of the West, whereas in East Asia chopsticks have been more prevalent...
to Western Europe
Western Europe
Western Europe is a loose term for the collection of countries in the western most region of the European continents, though this definition is context-dependent and carries cultural and political connotations. One definition describes Western Europe as a geographic entity—the region lying in the...
- chronographers mention the astonishment she caused when she "used a golden double prong to bring food to her mouth" instead of using her hands as was the norm." The theologian Peter Damian
Peter Damian
Saint Peter Damian, O.S.B. was a reforming monk in the circle of Pope Gregory VII and a cardinal. In 1823, he was declared a Doctor of the Church...
even asserts that Theophanu had a love affair with John Philagathos, a Greek monk who briefly reigned as Antipope John XVI
Antipope John XVI
John XVI , born , , was an antipope from 997 to 998.-Life:He was born of Greek descent and was a native of Rossano in Calabria, southern Italy. At the time the region was a territory of the Byzantine Empire and John was the chaplain of Theophanu, the Empress consort of Emperor Otto II , who had...
.
Otto II died suddenly on December 7, 983, and was buried in Rome. That Christmas Theophanu had their three-year-old son crowned as Otto III, with herself ruling as Empress Regent on his behalf. Henry II, Duke of Bavaria
Henry II, Duke of Bavaria
Henry II , called the Wrangler or the Quarrelsome, in German Heinrich der Zänker, was the son of Henry I and Judith of Bavaria.- Biography :...
seized Otto in spring 984, but was forced to surrender the child to his mother. With the cooperation of Willigis, Archbishop of Mainz, and Hildebald, Bishop of Worms, Theophanu reigned until her death in 991.

She was buried in the Church of St. Pantaleon
Church of St. Pantaleon
The Church of St. Pantaleon is an early Romanesque church in Cologne, Germany. The church dates back to the 10th Century and is the oldest of the twelve Romanesque churches of Cologne. The former monastery church is consecrated to Saint Pantaleon and the Saints Cosmas and Damian. The empress...
at Cologne
Cologne
Cologne is Germany's fourth-largest city , and is the largest city both in the Germany Federal State of North Rhine-Westphalia and within the Rhine-Ruhr Metropolitan Area, one of the major European metropolitan areas with more than ten million inhabitants.Cologne is located on both sides of the...
. The chronicler Thietmar eulogized her as follows: "Though [Theophanu] was of the weak sex she possessed moderation, trustworthiness, and good manners. In this way she protected with male vigilance the royal power for her son, friendly with all those who were honest, but with terrifying superiority against rebels."