Encyclopedia
The Goldmark was the currency used in the German Empire
German Empire
The German Empire refers to Germany during the "Second Reich" period from the unification of Germany and proclamation of Wilhelm I as German Emperor on 18 January 1871, to 1918, when it became a federal republic after defeat in World War I and the abdication of the Emperor, Wilhelm II.The German...
from 1873 to 1914.

Before unification
Unification of Germany
The formal unification of Germany into a politically and administratively integrated nation state officially occurred on 18 January 1871 at the Versailles Palace's Hall of Mirrors in France. Princes of the German states gathered there to proclaim Wilhelm of Prussia as Emperor Wilhelm of the German...
, the different German states issued a variety of different currencies, though most were linked to the Vereinsthaler
Vereinsthaler
The Vereinsthaler was a standard silver coin used in most German states and the Austrian Empire in the years prior to German unification.- Introduction :...
, a silver coin
Silver coin
Silver coins are possibly the oldest mass produced form of coinage. Silver has been used as a coinage metal since the times of the Greeks. Their silver drachmas were popular trade coins....
containing 16⅔ grams of pure silver. Although the Mark was based on gold rather than silver, a fixed exchange rate between the Vereinsthaler and the Mark of 3 Mark = 1 Vereinsthaler was used for the conversion. Southern Germany had used the Gulden
South German gulden
The Gulden was the currency of the states of southern Germany between 1754 and 1873. These states included Bavaria, Baden, Württemberg, Frankfurt and Hohenzollern....
as the standard unit of account, which was worth of a Vereinsthaler and, hence, became worth 1.71 (1 ) Mark in the new currency. Bremen
Bremen (state)
The Free Hanseatic City of Bremen is the smallest of Germany's 16 states. A more informal name, but used in some official contexts, is Land Bremen .-Geography:...
had used a gold based Thaler
Bremen thaler
The Thaler was the currency of Bremen until 1873. It was divided into 72 Grote, each of 5 Schwaren. Until 1863, the Bremen Thaler was on a silver standard, containing 1/13½ Cologne mark of silver. After 1863, the Bremen Thaler, unlike the Vereinsthaler, went over to a gold standard and was worth 1...
which was converted directly to the Mark at a rate of 1 gold Thaler = 3.32 (3) Mark. Hamburg had used its own Mark
Hamburg mark
The Mark was the currency of Hamburg until 1873. It was subdivided into 16 Schilling, each of 12 Pfennig. The Hamburg Mark was on a silver standard, with the final peg being 1 Mark = 1/34 Cologne mark. It was replaced by the Goldmark at a rate of 1 Hamburg mark = 1.2 Goldmark .-External links:*...
prior to 1873. This was replaced by the Goldmark at a rate of 1 Hamburg Mark = 1.2 Goldmark.

From January 1, 1876 onwards, the Mark became the only legal tender
Legal tender
Legal tender is a medium of payment allowed by law or recognized by a legal system to be valid for meeting a financial obligation. Paper currency is a common form of legal tender in many countries....
. The name Goldmark was created later to distinguish it from the Papiermark
German papiermark
The name Papiermark is applied to the German currency from the 4th August 1914 when the link between the Mark and gold was abandoned, due to the outbreak of World War I...
(paper mark) which suffered a serious loss of value through hyperinflation following World War I (see inflation in the Weimar Republic
Inflation in the Weimar Republic
The hyperinflation in the Weimar Republic was a three year period of hyperinflation in Germany between June 1921 and July 1924.- Analysis :...
). The Goldmark was on a gold standard with 2790 Mark equal to 1 kilogram of pure gold (1 Mark = 358 mg). From 1900 to 1933, the United States adhered to a gold standard
Gold standard
The gold standard is a monetary system in which the standard economic unit of account is a fixed mass of gold. There are distinct kinds of gold standard...
as well, with the value of the dollar being fixed at a price of one-twentieth ounce
Ounce
The ounce is a unit of mass with several definitions, the most commonly used of which are equal to approximately 28 grams. The ounce is used in a number of different systems, including various systems of mass that form part of the imperial and United States customary systems...
(troy weight
Troy weight
Troy weight is a system of units of mass customarily used for precious metals, gemstones, and black powder.There are 12 troy ounces per troy pound, rather than the 16 ounces per pound found in the more common avoirdupois system. The troy ounce is 480 grains, compared with the avoirdupois ounce,...
) of gold. The gold mark therefore had a value of approximately U.S. $0.25. 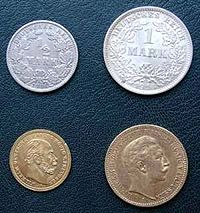 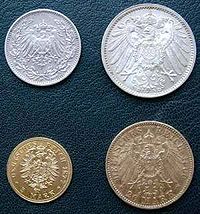 Coins of denominations between 1 Pfennig and 1 Mark were issued in standard designs for the whole Empire, whilst those above 1 Mark were issued by the individual states, using a standard design for the reverses (the Reichsadler, the eagle insignia of the German Empire) with a design specific to the state on the obverse, generally a portrait of the monarch, with the free cities of Bremen
Bremen (state)
The Free Hanseatic City of Bremen is the smallest of Germany's 16 states. A more informal name, but used in some official contexts, is Land Bremen .-Geography:...
, Hamburg
Hamburg
-History:The first historic name for the city was, according to Claudius Ptolemy's reports, Treva.But the city takes its modern name, Hamburg, from the first permanent building on the site, a castle whose construction was ordered by the Emperor Charlemagne in AD 808...
and Lübeck
Lübeck
The Hanseatic City of Lübeck is the second-largest city in Schleswig-Holstein, in northern Germany, and one of the major ports of Germany. It was for several centuries the "capital" of the Hanseatic League and, because of its Brick Gothic architectural heritage, is listed by UNESCO as a World...
each using its municipal coat of arms. Many of the smaller states issued coins in very small numbers and these are thus extremely rare and valuable. The Principality of Lippe
Principality of Lippe
Lippe was a historical state in Germany. It was located between the Weser River and the southeast part of the Teutoburg forest.-History:...
was the only state not to issue any gold coins in this period.

Silver coins were minted in .900 fineness to a standard of 5 grams silver per Mark. Production of 2 and 5 Mark coins ceased in 1915 while 1 Mark coins continued to be issued until 1916. A few 3 Mark coins was minted until 1918, and ½ Mark coins continued to be issued in silver until 1919.
The 3 Mark coin was introduced as a replacement for the Vereinsthaler
Vereinsthaler
The Vereinsthaler was a standard silver coin used in most German states and the Austrian Empire in the years prior to German unification.- Introduction :...
coins of the previous currency, whose silver content was slightly more than that of the 3 Mark coin.

The 5 Mark coin, however, was significantly closer in value to older Thalers (and other such crown-sized coins).

Banknotes were issued by the Imperial Treasury (known as "Reichskassenschein") and the Reichsbank
Reichsbank
The Reichsbank was the central bank of Germany from 1876 until 1945. It was founded on 1 January 1876 . The Reichsbank was a privately owned central bank of Prussia, under close control by the Reich government. Its first president was Hermann von Dechend...
, as well as by the banks of some of the states. Imperial Treasury notes were issued in denominations of 5, 10, 20 and 50 Mark, whilst Reichsbank notes were produced in denominations of 20, 50, 100 and 1000 Mark. The notes issued after 1914 are referred to as Papiermark
German papiermark
The name Papiermark is applied to the German currency from the 4th August 1914 when the link between the Mark and gold was abandoned, due to the outbreak of World War I...
.

In Unicode, the Mark sign is . The pfennig is .