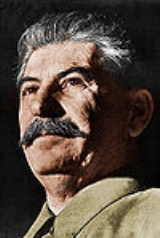 In its first two incarnations the office performed mostly secretarial work. The post of Responsible Secretary was then established in 1919 to perform administrative work. In 1922 the office of General Secretary followed as a purely administrative and disciplinary position, whose role was to do no more than determine party membership composition. Stalin, its first incumbent, used the principles of democratic centralism
Democratic centralism
Democratic centralism is the name given to the principles of internal organization used by Leninist political parties, and the term is sometimes used as a synonym for any Leninist policy inside a political party...
to transform his office into that of party leader, and later leader of the Soviet Union. In 1934, the 17th Party Congress did not elect a General Secretary and Stalin was an ordinary secretary since then, although he remained a de-facto leader without diminishing his own authority.

In order to test Georgy Malenkov
Georgy Malenkov
Georgy Maximilianovich Malenkov was a Soviet politician, Communist Party leader and close collaborator of Joseph Stalin. After Stalin's death, he became Premier of the Soviet Union and was in 1953 briefly considered the most powerful Soviet politician before being overshadowed by Nikita...
as a potential successor, in the 1950s, Stalin increasingly withdrew from Secretariat business, leaving the supervision of the body to him. In October 1952 Stalin restructured the party's leadership and formally abolished the office of General Secretary. When Stalin died on 5 March 1953, Malenkov was the most important member of the Secretariat, which also included Nikita Khrushchev
Nikita Khrushchev
Nikita Sergeyevich Khrushchev led the Soviet Union during part of the Cold War. He served as First Secretary of the Communist Party of the Soviet Union from 1953 to 1964, and as Chairman of the Council of Ministers, or Premier, from 1958 to 1964...
among others. Malenkov became Chairman of the Council of Ministers but was forced to resign from the Secretariat on 14 March 1953, leaving Khrushchev in effective control of the body. Khrushchev was elected First Secretary at the Central Committee plenum on 14 September 1953. Originally conceived as a collective leadership
Collective leadership
Collective leadership or Collectivity of leadership , was considered an ideal form of governance in the Union of Soviet Socialist Republics...
, Khrushchev removed his rivals from power in both 1955 and 1957 and reinforced the supremacy of the First Secretary.