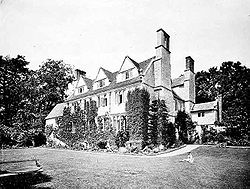 Garsington Manor, in the village of Garsington
Garsington
Garsington is a village and civil parish about southeast of Oxford in Oxfordshire.-Notable Garsington buildings:The earliest part of the Church of England parish church of Saint Mary is the Norman tower, built towards the end of the 12th century. The Gothic Revival architect Joseph Clarke restored...
, near Oxford, England, is a Tudor
Tudor dynasty
The Tudor dynasty or House of Tudor was a European royal house of Welsh origin that ruled the Kingdom of England and its realms, including the Lordship of Ireland, later the Kingdom of Ireland, from 1485 until 1603. Its first monarch was Henry Tudor, a descendant through his mother of a legitimised...
building, best known as the former home of Lady Ottoline Morrell
Lady Ottoline Morrell
The Lady Ottoline Violet Anne Morrell was an English aristocrat and society hostess. Her patronage was influential in artistic and intellectual circles, where she befriended writers such as Aldous Huxley, Siegfried Sassoon, T. S. Eliot and D. H...
, the Bloomsbury Group
Bloomsbury Group
The Bloomsbury Group or Bloomsbury Set was a group of writers, intellectuals, philosophers and artists who held informal discussions in Bloomsbury throughout the 20th century. This English collective of friends and relatives lived, worked or studied near Bloomsbury in London during the first half...
socialite. The house is currently owned by the family of the late Leonard Ingrams
Leonard Ingrams
Leonard Victor Ingrams was a merchant banker and opera festival founder/impresario.Leonard Ingrams was the youngest of four sons. His parents were Leonard St Clair Ingrams and Victoria . His mother was very musical and he started to learn the violin at the age of six...
and has been the setting for an annual summer opera season, the Garsington Opera
Garsington Opera
Garsington Opera is an annual open air summer opera festival founded in 1989 by Leonard Ingrams. For twenty one years it was held in the gardens of Leonard Ingrams' home at Garsington Manor in Oxfordshire. Since 2011 the festival is now held in Wormsley Park, the home of the Getty family near High...
up until 2011 when the opera relocated to Wormsley, the home of Mark Getty in Oxfordshire.

They completely restored it in the 1920s, creating landscaped Italian-style garden
Garden
A garden is a planned space, usually outdoors, set aside for the display, cultivation, and enjoyment of plants and other forms of nature. The garden can incorporate both natural and man-made materials. The most common form today is known as a residential garden, but the term garden has...
s. The parterre
Parterre
A parterre is a formal garden construction on a level surface consisting of planting beds, edged in stone or tightly clipped hedging, and gravel paths arranged to form a pleasing, usually symmetrical pattern. Parterres need not have any flowers at all...
has 24 square beds with Irish yew
Taxus
Taxus is a genus of yews, small coniferous trees or shrubs in the yew family Taxaceae. They are relatively slow-growing and can be very long-lived, and reach heights of 1-40 m, with trunk diameters of up to 4 m...
s at the corners; the Italian garden has a large ornamental pool enclosed by yew hedges and set about with statues; beyond, is a wild garden, with lime-tree avenues
Avenue (landscape)
__notoc__In landscaping, an avenue or allée is traditionally a straight route with a line of trees or large shrubs running along each, which is used, as its French source venir indicates, to emphasize the "coming to," or arrival at a landscape or architectural feature...
, shrubs, a stream and pond.

Garsington became a haven for the Morrells’ friends, including D. H. Lawrence
D. H. Lawrence
David Herbert Richards Lawrence was an English novelist, poet, playwright, essayist, literary critic and painter who published as D. H. Lawrence. His collected works represent an extended reflection upon the dehumanising effects of modernity and industrialisation...
, Siegfried Sassoon
Siegfried Sassoon
Siegfried Loraine Sassoon CBE MC was an English poet, author and soldier. Decorated for bravery on the Western Front, he became one of the leading poets of the First World War. His poetry both described the horrors of the trenches, and satirised the patriotic pretensions of those who, in Sassoon's...
, Lytton Strachey
Lytton Strachey
Giles Lytton Strachey was a British writer and critic. He is best known for establishing a new form of biography in which psychological insight and sympathy are combined with irreverence and wit...
, Aldous Huxley
Aldous Huxley
Aldous Leonard Huxley was an English writer and one of the most prominent members of the famous Huxley family. Best known for his novels including Brave New World and a wide-ranging output of essays, Huxley also edited the magazine Oxford Poetry, and published short stories, poetry, travel...
, Mark Gertler, and Bertrand Russell
Bertrand Russell
Bertrand Arthur William Russell, 3rd Earl Russell, OM, FRS was a British philosopher, logician, mathematician, historian, and social critic. At various points in his life he considered himself a liberal, a socialist, and a pacifist, but he also admitted that he had never been any of these things...
. In 1916, they invited conscientious objector
Conscientious objector
A conscientious objector is an "individual who has claimed the right to refuse to perform military service" on the grounds of freedom of thought, conscience, and/or religion....
s, including Clive Bell
Clive Bell
Arthur Clive Heward Bell was an English Art critic, associated with formalism and the Bloomsbury Group.- Origins :Clive Bell was born in East Shefford, Berkshire, in 1881...
and other "Bloomsberries"
Bloomsbury Group
The Bloomsbury Group or Bloomsbury Set was a group of writers, intellectuals, philosophers and artists who held informal discussions in Bloomsbury throughout the 20th century. This English collective of friends and relatives lived, worked or studied near Bloomsbury in London during the first half...
, to come and work on the home farm for the duration of World War I
World War I
World War I , which was predominantly called the World War or the Great War from its occurrence until 1939, and the First World War or World War I thereafter, was a major war centred in Europe that began on 28 July 1914 and lasted until 11 November 1918...
, to avoid prosecution. Aldous Huxley spent some time here before he wrote Crome Yellow
Crome Yellow
Crome Yellow is the first novel by British author Aldous Huxley. It was published in 1921. In the book, Huxley satirises the fads and fashions of the time. It is the witty story of a house party at "Crome"...
a book which contains a ridiculous character which is an obvious satire of Lady Ottoline Morrell and her entertaining at Garsington; she never forgave him. The Morrells moved out in 1928. The house was then owned by the late Sir John Wheeler-Bennett until it was sold in 1981 to Leonard and Rosalind Ingrams and their family.