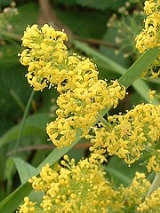 Encyclopedia
Galium verum is a herbaceous perennial plant
Perennial plant
A perennial plant or simply perennial is a plant that lives for more than two years. The term is often used to differentiate a plant from shorter lived annuals and biennials. The term is sometimes misused by commercial gardeners or horticulturalists to describe only herbaceous perennials...
of the family Rubiaceae
Rubiaceae
The Rubiaceae is a family of flowering plants, variously called the coffee family, madder family, or bedstraw family. The group contains many commonly known plants, including the economically important coffee , quinine , and gambier , and the horticulturally valuable madder , west indian jasmine ,...
, native to Europe
Europe
Europe is, by convention, one of the world's seven continents. Comprising the westernmost peninsula of Eurasia, Europe is generally 'divided' from Asia to its east by the watershed divides of the Ural and Caucasus Mountains, the Ural River, the Caspian and Black Seas, and the waterways connecting...
and Asia
Asia
Asia is the world's largest and most populous continent, located primarily in the eastern and northern hemispheres. It covers 8.7% of the Earth's total surface area and with approximately 3.879 billion people, it hosts 60% of the world's current human population...
. It is a low scrambling plant, with the stems growing to 60–120 cm (23.6–47.2 ) long, frequently rooting where they touch the ground. The leaves
Leaf
A leaf is an organ of a vascular plant, as defined in botanical terms, and in particular in plant morphology. Foliage is a mass noun that refers to leaves as a feature of plants....
are 1 centimetre long and 2 millimetre (0.078740157480315 in) broad, shiny dark green, hairy underneath, borne in whorls of 8–12. The flower
Flower
A flower, sometimes known as a bloom or blossom, is the reproductive structure found in flowering plants . The biological function of a flower is to effect reproduction, usually by providing a mechanism for the union of sperm with eggs...
s are 2 millimetre in diameter, yellow, and produced in dense clusters. This species is sometimes confused with Galium odoratum, a species with traditional culinary uses.

In the past the dried plants were used to stuff mattresses, as the coumarin
Coumarin
Coumarin is a fragrant chemical compound in the benzopyrone chemical class, found in many plants, notably in high concentration in the tonka bean , vanilla grass , sweet woodruff , mullein , sweet grass , cassia cinnamon and sweet clover...
scent of the plants acts as a flea
Flea
Flea is the common name for insects of the order Siphonaptera which are wingless insects with mouthparts adapted for piercing skin and sucking blood...
killer. The flowers were also used to coagulate milk
Milk
Milk is a white liquid produced by the mammary glands of mammals. It is the primary source of nutrition for young mammals before they are able to digest other types of food. Early-lactation milk contains colostrum, which carries the mother's antibodies to the baby and can reduce the risk of many...
in cheese
Cheese
Cheese is a generic term for a diverse group of milk-based food products. Cheese is produced throughout the world in wide-ranging flavors, textures, and forms....
manufacture and, in Gloucestershire
Gloucestershire
Gloucestershire is a county in South West England. The county comprises part of the Cotswold Hills, part of the flat fertile valley of the River Severn, and the entire Forest of Dean....
, to colour the cheese Double Gloucester.
The plant is also used to make red madder
Madder
Rubia is a genus of the madder family Rubiaceae, which contains about 60 species of perennial scrambling or climbing herbs and sub-shrubs native to the Old World, Africa, temperate Asia and America...
-like and yellow dyes.
In Denmark
Denmark
Denmark is a Scandinavian country in Northern Europe. The countries of Denmark and Greenland, as well as the Faroe Islands, constitute the Kingdom of Denmark . It is the southernmost of the Nordic countries, southwest of Sweden and south of Norway, and bordered to the south by Germany. Denmark...
, the plant (known locally as ) is traditionally used to infuse spirits, making the uniquely Danish drink .

Frigg
Frigg
Frigg is a major goddess in Norse paganism, a subset of Germanic paganism. She is said to be the wife of Odin, and is the "foremost among the goddesses" and the queen of Asgard. Frigg appears primarily in Norse mythological stories as a wife and a mother. She is also described as having the power...
was the goddess of married women, in Norse mythology
Norse mythology
Norse mythology, a subset of Germanic mythology, is the overall term for the myths, legends and beliefs about supernatural beings of Norse pagans. It flourished prior to the Christianization of Scandinavia, during the Early Middle Ages, and passed into Nordic folklore, with some aspects surviving...
. She helped women give birth to children, and as Scandinavians used the plant Lady's Bedstraw (Galium verum) as a sedative, they called it Frigg's grass.