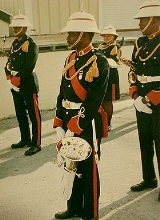 Encyclopedia
Full dress is a category dress code
Dress code (Western)
A dress code is a set of rules governing what garments may be worn together and in what setting. Examples of dress codes are combinations such as "smart casual", or "morning dress". A classification of these codes is normally made for varying levels of formality and times of day...
s that refers to most formal clothing available in Western society.

For a civilian, during the Victorian and Edwardian period, this corresponded to a frock coat
Frock coat
A frock coat is a man's coat characterised by knee-length skirts all around the base, popular during the Victorian and Edwardian periods. The double-breasted style is sometimes called a Prince Albert . The frock coat is a fitted, long-sleeved coat with a centre vent at the back, and some features...
in the day, and white tie
White tie
White tie is the most formal evening dress code in Western fashion. It is worn to ceremonial occasions such as state dinners in some countries, as well as to very formal balls and evening weddings...
at night. When morning dress
Morning dress
Morning dress is the daytime formal dress code, consisting chiefly for men of a morning coat, waistcoat, and striped trousers, and an appropriate dress for women...
(in the modern sense, using a morning tailcoat rather than a frock coat) became common, it was less formal than a frock coat, and even when this was phased out, morning dress never achieved full dress status. In the twenty-first century, full dress therefore unambiguously refers to white tie.

Full dress uniform is a special military uniform
Military uniform
Military uniforms comprises standardised dress worn by members of the armed forces and paramilitaries of various nations. Military dress and military styles have gone through great changes over the centuries from colourful and elaborate to extremely utilitarian...
reserved for parade
Parade (military)
A military parade is a formation of soldiers whose movement is restricted by close-order manouevering known as drilling or marching. The American usage is "formation or military review". The military parade is now mostly ceremonial, though soldiers from time immemorial up until the late 19th...
or other ceremonial occasions. Prior to World War I
World War I
World War I , which was predominantly called the World War or the Great War from its occurrence until 1939, and the First World War or World War I thereafter, was a major war centred in Europe that began on 28 July 1914 and lasted until 11 November 1918...
(1914–18) most armies
Army
An army An army An army (from Latin arma "arms, weapons" via Old French armée, "armed" (feminine), in the broadest sense, is the land-based military of a nation or state. It may also include other branches of the military such as the air force via means of aviation corps...
of the world retained uniforms of this type that were usually more colorful and elaborate than the ordinary duty ("undress") or the increasingly drab active service ("field") uniforms.

The British
British Army
The British Army is the land warfare branch of Her Majesty's Armed Forces in the United Kingdom. It came into being with the unification of the Kingdom of England and Scotland into the Kingdom of Great Britain in 1707. The new British Army incorporated Regiments that had already existed in England...
and United States armies
United States Army
The United States Army is the main branch of the United States Armed Forces responsible for land-based military operations. It is the largest and oldest established branch of the U.S. military, and is one of seven U.S. uniformed services...
were dependent upon voluntary recruiting
Military recruitment
Military recruitment is the act of requesting people, usually male adults, to join a military voluntarily. Involuntary military recruitment is known as conscription. Many countries that have abolished conscription use military recruiters to persuade people to join, often at an early age. To...
and found that a smart dress served to attract recruits and improve morale amongst those already serving. The British regimental system
Regiment
A regiment is a major tactical military unit, composed of variable numbers of batteries, squadrons or battalions, commanded by a colonel or lieutenant colonel...
fostered numerous distinctions amongst different units.

Even the mainly conscript
Conscription
Conscription is the compulsory enlistment of people in some sort of national service, most often military service. Conscription dates back to antiquity and continues in some countries to the present day under various names...
armies of continental Europe retained many of the colourful features that had evolved during the nineteenth century, for reasons of national and unit pride. Thus, in 1913 most French soldiers
French Army
The French Army, officially the Armée de Terre , is the land-based and largest component of the French Armed Forces.As of 2010, the army employs 123,100 regulars, 18,350 part-time reservists and 7,700 Legionnaires. All soldiers are professionals, following the suspension of conscription, voted in...
wore red trousers and kepi
Kepi
The kepi is a cap with a flat circular top and a visor or peak . Etymologically, the word is a borrowing of the French képi, itself a respelling of the Alemannic Käppi: a diminutive form of Kappe, meaning "cap"....
s as part of their full dress, the majority of British foot regiments retained scarlet tunics for parade and off duty ("walking out"), the German Army
German Army (German Empire)
The German Army was the name given the combined land forces of the German Empire, also known as the National Army , Imperial Army or Imperial German Army. The term "Deutsches Heer" is also used for the modern German Army, the land component of the German Bundeswehr...
was characterised by Prussian blue
Prussian blue
Prussian blue is a dark blue pigment with the idealized formula Fe718. Another name for the color Prussian blue is Berlin blue or, in painting, Parisian blue. Turnbull's blue is the same substance but is made from different reagents....
, the Russian
Military history of Imperial Russia
The Military history of the Russian Empire encompasses the history of armed conflict in which the Empire participated. This history stretches from its creation in 1721 by Peter the Great, until the Russian Revolution , which led to the establishment of the Soviet Union...
by dark green, et cetera.

There were usually exceptions to each of these rules, often distinguishing elite units. Thus German cuirassier
Cuirassier
Cuirassiers were mounted cavalry soldiers equipped with armour and firearms, first appearing in late 15th-century Europe. They were the successors of the medieval armoured knights...
s wore white full dress, British rifle regiments a very dark green known as rifle green, French mountain troops large berets and light blue trousers and so on. The U.S. Army with its smart but relatively sober "dress blues" was an exception, with cavalry
Cavalry
Cavalry or horsemen were soldiers or warriors who fought mounted on horseback. Cavalry were historically the third oldest and the most mobile of the combat arms...
, artillery
Artillery
Originally applied to any group of infantry primarily armed with projectile weapons, artillery has over time become limited in meaning to refer only to those engines of war that operate by projection of munitions far beyond the range of effect of personal weapons...
and infantry
Infantry
Infantrymen are soldiers who are specifically trained for the role of fighting on foot to engage the enemy face to face and have historically borne the brunt of the casualties of combat in wars. As the oldest branch of combat arms, they are the backbone of armies...
being distinguished only by the different branch colors.

After World War I most full dress uniforms disappeared. Many of the Imperial or Royal regimes that had taken a particular pride in the retention of colorful traditional uniforms had been overthrown and their republic
Republic
A republic is a form of government in which the people, or some significant portion of them, have supreme control over the government and where offices of state are elected or chosen by elected people. In modern times, a common simplified definition of a republic is a government where the head of...
an, fascist
Fascism
Fascism is a radical authoritarian nationalist political ideology. Fascists seek to rejuvenate their nation based on commitment to the national community as an organic entity, in which individuals are bound together in national identity by suprapersonal connections of ancestry, culture, and blood...
, or communist
Communism
Communism is a social, political and economic ideology that aims at the establishment of a classless, moneyless, revolutionary and stateless socialist society structured upon common ownership of the means of production...
successors had little incentive to retain old glories. Elsewhere cost and disillusion with the "peacock" aspects of old fashioned soldiering had a similar effect, except for ceremonial guard units and such limited exceptions as officers' evening or off-duty uniforms.

Modern armies are characterised by simple and drab coloured dress even for ceremonial occasion, with the exceptions noted above. However a general trend towards replacing conscript armies with long serving professionals has had, as a side effect, a reversion to dress uniforms that combine smartness with some traditional features. Thus the U.S. Army has recently (2006) announced that uniforms of modern cut but in the traditional dark and light blue colours will become universal issue, replacing the previous grey/green service dress. The French Army
French Army
The French Army, officially the Armée de Terre , is the land-based and largest component of the French Armed Forces.As of 2010, the army employs 123,100 regulars, 18,350 part-time reservists and 7,700 Legionnaires. All soldiers are professionals, following the suspension of conscription, voted in...
has, with the abolition of conscription, reintroduced kepis, fringed epaulettes and sashes in traditional colours to wear with camouflage "trellis" or light beige parade dress. The British Army with its strong regimental system has retained a wide range of special features and dress items to distinguish individual units, in spite of recent amalgamations. Although there still exists official patterns for full dress uniforms for each unit within the British Army, the uniform is rarely if ever issued, and is usually only worn for by regiments which are often on public duties
Public duties
Public duties are performed by military personnel, and usually have a ceremonial or historic significance rather than an overtly operational role.-Germany:...
, such as the Guards Division
Guards Division
The Guards Division is an administrative unit of the British Army responsible for the administration of the regiments of Foot Guards and the London Regiment.-Introduction:...
, or Regimental Bands and Corps of Drums
Corps of Drums
A Corps of Drums is a type of military band, which originated in European armies in the 16th century. The main instruments of a Corps of Drums are the drum and the flute or fife. Unlike 'full' military marching bands, Corps of Drums exist within an infantry battalion. A Drum major is the leader of...
, which are bought from the Regiment's allowance.
The source of this article is wikipedia, the free encyclopedia.  The text of this article is licensed under the GFDL.