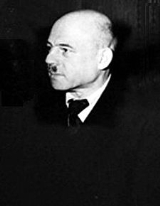 Encyclopedia
Ernst Friedrich Christoph "Fritz" Sauckel (27 October 1894 – 16 October 1946) was a Nazi war criminal, who organized the systematic enslavement
Slavery
Slavery is a system under which people are treated as property to be bought and sold, and are forced to work. Slaves can be held against their will from the time of their capture, purchase or birth, and deprived of the right to leave, to refuse to work, or to demand compensation...
of millions from lands occupied by Nazi Germany
Nazi Germany
Nazi Germany , also known as the Third Reich , but officially called German Reich from 1933 to 1943 and Greater German Reich from 26 June 1943 onward, is the name commonly used to refer to the state of Germany from 1933 to 1945, when it was a totalitarian dictatorship ruled by...
. He was General Plenipotentiary for Labour Deployment from 1942 until the end of the war, after which he was tried and executed.

He was born in Haßfurt
Haßfurt
Haßfurt is a town in Bavaria, Germany, capital of the Haßberge district. It is situated on the river Main, 20 km east of Schweinfurt and 30 km northwest of Bamberg. In 1852, Ludwig's Western Railway reached the town and between 1892 and 1995 it also had a branch line to Hofheim...
(Kingdom of Bavaria
Kingdom of Bavaria
The Kingdom of Bavaria was a German state that existed from 1806 to 1918. The Bavarian Elector Maximilian IV Joseph of the House of Wittelsbach became the first King of Bavaria in 1806 as Maximilian I Joseph. The monarchy would remain held by the Wittelsbachs until the kingdom's dissolution in 1918...
), the only child of a postman and a seamstress. Sauckel was educated at local schools and left early when his mother fell ill. He joined the merchant marine of Norway
Norway
Norway , officially the Kingdom of Norway, is a Nordic unitary constitutional monarchy whose territory comprises the western portion of the Scandinavian Peninsula, Jan Mayen, and the Arctic archipelago of Svalbard and Bouvet Island. Norway has a total area of and a population of about 4.9 million...
and Sweden
Sweden
Sweden , officially the Kingdom of Sweden , is a Nordic country on the Scandinavian Peninsula in Northern Europe. Sweden borders with Norway and Finland and is connected to Denmark by a bridge-tunnel across the Öresund....
at age fifteen, first on a Norwegian three-masted schooner
Schooner
A schooner is a type of sailing vessel characterized by the use of fore-and-aft sails on two or more masts with the forward mast being no taller than the rear masts....
, and later on Swedish and German vessels. He went on to sail throughout the world, rising to the rank of Vollmatrose. At the outbreak of World War I
World War I
World War I , which was predominantly called the World War or the Great War from its occurrence until 1939, and the First World War or World War I thereafter, was a major war centred in Europe that began on 28 July 1914 and lasted until 11 November 1918...
, he was on a German vessel en route to Australia
Australia
Australia , officially the Commonwealth of Australia, is a country in the Southern Hemisphere comprising the mainland of the Australian continent, the island of Tasmania, and numerous smaller islands in the Indian and Pacific Oceans. It is the world's sixth-largest country by total area...
when the vessel was captured. He was subsequently interned
Internment
Internment is the imprisonment or confinement of people, commonly in large groups, without trial. The Oxford English Dictionary gives the meaning as: "The action of 'interning'; confinement within the limits of a country or place." Most modern usage is about individuals, and there is a distinction...
in France from August 1914 until November 1919.

He returned to Germany, found factory work in Schweinfurt
Schweinfurt
Schweinfurt is a city in the Lower Franconia region of Bavaria in Germany on the right bank of the canalized Main, which is here spanned by several bridges, 27 km northeast of Würzburg.- History :...
, and studied engineering in Ilmenau
Ilmenau
Ilmenau is a town located in the district of Ilm-Kreis, Thuringia, Germany.Ilmenau is situated in the valley of the Ilm river, at an altitude of 431 metres above sea level, and is the biggest town in Ilm-Kreis district, with 6,200 students studying at the Technische Universität Ilmenau. The...
from 1922 to 1923. He joined the National Socialist German Workers Party
National Socialist German Workers Party
The National Socialist German Workers' Party , commonly known in English as the Nazi Party, was a political party in Germany between 1920 and 1945. Its predecessor, the German Workers' Party , existed from 1919 to 1920...
(NSDAP) in 1923 (member 1,395). In 1924 he married Elisabeth Wetzel, with whom he had ten children. He remained a party member over its dissolution and publicly rejoined in 1925. Sauckel was appointed party Gauleiter
Gauleiter
A Gauleiter was the party leader of a regional branch of the NSDAP or the head of a Gau or of a Reichsgau.-Creation and Early Usage:...
of Thüringia
Thuringia
The Free State of Thuringia is a state of Germany, located in the central part of the country.It has an area of and 2.29 million inhabitants, making it the sixth smallest by area and the fifth smallest by population of Germany's sixteen states....
in 1927 and became a member of the regional government in 1929. Following the Nazi seizure of power in 1933, he was promoted to Reich Regent of Thüringia and Reichstag
Reichstag (Weimar Republic)
The Reichstag was the parliament of Weimar Republic .German constitution commentators consider only the Reichstag and now the Bundestag the German parliament. Another organ deals with legislation too: in 1867-1918 the Bundesrat, in 1919–1933 the Reichsrat and from 1949 on the Bundesrat...
member. He was also given an honorary rank of Obergruppenführer
Obergruppenführer
Obergruppenführer was a Nazi Party paramilitary rank that was first created in 1932 as a rank of the SA and until 1942 it was the highest SS rank inferior only to Reichsführer-SS...
in the SA
Sturmabteilung
The Sturmabteilung functioned as a paramilitary organization of the National Socialist German Workers' Party . It played a key role in Adolf Hitler's rise to power in the 1920s and 1930s...
and the SS in 1934.

During World War II
World War II
World War II, or the Second World War , was a global conflict lasting from 1939 to 1945, involving most of the world's nations—including all of the great powers—eventually forming two opposing military alliances: the Allies and the Axis...
he was Reich defence commissioner for the Kassel
Kassel
Kassel is a town located on the Fulda River in northern Hesse, Germany. It is the administrative seat of the Kassel Regierungsbezirk and the Kreis of the same name and has approximately 195,000 inhabitants.- History :...
district (Reichsverteidigungskommissar Wehrkreis IX) before being appointed General Plenipotentiary for Labour Deployment (Generalbevollmächtigter für den Arbeitseinsatz) on 21 March 1942, on the recommendation of Martin Bormann
Martin Bormann
Martin Ludwig Bormann was a prominent Nazi official. He became head of the Party Chancellery and private secretary to Adolf Hitler...
. He worked directly under Hitler through the Four-Year Plan Office, directing and controlling German labour. In response to increased demands, he met the requirement for manpower with people from the occupied territories. Voluntary numbers were insufficient and forced recruitment was introduced within a few months. Of the 5 million workers brought to Germany, around 200,000 came voluntarily. The majority of the acquired workers originated from the Eastern territories, where the methods used to gain workers were reportedly very harsh.

He was a defendant at the Nuremberg trials
Nuremberg Trials
The Nuremberg Trials were a series of military tribunals, held by the victorious Allied forces of World War II, most notable for the prosecution of prominent members of the political, military, and economic leadership of the defeated Nazi Germany....
accused of conspiracy to commit crimes against peace; planning, initiating and waging wars of aggression; war crimes and crimes against humanity. He defended the Arbeitseinsatz
Arbeitseinsatz
Arbeitseinsatz was forced labour during World War II when German men were called up for military service and German authorities rounded up labourers, some from Germany but more from the occupied territories, to fill in the vacancies...
as "nothing to do with exploitation. It is an economic process for supplying labour". He denied that it was slave labour or that it was common to deliberately work people to death (extermination by labour) or to mistreat them.

After a defense led by Robert Servatius
Robert Servatius
Robert Servatius was a German lawyer, prominent in his profession in Cologne.-Life:Servatius was born in Cologne on 31 October 1894. In the First World War he served as an artillery officer, and during the Second World War returned to military service, rising to the rank of Major...
, Sauckel was found guilty of war crimes and crimes against humanity, and together with a number of colleagues was hanged on 16 October 1946. His last words were recorded as "Ich sterbe unschuldig, mein Urteil ist ungerecht. Gott beschütze Deutschland!" (I die an innocent man, my sentence is unjust. God protect Germany!).

Fritz Sauckel's sentence has been much the contentious subject among historians. Sauckel's ministerial responsibilities were part of Göring's "Four Year Plan" the so-called economic solution for greater Germany. The common misconception is that Albert Speer was his direct superior on account of his demands to meet the quota of foreign labourers in his munitions divisions. This assertion is incorrect, as Göring was effectively his direct superior. It is true that Speer inherited vital economic responsibility from Göring with his assumption as minister of armaments, but the policy of acquiring foreign labour was enabled by then armaments minister Fritz Todt and Hermann Göring. Moreover, the mistreatment of dragooned prisoners was ultimately left up to the discretion of the respective commandant of the division, not Sauckel. He expressly stated in a memorandum to his delegates of foreign labour that the men and women be treated accordingly with adequate care.

Fritz Sauckel has been portrayed by the following actors in film, television and theater productions;