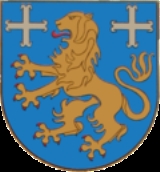 In 1438 in the northern part of today's Landkreis Friesland the Lordship of Jever was founded. East Frisia was from then on regarded as a hostile territory, and lots of skirmishes between Jever and East Frisia took place during the 15th and 16th centuries. The last ruler of Jever was Mary of Jever, who ruled until 1575.

After her death Jever became a part of Oldenburg
Oldenburg (state)
Oldenburg — named after its capital, the town of Oldenburg — was a state in the north of present-day Germany. Oldenburg survived from 1180 until 1918 as a county, duchy and grand duchy, and from 1918 until 1946 as a free state. It was located near the mouth of the River Weser...
, but East Frisia made a claim for the territory as well. In the following decades East Frisia tried to block all roads between Jever and Oldenburg. It was not before the 17th century that the hostilities between East Frisia and Oldenburg ended.

From 1667 to 1793 Jever was an exclave of Anhalt-Zerbst
Anhalt-Zerbst
Anhalt-Zerbst was a district in Saxony-Anhalt, Germany. It is bounded by the districts Potsdam-Mittelmark and Wittenberg, the city of Dessau and the districts of Köthen, Schönebeck and Jerichower Land.- History :...
, and after Napoleonic occupation
Kingdom of Holland
The Kingdom of Holland 1806–1810 was set up by Napoleon Bonaparte as a puppet kingdom for his third brother, Louis Bonaparte, in order to better control the Netherlands. The name of the leading province, Holland, was now taken for the whole country...
the westernmost exclave of Russia
Russia
Russia or , officially known as both Russia and the Russian Federation , is a country in northern Eurasia. It is a federal semi-presidential republic, comprising 83 federal subjects...
. In 1818 Jever became a part of Oldenburg again.

The southern part of today's District of Friesland is the "Friesische Wehde" ("Frisian Woods"), which also was most of the time part of Oldenburg. This region later formed the District of Varel.

The District was established in 1933 by merging the former districts of Jever and Varel under the name of "Friesland". In 1977 it was dissolved and divided between the neighbouring districts of Wittmund
Wittmund (district)
Wittmund is a Landkreis in the northwestern part of Lower Saxony, Germany. It is situated in East Frisia, on the North Sea coast. Neighboring districts are Friesland, Leer and Aurich.-Geography:...
and Ammerland
Ammerland
Ammerland is a district in Lower Saxony, Germany. It is bounded by the city of Oldenburg and the districts of Oldenburg, Cloppenburg, Leer, Friesland and Wesermarsch.- History :...
. The dissolution was declared unconstitutional in 1979 because it violated the rights of the former State of Oldenburg, and the District was re-established in its old boundaries in 1980.

The inhabitants of Friesland insist that they are not a part of East Frisia. This is somewhat confusing, since Friesland is situated east of East Frisia, and geographers regard Friesland as a part of that region. The distinction has historical reasons: Friesland was an independent state from 1438 to 1575 (see above for details). Then and afterwards the region bore the name "Friesland", although this is also the German name for the entire Frisia
Frisia
Frisia is a coastal region along the southeastern corner of the North Sea, i.e. the German Bight. Frisia is the traditional homeland of the Frisians, a Germanic people who speak Frisian, a language group closely related to the English language...
.

Part of the District is in the Lower Saxony Wadden Sea National Park.

The lion is from the arms of the chieftains of Jever; it was the symbol of the Lordship of Jever. The blazon
Blazon
In heraldry and heraldic vexillology, a blazon is a formal description of a coat of arms, flag or similar emblem, from which the reader can reconstruct the appropriate image...
of the arms is: "Azure, a lion
Lion
The lion is one of the four big cats in the genus Panthera, and a member of the family Felidae. With some males exceeding 250 kg in weight, it is the second-largest living cat after the tiger...
rampant Or, armed and langued Gules, and in chief two Greek crosses Argent".