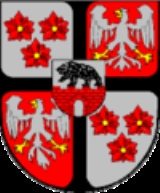 Catherine II of Russia
Russia
Russia or , officially known as both Russia and the Russian Federation , is a country in northern Eurasia. It is a federal semi-presidential republic, comprising 83 federal subjects...
was by birth a princess of Anhalt-Zerbst.

Anhalt-Zerbst comprises plain countryside north of the Elbe
Elbe
The Elbe is one of the major rivers of Central Europe. It rises in the Krkonoše Mountains of the northwestern Czech Republic before traversing much of Bohemia , then Germany and flowing into the North Sea at Cuxhaven, 110 km northwest of Hamburg...
River. The Elbe enters the district in the east, runs through the southeastern part and then forms the southern and western border of Anhalt-Zerbst. The Elbe banks within the district are part of the Biosphere Reserve Middle Elbe
Biosphere Reserve Middle Elbe
The Middle Elbe Biosphere Reserve is a Biosphere Reserve in the German Federal state Saxony-Anhalt.The Middle Elbe reserve is a 430 square kilometre protected reserve, and is the largest protected region in Saxony-Anhalt . It extends along the Elbe river, between Wittenberg in the east, via...
. The north is occupied by the southern portions of the Fläming
Fläming
The Fläming Heath is a region and a hill chain that reaches over 100 km from the Elbe river to the Dahme River in the German states Saxony-Anhalt and Brandenburg. Its highest elevation is the Hagelberg...
plateau.