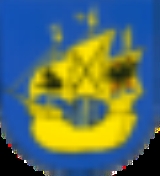 Encyclopedia
Wittmund is a Landkreis
Districts of Germany
The districts of Germany are known as , except in the states of North Rhine-Westphalia and Schleswig-Holstein where they are known simply as ....
(district) in the northwestern part of Lower Saxony
Lower Saxony
Lower Saxony is a German state situated in north-western Germany and is second in area and fourth in population among the sixteen states of Germany...
, Germany
Germany
Germany , officially the Federal Republic of Germany , is a federal parliamentary republic in Europe. The country consists of 16 states while the capital and largest city is Berlin. Germany covers an area of 357,021 km2 and has a largely temperate seasonal climate...
. It is situated in East Frisia
East Frisia
East Frisia or Eastern Friesland is a coastal region in the northwest of the German federal state of Lower Saxony....
, on the North Sea
North Sea
In the southwest, beyond the Straits of Dover, the North Sea becomes the English Channel connecting to the Atlantic Ocean. In the east, it connects to the Baltic Sea via the Skagerrak and Kattegat, narrow straits that separate Denmark from Norway and Sweden respectively...
coast. Neighboring districts are (from the east clockwise) Friesland
Friesland (district)
Friesland is a district in Lower Saxony, Germany. It is bounded by the districts of Wesermarsch, Ammerland, Leer and Wittmund, and by the North Sea...
, Leer
Leer (district)
Leer is a district in Lower Saxony, Germany. It is bounded by the city of Emden, the districts of Aurich, Wittmund, Friesland, Ammerland, Cloppenburg and Emsland, and by the Netherlands ....
and Aurich
Aurich (district)
Aurich is a district in Lower Saxony, Germany. It is bounded by the North Sea, the districts of Wittmund and Leer, and the city of Emden.- History :...
.

The district was created by the Kingdom of Prussia
Kingdom of Prussia
The Kingdom of Prussia was a German kingdom from 1701 to 1918. Until the defeat of Germany in World War I, it comprised almost two-thirds of the area of the German Empire...
in 1885 from the Amt Wittmund, the Amt Esens and the City of Esens. All were previously part of the District of Aurich
Aurich (district)
Aurich is a district in Lower Saxony, Germany. It is bounded by the North Sea, the districts of Wittmund and Leer, and the city of Emden.- History :...
. In 1977 the district was merged with the District of Friesland
Friesland (district)
Friesland is a district in Lower Saxony, Germany. It is bounded by the districts of Wesermarsch, Ammerland, Leer and Wittmund, and by the North Sea...
; however, the merger was not popular. The merger was declared unconstitutional in 1979 because it violated the rights of the former State of Oldenburg
Oldenburg (state)
Oldenburg — named after its capital, the town of Oldenburg — was a state in the north of present-day Germany. Oldenburg survived from 1180 until 1918 as a county, duchy and grand duchy, and from 1918 until 1946 as a free state. It was located near the mouth of the River Weser...
to which Friesland had belonged, and the two districts were re-established in their old boundaries.

The district has a partnership with the district of Schönebeck
Schönebeck (district)
Schönebeck was a district in the middle of Saxony-Anhalt, Germany. Neighboring districts are the district-free city Magdeburg, the districts Jerichower Land, Anhalt-Zerbst, Köthen, Bernburg, Aschersleben-Staßfurt and Bördekreis.- History :The district was created on July 1, 1816, with the capital...
in Saxony-Anhalt
Saxony-Anhalt
Saxony-Anhalt is a landlocked state of Germany. Its capital is Magdeburg and it is surrounded by the German states of Lower Saxony, Brandenburg, Saxony, and Thuringia.Saxony-Anhalt covers an area of...
. It was started with German reunification
German reunification
German reunification was the process in 1990 in which the German Democratic Republic joined the Federal Republic of Germany , and when Berlin reunited into a single city, as provided by its then Grundgesetz constitution Article 23. The start of this process is commonly referred by Germans as die...
in 1990 to help to establish district administration in former East Germany.