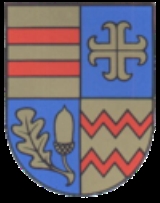 The "Ammerland" was first mentioned in the 10th century. The word is believed to derive from Ameri, which is an old word meaning "swamp". In the time of Viking
Viking
The term Viking is customarily used to refer to the Norse explorers, warriors, merchants, and pirates who raided, traded, explored and settled in wide areas of Europe, Asia and the North Atlantic islands from the late 8th to the mid-11th century.These Norsemen used their famed longships to...
raids small ring-like castles were built in order to protect the defenceless hamlets.

For many years there was little interest in this swampy region. In the 14th century it became part of the County of Oldenburg. The counts established strongholds in the region, which was the frontier against the lands of the untamable Frisia
Frisia
Frisia is a coastal region along the southeastern corner of the North Sea, i.e. the German Bight. Frisia is the traditional homeland of the Frisians, a Germanic people who speak Frisian, a language group closely related to the English language...
ns.

The district was established in 1933 in the rough borders of the historical region.

Ammerland is characterised by a very flat countryside, many fens and swamps, and many windmill
Windmill
A windmill is a machine which converts the energy of wind into rotational energy by means of vanes called sails or blades. Originally windmills were developed for milling grain for food production. In the course of history the windmill was adapted to many other industrial uses. An important...
s. The latter are a symbol of the district, which calls itself sometimes the "land of windmills".