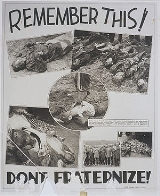 Encyclopedia
Fraternization is "turning people into brothers"—conducting social relations with people who are actually unrelated and/or of a different class
Social class
Social classes are economic or cultural arrangements of groups in society. Class is an essential object of analysis for sociologists, political scientists, economists, anthropologists and social historians. In the social sciences, social class is often discussed in terms of 'social stratification'...
(especially those with whom one works) as though they were sibling
Sibling
Siblings are people who share at least one parent. A male sibling is called a brother; and a female sibling is called a sister. In most societies throughout the world, siblings usually grow up together and spend a good deal of their childhood socializing with one another...
s, family members, personal friends or lovers.

In many institutional contexts (such as militaries
Military
A military is an organization authorized by its greater society to use lethal force, usually including use of weapons, in defending its country by combating actual or perceived threats. The military may have additional functions of use to its greater society, such as advancing a political agenda e.g...
, diplomatic corps
Diplomatic corps
The diplomatic corps or corps diplomatique is the collective body of foreign diplomats accredited to a particular country or body.The diplomatic corps may, in certain contexts, refer to the collection of accredited heads of mission who represent their countries in another state or country...
, parliament
Parliament
A parliament is a legislature, especially in those countries whose system of government is based on the Westminster system modeled after that of the United Kingdom. The name is derived from the French , the action of parler : a parlement is a discussion. The term came to mean a meeting at which...
s, prisons, schools, sports teams, and corporations) this kind of relation transgresses legal, moral or professional norms forbidding certain categories of social contact across socially or legally defined classes. The term often therefore tends to connote impropriety, unprofessionalism or unethical behavior.

For example, "fraternization with the enemy" refers to associations with members of enemy groups and suggests a serious conflict of interest, if not the possibility of treason
Treason
In law, treason is the crime that covers some of the more extreme acts against one's sovereign or nation. Historically, treason also covered the murder of specific social superiors, such as the murder of a husband by his wife. Treason against the king was known as high treason and treason against a...
; while "fraternization with civilians" typically suggests transgression of norms forbidding non-civilians and civilians to form close nonprofessional relationships (e.g., romantically), and "fraternization of officers with enlisted personnel" or "seniors with their juniors" (the usual referent of 'fraternization' in a military context) describes associations which are implied to be irregular, unprofessional, improper or imprudent in ways that negatively affect the members and goals of the organization.

A vast number of institutions worldwide implement policies forbidding forms of fraternization for many specific reasons. Fraternization may be forbidden to maintain image and morale
Morale
Morale, also known as esprit de corps when discussing the morale of a group, is an intangible term used to describe the capacity of people to maintain belief in an institution or a goal, or even in oneself and others...
, to protect and ensure fair and uniform treatment of subordinates, to maintain organizational integrity and the ability to achieve operational goals, and to prevent unauthorized transfers of information. Relations and activities forbidden under these anti-fraternization policies range from romantic and sexual liaisons, through gambling
Gambling
Gambling is the wagering of money or something of material value on an event with an uncertain outcome with the primary intent of winning additional money and/or material goods...
and ongoing business relationships, through insubordination, to excessive familiarity and disrespect of rank.

Views on fraternization are mixed and may depend on the relations and classes under discussion. Organizations may relax, change, or reinforce restrictions to reflect changes in the prevailing organizational view or doctrine regarding fraternization.

Many schools prohibit certain relationships between teachers and students to avoid favoritism, coercion, sexual harassment
Sexual harassment
Sexual harassment, is intimidation, bullying or coercion of a sexual nature, or the unwelcome or inappropriate promise of rewards in exchange for sexual favors. In some contexts or circumstances, sexual harassment is illegal. It includes a range of behavior from seemingly mild transgressions and...
and/or sex crimes enabled by the teacher's position of authority. These prohibitions are controversial, however, as they may come into conflict with rules on tenure
Tenure
Tenure commonly refers to life tenure in a job and specifically to a senior academic's contractual right not to have his or her position terminated without just cause.-19th century:...
(e.g., because unethical conduct is suspected but has not led to a conviction).


Fraternization in the workplace

Court decisions in some U.S. state
U.S. state
A U.S. state is any one of the 50 federated states of the United States of America that share sovereignty with the federal government. Because of this shared sovereignty, an American is a citizen both of the federal entity and of his or her state of domicile. Four states use the official title of...
s have allowed employers a limited legal right to enforce non-fraternization policies among employees (i.e., policies forbidding employees to maintain certain kinds of relationships with each other). Since the 1990s, such corporate policies have been increasingly adopted in the United States in the pursuit of objectives such as protecting professionalism and workplace productivity
Productivity
Productivity is a measure of the efficiency of production. Productivity is a ratio of what is produced to what is required to produce it. Usually this ratio is in the form of an average, expressing the total output divided by the total input...
, promoting gender equality and women's rights
Women's rights
Women's rights are entitlements and freedoms claimed for women and girls of all ages in many societies.In some places these rights are institutionalized or supported by law, local custom, and behaviour, whereas in others they may be ignored or suppressed...
, or avoiding and mitigating the impact of sexual harassment lawsuits. These decisions and the policies they protect have, however, been criticized on various grounds: as illegitimate constraints on individual freedom of association, as tools for companies to punish participation in labor unions, and as expressions of overzealous political correctness
Political correctness
Political correctness is a term which denotes language, ideas, policies, and behavior seen as seeking to minimize social and institutional offense in occupational, gender, racial, cultural, sexual orientation, certain other religions, beliefs or ideologies, disability, and age-related contexts,...
.

Professional and college-level sports teams in the U.S. have enacted anti-fraternization policies between athletes and cheerleaders. Only one professional American Football
American football
American football is a sport played between two teams of eleven with the objective of scoring points by advancing the ball into the opposing team's end zone. Known in the United States simply as football, it may also be referred to informally as gridiron football. The ball can be advanced by...
team, the Oakland Raiders
Oakland Raiders
The Oakland Raiders are a professional American football team based in Oakland, California. They currently play in the Western Division of the American Football Conference in the National Football League...
of the NFL, allows casual contacts between players and cheerleaders. Reasons for this policy include interference with concentration, potential fallout for the images of teams, and the possibility of sex crimes or sexual harassment
Sexual harassment
Sexual harassment, is intimidation, bullying or coercion of a sexual nature, or the unwelcome or inappropriate promise of rewards in exchange for sexual favors. In some contexts or circumstances, sexual harassment is illegal. It includes a range of behavior from seemingly mild transgressions and...
(and attendant legal liability).


U.S. occupation of Germany and Austria 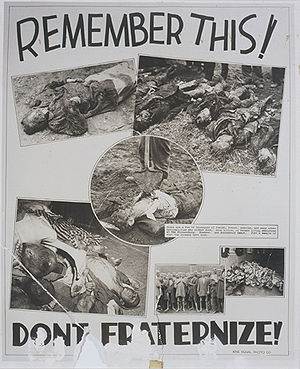 (see
In order to impress the German people with the Allied opinion of them, a strict non-fraternization policy was adhered to by General Dwight D. Eisenhower
Dwight D. Eisenhower
Dwight David "Ike" Eisenhower was the 34th President of the United States, from 1953 until 1961. He was a five-star general in the United States Army...
and the War department. However, thanks to pressure from the State Department and individual U.S. congressmen this policy was eventually lifted in stages. In June 1945 the prohibition against speaking with German children was made less strict. In July it became possible to speak to German adults in certain circumstances. In September the no contact policy was abandoned in Austria and Germany. In the earliest stages of the occupation
Allied Occupation Zones in Germany
The Allied powers who defeated Nazi Germany in World War II divided the country west of the Oder-Neisse line into four occupation zones for administrative purposes during 1945–49. In the closing weeks of fighting in Europe, US forces had pushed beyond the previously agreed boundaries for the...
U.S. soldiers were not allowed to pay maintenance for a child they admitted having fathered
War children
A war child refers to a child born to a native parent and a parent belonging to a foreign military force . It also refers to children of parents collaborating with an occupying force...
, since to do so was considered as "aiding the enemy". Marriages between white U.S. soldiers and Austrian women were not permitted until January 1946, and with German women until December 1946.