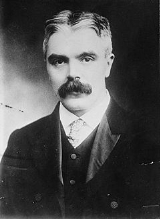 Encyclopedia
Sir Frank Watson Dyson, KBE
Order of the British Empire
The Most Excellent Order of the British Empire is an order of chivalry established on 4 June 1917 by George V of the United Kingdom. The Order comprises five classes in civil and military divisions...
, FRS (8 January 1868 – 25 May 1939) was an English
England
England is a country that is part of the United Kingdom. It shares land borders with Scotland to the north and Wales to the west; the Irish Sea is to the north west, the Celtic Sea to the south west, with the North Sea to the east and the English Channel to the south separating it from continental...
astronomer
Astronomer
An astronomer is a scientist who studies celestial bodies such as planets, stars and galaxies.Historically, astronomy was more concerned with the classification and description of phenomena in the sky, while astrophysics attempted to explain these phenomena and the differences between them using...
and Astronomer Royal
Astronomer Royal
Astronomer Royal is a senior post in the Royal Household of the Sovereign of the United Kingdom. There are two officers, the senior being the Astronomer Royal dating from 22 June 1675; the second is the Astronomer Royal for Scotland dating from 1834....
who is remembered today largely for introducing time signals ("pips") from Greenwich, England, and for the role he played in testing Einstein's theory of general relativity.

Dyson was born in Measham
Measham
Measham is a village in Leicestershire, near the Staffordshire and Derbyshire border, located just off the A42 just south of Ashby-de-la-Zouch, and within the National Forest...
, near Ashby-de-la-Zouch
Ashby-de-la-Zouch
Ashby-de-la-Zouch, — Zouch being pronounced "Zoosh" — often shortened to Ashby, is a small market town and civil parish in North West Leicestershire, England, within the National Forest. It is twinned with Pithiviers in north-central France....
, England. He attended Heath Grammar School
Heath Grammar School
Heath Grammar School, Free School Lane, Halifax, West Yorkshire, England was founded in 1585 by Dr. John Favour. Its full title was The Free Grammar School of Queen Elizabeth at Heath, near Halifax...
, Halifax
Halifax, West Yorkshire
Halifax is a minster town, within the Metropolitan Borough of Calderdale in West Yorkshire, England. It has an urban area population of 82,056 in the 2001 Census. It is well-known as a centre of England's woollen manufacture from the 15th century onward, originally dealing through the Halifax Piece...
, and subsequently won scholarships to Bradford Grammar School
Bradford Grammar School
Bradford Grammar School is a co-educational, independent school in Frizinghall, Bradford, West Yorkshire. Headmaster, Stephen Davidson is a member of the Headmasters' and Headmistresses' Conference . The school was founded in 1548 and granted its Charter by King Charles II in 1662...
and Trinity College
Trinity College, Cambridge
Trinity College is a constituent college of the University of Cambridge. Trinity has more members than any other college in Cambridge or Oxford, with around 700 undergraduates, 430 graduates, and over 170 Fellows...
, Cambridge University
University of Cambridge
The University of Cambridge is a public research university located in Cambridge, United Kingdom. It is the second-oldest university in both the United Kingdom and the English-speaking world , and the seventh-oldest globally...
, where he studied mathematics
Mathematics
Mathematics is the study of quantity, space, structure, and change. Mathematicians seek out patterns and formulate new conjectures. Mathematicians resolve the truth or falsity of conjectures by mathematical proofs, which are arguments sufficient to convince other mathematicians of their validity...
and astronomy
Astronomy
Astronomy is a natural science that deals with the study of celestial objects and phenomena that originate outside the atmosphere of Earth...
, being placed Second Wrangler in 1889. He was Astronomer Royal for Scotland
Astronomer Royal for Scotland
Astronomer Royal for Scotland was the title of the director of the Royal Observatory, Edinburgh until 1995. It has since been an honorary title.The following have served as Astronomers Royal for Scotland:* 1834–1844 Thomas Henderson...
from 1905 to 1910, and Astronomer Royal (and director of the Royal Greenwich Observatory) from 1910 to 1933. In 1928, he introduced a new free-pendulum clock in the Observatory. This wireless transmission meant that Greenwich Mean Time
Greenwich Mean Time
Greenwich Mean Time is a term originally referring to mean solar time at the Royal Observatory in Greenwich, London. It is arguably the same as Coordinated Universal Time and when this is viewed as a time zone the name Greenwich Mean Time is especially used by bodies connected with the United...
was more accurate. He also invented the "six pips
Greenwich Time Signal
The Greenwich Time Signal , popularly known as the pips, is a series of six short tones broadcast at one-second intervals by many BBC Radio stations to mark the precise start of each hour...
", in 1924.

Dyson was noted for his study of solar eclipse
Solar eclipse
As seen from the Earth, a solar eclipse occurs when the Moon passes between the Sun and the Earth, and the Moon fully or partially blocks the Sun as viewed from a location on Earth. This can happen only during a new moon, when the Sun and the Moon are in conjunction as seen from Earth. At least...
s and was an authority on the spectrum
Spectrum
A spectrum is a condition that is not limited to a specific set of values but can vary infinitely within a continuum. The word saw its first scientific use within the field of optics to describe the rainbow of colors in visible light when separated using a prism; it has since been applied by...
of the corona
Corona
A corona is a type of plasma "atmosphere" of the Sun or other celestial body, extending millions of kilometers into space, most easily seen during a total solar eclipse, but also observable in a coronagraph...
and on the chromosphere. He is credited with organizing expeditions to observe the 1919 solar eclipse at Brazil
Brazil
Brazil , officially the Federative Republic of Brazil , is the largest country in South America. It is the world's fifth largest country, both by geographical area and by population with over 192 million people...
and Principe
Príncipe
Príncipe is the northern and smaller of the two major islands of the country of São Tomé and Príncipe lying off the west coast of Africa. It has an area of 136 km² and a population of approximately 5,000. The island is a heavily eroded volcano over three million years old, surrounded by other...
, observations from which confirmed Einstein's theory of the effect of gravity on light
Light
Light or visible light is electromagnetic radiation that is visible to the human eye, and is responsible for the sense of sight. Visible light has wavelength in a range from about 380 nanometres to about 740 nm, with a frequency range of about 405 THz to 790 THz...
.

Dyson died while traveling from Australia to England in 1939, and was buried at sea 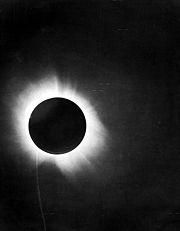 Frank Dyson and theoretical physicist Freeman Dyson
Freeman Dyson
Freeman John Dyson FRS is a British-born American theoretical physicist and mathematician, famous for his work in quantum field theory, solid-state physics, astronomy and nuclear engineering. Dyson is a member of the Board of Sponsors of the Bulletin of the Atomic Scientists...
are not related. However, the latter does credit Sir Frank with sparking his interest in astronomy; because they shared the same last name, Sir Frank's achievements were discussed by Freeman Dyson's family when he was a young boy. Inspired, Dyson's first attempt at writing was a 1931 piece of juvenilia
Juvenilia
Juvenilia is a term applied to literary, musical or artistic works produced by an author during his or her youth. The term often has a retrospective sense. For example, written juvenilia, if published at all, usually appear some time after the author has become well-known for later works.The term...
entitled "Sir Phillip Robert's Erolunar Collision" — Sir Philip being a thinly disguised version of Sir Frank.