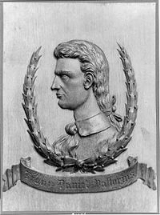 Born in Sommerhausen, Franconia
Franconia
Franconia is a region of Germany comprising the northern parts of the modern state of Bavaria, a small part of southern Thuringia, and a region in northeastern Baden-Württemberg called Tauberfranken...
, to a prosperous Lutheran
Lutheranism
Lutheranism is a major branch of Western Christianity that identifies with the theology of Martin Luther, a German reformer. Luther's efforts to reform the theology and practice of the church launched the Protestant Reformation...
family, he was trained as a lawyer
Lawyer
A lawyer, according to Black's Law Dictionary, is "a person learned in the law; as an attorney, counsel or solicitor; a person who is practicing law." Law is the system of rules of conduct established by the sovereign government of a society to correct wrongs, maintain the stability of political...
in some of the best German universities of his day, including the University of Altdorf
University of Altdorf
The University of Altdorf was a university in Altdorf bei Nürnberg, a small town outside Nuremberg. It was founded in the late 16th century, received university privileges in 1622 and was closed in 1809 by Maximilian I Joseph of Bavaria....
, the University of Strasbourg
University of Strasbourg
The University of Strasbourg in Strasbourg, Alsace, France, is the largest university in France, with about 43,000 students and over 4,000 researchers....
and the University of Jena
Friedrich Schiller University of Jena
Friedrich Schiller University of Jena , is a public research university located in Jena, Thuringia, Germany....
. He started his practice in Windsheim
Bad Windsheim
Bad Windsheim is a small historic city in Bavaria, Germany. It lies in the district Neustadt an der Aisch - Bad Windsheim, west of Nuremberg....
and Frankfurt-am-Main
Frankfurt
Frankfurt am Main , commonly known simply as Frankfurt, is the largest city in the German state of Hesse and the fifth-largest city in Germany, with a 2010 population of 688,249. The urban area had an estimated population of 2,300,000 in 2010...
. He was a close friend of the German Pietist
Pietism
Pietism was a movement within Lutheranism, lasting from the late 17th century to the mid-18th century and later. It proved to be very influential throughout Protestantism and Anabaptism, inspiring not only Anglican priest John Wesley to begin the Methodist movement, but also Alexander Mack to...
leader Philipp Jakob Spener
Philipp Jakob Spener
Philipp Jakob Spener was a German Christian theologian known as the "Father of Pietism."...
during the early development of Spener's movement in Frankfurt. From 1680 to 1682, he worked as a tutor accompanying a young nobleman during his Wanderjahr
Gap year
An expression or phrase that is associated with taking time out to travel in between life stages. It is also known as sabbatical, time off and time out that refers to a period of time in which students disengage from curricular education and undertake non curricular activities, such as travel or...
through Germany
Germany
Germany , officially the Federal Republic of Germany , is a federal parliamentary republic in Europe. The country consists of 16 states while the capital and largest city is Berlin. Germany covers an area of 357,021 km2 and has a largely temperate seasonal climate...
, England
England
England is a country that is part of the United Kingdom. It shares land borders with Scotland to the north and Wales to the west; the Irish Sea is to the north west, the Celtic Sea to the south west, with the North Sea to the east and the English Channel to the south separating it from continental...
, France
France
The French Republic , The French Republic , The French Republic , (commonly known as France , is a unitary semi-presidential republic in Western Europe with several overseas territories and islands located on other continents and in the Indian, Pacific, and Atlantic oceans. Metropolitan France...
, Switzerland
Switzerland
Switzerland name of one of the Swiss cantons. ; ; ; or ), in its full name the Swiss Confederation , is a federal republic consisting of 26 cantons, with Bern as the seat of the federal authorities. The country is situated in Western Europe,Or Central Europe depending on the definition....
and Holland.

In 1683, a group of Mennonite
Mennonite
The Mennonites are a group of Christian Anabaptist denominations named after the Frisian Menno Simons , who, through his writings, articulated and thereby formalized the teachings of earlier Swiss founders...
s, Pietists, and Quakers
Religious Society of Friends
The Religious Society of Friends, or Friends Church, is a Christian movement which stresses the doctrine of the priesthood of all believers. Members are known as Friends, or popularly as Quakers. It is made of independent organisations, which have split from one another due to doctrinal differences...
- like Abraham Isacks op den Graeff - in Frankfurt approached Pastorius about acting as their agent to purchase land in Pennsylvania
Pennsylvania
The Commonwealth of Pennsylvania is a U.S. state that is located in the Northeastern and Mid-Atlantic regions of the United States. The state borders Delaware and Maryland to the south, West Virginia to the southwest, Ohio to the west, New York and Ontario, Canada, to the north, and New Jersey to...
for a settlement. Pastorius took passage to Philadelphia.

In Philadelphia, he negotiated the purchase of 15,000 acres (61 km²) from William Penn
William Penn
William Penn was an English real estate entrepreneur, philosopher, and founder of the Province of Pennsylvania, the English North American colony and the future Commonwealth of Pennsylvania. He was an early champion of democracy and religious freedom, notable for his good relations and successful...
, the proprietor of the colony
Colony
In politics and history, a colony is a territory under the immediate political control of a state. For colonies in antiquity, city-states would often found their own colonies. Some colonies were historically countries, while others were territories without definite statehood from their inception....
, and laid out the settlement of Germantown, where he himself would live until his death.
As one of Germantown's leading citizens, Pastorius served in many public offices and wrote extensively on topics ranging from beekeeping
Beekeeping
Beekeeping is the maintenance of honey bee colonies, commonly in hives, by humans. A beekeeper keeps bees in order to collect honey and other products of the hive , to pollinate crops, or to produce bees for sale to other beekeepers...
to religion. He was also a skilled poet whose work appears in the New Oxford Book of Seventeenth-Century Verse (ISBN 0-19-214164-3).

Though raised as a Pietist Lutheran, he grew close to Quakerism. In 1688, he and three Germantown Quakers joined in signing a protest against slavery, the first one made in the English colonies
The 1688 Germantown Quaker Petition Against Slavery
The 1688 Germantown Quaker Petition Against Slavery was the first protest against African American slavery made by a religious body in the English colonies. It was drafted by Francis Daniel Pastorius and signed by him and three other Quakers living in Germantown, Pennsylvania on behalf of the...
.

Despite the Quaker sympathies of Pastorius, his name was appropriated in 1942 by the Abwehr
Abwehr
The Abwehr was a German military intelligence organisation from 1921 to 1944. The term Abwehr was used as a concession to Allied demands that Germany's post-World War I intelligence activities be for "defensive" purposes only...
of Nazi Germany
Nazi Germany
Nazi Germany , also known as the Third Reich , but officially called German Reich from 1933 to 1943 and Greater German Reich from 26 June 1943 onward, is the name commonly used to refer to the state of Germany from 1933 to 1945, when it was a totalitarian dictatorship ruled by...
for "Operation Pastorius
Operation Pastorius
Operation Pastorius was a failed plan for sabotage via a series of attacks by Nazi German agents inside the United States. The operation was staged in June 1942 and was to be directed against strategic U.S. economic targets...
," a failed sabotage
Sabotage
Sabotage is a deliberate action aimed at weakening another entity through subversion, obstruction, disruption, or destruction. In a workplace setting, sabotage is the conscious withdrawal of efficiency generally directed at causing some change in workplace conditions. One who engages in sabotage is...
attack on the United States
United States
The United States of America is a federal constitutional republic comprising fifty states and a federal district...
in World War II
World War II
World War II, or the Second World War , was a global conflict lasting from 1939 to 1945, involving most of the world's nations—including all of the great powers—eventually forming two opposing military alliances: the Allies and the Axis...
that included a target in Philadelphia.