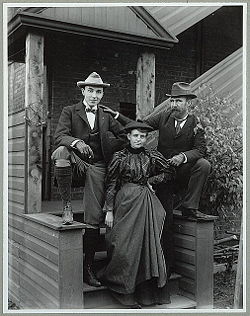 Frances "Fannie" Benjamin Johnston (15 January 1864 – 16 May 1952) was one of the earliest American
United States
The United States of America is a federal constitutional republic comprising fifty states and a federal district...
female photographers and photojournalists.

The only surviving child of wealthy and well connected parents, she was born in Grafton, West Virginia
Grafton, West Virginia
Grafton is a city in, and county seat of, Taylor County, West Virginia, USA. The population was 5,489 at the 2000 census. The only two national cemeteries in West Virginia are located in Grafton. Mother's Day was founded in Grafton on May 10, 1908; the city is the home to the International Mother's...
, raised in Washington D.C., and studied at the Académie Julian
Académie Julian
The Académie Julian was an art school in Paris, France.Rodolphe Julian established the Académie Julian in 1868 at the Passage des Panoramas, as a private studio school for art students. The Académie Julian not only prepared students to the exams at the prestigious École des Beaux-Arts, but offered...
in Paris
Paris
Paris is the capital and largest city in France, situated on the river Seine, in northern France, at the heart of the Île-de-France region...
and the Washington Students League. An independent and strong willed young woman, she wrote articles for periodicals before finding her creative outlet through photography after she was given her first camera by George Eastman
George Eastman
George Eastman was an American innovator and entrepreneur who founded the Eastman Kodak Company and invented roll film, helping to bring photography to the mainstream...
, a close friend of the family, and inventor of the new, lighter, Eastman Kodak
Eastman Kodak
Eastman Kodak Company is a multinational imaging and photographic equipment, materials and services company headquarted in Rochester, New York, United States. It was founded by George Eastman in 1892....
cameras. She received training in photography and dark room techniques from Thomas Smillie, director of photography at the Smithsonian.

She took portraits of friends, family and local figures before working as a freelance photographer and touring Europe in the 1890s, using her connection to Smillie to visit prominent photographers and gather items for the museum's collections. She gained further practical experience in her craft by working for the newly formed Eastman Kodak
Eastman Kodak
Eastman Kodak Company is a multinational imaging and photographic equipment, materials and services company headquarted in Rochester, New York, United States. It was founded by George Eastman in 1892....
company in Washington D.C. forwarding film for development and advising customers when cameras needed repairs. She opened her own photographic studio in Washington D.C. in 1895, taking portraits of many famous contemporaries including Susan B. Anthony
Susan B. Anthony
Susan Brownell Anthony was a prominent American civil rights leader who played a pivotal role in the 19th century women's rights movement to introduce women's suffrage into the United States. She was co-founder of the first Women's Temperance Movement with Elizabeth Cady Stanton as President...
, Mark Twain
Mark Twain
Samuel Langhorne Clemens , better known by his pen name Mark Twain, was an American author and humorist...
and Booker T. Washington
Booker T. Washington
Booker Taliaferro Washington was an American educator, author, orator, and political leader. He was the dominant figure in the African-American community in the United States from 1890 to 1915...
. Well connected among elite society, she was commissioned by magazines to do 'celebrity' portraits and was dubbed the "Photographer to the American court." She photographed Admiral Dewey on the deck of the USS Olympia
USS Olympia (C-6)
USS Olympia is a protected cruiser which saw service in the United States Navy from her commissioning in 1895 until 1922. This vessel became famous as the flagship of Commodore George Dewey at the Battle of Manila Bay during the Spanish-American War in 1898. The ship was decommissioned after...
, the Roosevelt children playing with their pet pony at the White House
White House
The White House is the official residence and principal workplace of the president of the United States. Located at 1600 Pennsylvania Avenue NW in Washington, D.C., the house was designed by Irish-born James Hoban, and built between 1792 and 1800 of white-painted Aquia sandstone in the Neoclassical...
and the gardens of Edith Wharton
Edith Wharton
Edith Wharton , was a Pulitzer Prize-winning American novelist, short story writer, and designer.- Early life and marriage:...
's famous villa near Paris.

Johnston also photographed the famous American heiress and literary salon socialite Natalie Barney in Paris but perhaps her most famous work, shown opposite, is her self portrait of the liberated 'New Woman
New Woman
The New Woman was a feminist ideal that emerged in the late 19th century. The New Woman pushed the limits set by male-dominated society, especially as modeled in the plays of Norwegian Henrik Ibsen . "The New Woman sprang fully armed from Ibsen's brain," according to a joke by Max Beerbohm...
', petticoats showing and beer stein in hand. Johnston was a constant advocate for the role of women in the burgeoning art of photography. The Ladies Home Journal published Johnston's article "What a Woman Can Do With a Camera" in 1897 and she co-curated (with Zaida Ben-Yusuf
Zaida Ben-Yusuf
Zaida Ben-Yusuf was a New York-based portrait photographer noted for her artistic portraits of wealthy, fashionable, and famous Americans of the turn of the 19th-20th century. She was born in London to a German mother and an Algerian father, but became a naturalised American citizen later in life...
) an exhibition of photographs by twenty-eight women photographers at the 1900 Exposition Universelle
Exposition Universelle (1900)
The Exposition Universelle of 1900 was a world's fair held in Paris, France, from April 15 to November 12, 1900, to celebrate the achievements of the past century and to accelerate development into the next...
, which afterwards travelled to Saint Petersburg
Saint Petersburg
Saint Petersburg is a city and a federal subject of Russia located on the Neva River at the head of the Gulf of Finland on the Baltic Sea...
, Moscow
Moscow
Moscow is the capital, the most populous city, and the most populous federal subject of Russia. The city is a major political, economic, cultural, scientific, religious, financial, educational, and transportation centre of Russia and the continent...
, and Washington, DC. She traveled widely in her thirties, taking a wide range of documentary and artistic photographs of coal miners, iron workers, women in New England
New England
New England is a region in the northeastern corner of the United States consisting of the six states of Maine, New Hampshire, Vermont, Massachusetts, Rhode Island, and Connecticut...
's mills and sailors being tattooed on board ship as well as her society commissions.

In 1899, she gained further notability when she was commissioned by Hollis Burke Frissell to photograph the buildings and students of the Hampton Normal and Agricultural Institute in Hampton, Virginia
Hampton, Virginia
Hampton is an independent city that is not part of any county in Southeast Virginia. Its population is 137,436. As one of the seven major cities that compose the Hampton Roads metropolitan area, it is on the southeastern end of the Virginia Peninsula. Located on the Hampton Roads Beltway, it hosts...
in order to show its success. This series, documenting the ordinary life of the school, remains as some of her most telling work. It was displayed at the Exposé nègre of the Paris Exposition Universelle
Exposition Universelle (1900)
The Exposition Universelle of 1900 was a world's fair held in Paris, France, from April 15 to November 12, 1900, to celebrate the achievements of the past century and to accelerate development into the next...
in 1900.

In the 1920s she became increasingly interested in photographing architecture, motivated by a desire to document buildings and gardens which were falling into disrepair or about to be redeveloped and lost. Her photographs remain an important resource for modern architects, historians and conservationists. She exhibited a series of 247 photographs of Fredericksburg, Virginia
Fredericksburg, Virginia
Fredericksburg is an independent city in the Commonwealth of Virginia located south of Washington, D.C., and north of Richmond. As of the 2010 census, the city had a population of 24,286...
, from the decaying mansions of the rich to the shacks of the poor, in 1928. The exhibit was titled "Pictorial Survey--Old Fredericksburg, Virginia--Old Falmouth and Nearby Places" and described as "A Series of Photographic Studies of the Architecture of the Region Dating by Tradition from Colonial Times to Circa 1830" as "An Historical Record and to Preserve Something of the Atmosphere of An Old Virginia Town."

Publicity from the display prompted the University of Virginia
University of Virginia
The University of Virginia is a public research university located in Charlottesville, Virginia, United States, founded by Thomas Jefferson...
to hire her to document its buildings and the state of North Carolina
North Carolina
North Carolina is a state located in the southeastern United States. The state borders South Carolina and Georgia to the south, Tennessee to the west and Virginia to the north. North Carolina contains 100 counties. Its capital is Raleigh, and its largest city is Charlotte...
to record its architectural history. Louisiana
Louisiana
Louisiana is a state located in the southern region of the United States of America. Its capital is Baton Rouge and largest city is New Orleans. Louisiana is the only state in the U.S. with political subdivisions termed parishes, which are local governments equivalent to counties...
hired Johnston to document its huge inventory of rapidly deteriorating plantations and she was given a grant in 1933 by the Carnegie Corporation of New York to document Virginia's early architecture. This led to a series of grants and photographs of eight other southern states, all of which were given to the Library of Congress for public use. Johnston was named an honorary member of the American Institute of Architects
American Institute of Architects
The American Institute of Architects is a professional organization for architects in the United States. Headquartered in Washington, D.C., the AIA offers education, government advocacy, community redevelopment, and public outreach to support the architecture profession and improve its public image...
for her work in preserving old and endangered buildings and her collections have been purchased by institutions such as the Metropolitan Museum of Art
Metropolitan Museum of Art
The Metropolitan Museum of Art is a renowned art museum in New York City. Its permanent collection contains more than two million works, divided into nineteen curatorial departments. The main building, located on the eastern edge of Central Park along Manhattan's Museum Mile, is one of the...
, the Virginia Museum of Fine Arts
Virginia Museum of Fine Arts
The Virginia Museum of Fine arts, or VMFA, is an art museum in Richmond, Virginia, in the United States, which opened in 1936.The museum is owned and operated by the Commonwealth of Virginia, while private donations, endowments, and funds are used for the support of specific programs and all...
and the Baltimore Museum of Art
Baltimore Museum of Art
The Baltimore Museum of Art in Baltimore, Maryland, United States, was founded in 1914. Built in the Roman Temple style, the Museum is home to an internationally renowned collection of 19th-century, modern, and contemporary art. Founded in 1914 with a single painting, the BMA today has 90,000 works...
. Although her relentless traveling was curtailed by petrol rationing in the Second World War the tireless Johnston continued to photograph until her death in New Orleans at age eighty-eight.