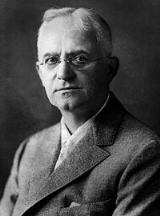 Overview
George Eastman was an American innovator and entrepreneur who founded the Eastman Kodak
Eastman Kodak
Eastman Kodak Company is a multinational imaging and photographic equipment, materials and services company headquarted in Rochester, New York, United States. It was founded by George Eastman in 1892....
Company and invented roll film
Roll film
Rollfilm or roll film is any type of spool-wound photographic film protected from white light exposure by a paper backing, as opposed to film which is protected from exposure and wound forward in a cartridge. Confusingly, roll film was originally often referred to as "cartridge" film because of its...
, helping to bring photography
Photography
Photography is the art, science and practice of creating durable images by recording light or other electromagnetic radiation, either electronically by means of an image sensor or chemically by means of a light-sensitive material such as photographic film...
to the mainstream. Roll film was also the basis for the invention of motion picture film
Film stock
Film stock is photographic film on which filmmaking of motion pictures are shot and reproduced. The equivalent in television production is video tape.-1889–1899:...
in 1888 by the world's first filmmakers Eadward Muybridge and Louis Le Prince
Louis Le Prince
Louis Aimé Augustin Le Prince was an inventor who is considered by many film historians as the true father of motion pictures, who shot the first moving pictures on paper film using a single lens camera....
, and a few years later by his followers Léon Bouly
Léon Bouly
Léon Guillaume Bouly was a French inventor who created the word cinematograph.-Cinematograph:After devising chronophotography devices, Bouly applied a patent on a reversible device of photography and optics for the analysis and synthesis of motions, calling it the Cynématographe Léon Bouly on...
, Thomas Edison
Thomas Edison
Thomas Alva Edison was an American inventor and businessman. He developed many devices that greatly influenced life around the world, including the phonograph, the motion picture camera, and a long-lasting, practical electric light bulb. In addition, he created the world’s first industrial...
, the Lumière Brothers and Georges Méliès
Georges Méliès
Georges Méliès , full name Marie-Georges-Jean Méliès, was a French filmmaker famous for leading many technical and narrative developments in the earliest cinema. He was very innovative in the use of special effects...
.