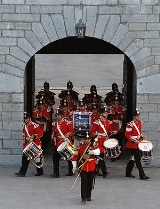 Encyclopedia
The Fort Henry Guard is a military reenactment
Historical reenactment
Historical reenactment is an educational activity in which participants attempt torecreate some aspects of a historical event or period. This may be as narrow as a specific moment from a battle, such as the reenactment of Pickett's Charge at the Great Reunion of 1913, or as broad as an entire...
organization based at Fort Henry
Fort Henry, Ontario
Fort Henry is located in Kingston, Ontario, Canada on Point Henry, a strategic point located near the mouth of the Cataraqui River where it flows into the St. Lawrence River, at the upper end of the Thousand Islands...
, a national historic site in Kingston
Kingston, Ontario
Kingston, Ontario is a Canadian city located in Eastern Ontario where the St. Lawrence River flows out of Lake Ontario. Originally a First Nations settlement called "Katarowki," , growing European exploration in the 17th Century made it an important trading post...
, Ontario
Ontario
Ontario is a province of Canada, located in east-central Canada. It is Canada's most populous province and second largest in total area. It is home to the nation's most populous city, Toronto, and the nation's capital, Ottawa....
, Canada
Canada
Canada is a North American country consisting of ten provinces and three territories. Located in the northern part of the continent, it extends from the Atlantic Ocean in the east to the Pacific Ocean in the west, and northward into the Arctic Ocean...
. It has recreated the British military tradition of a bygone era since its founding in 1938. The Guard seeks to interpret
Heritage interpretation
Heritage interpretation is the communication of information about, or the explanation of, the nature, origin, and purpose of historical, natural, or cultural resources, objects, sites and phenomena using personal or non-personal methods....
in an entertaining and animated manner, a snapshot of life in the British Army
British Army
The British Army is the land warfare branch of Her Majesty's Armed Forces in the United Kingdom. It came into being with the unification of the Kingdom of England and Scotland into the Kingdom of Great Britain in 1707. The new British Army incorporated Regiments that had already existed in England...
of Queen Victoria, when Canada was part of the British Empire
British Empire
The British Empire comprised the dominions, colonies, protectorates, mandates and other territories ruled or administered by the United Kingdom. It originated with the overseas colonies and trading posts established by England in the late 16th and early 17th centuries. At its height, it was the...
. Guard members dress in the standard line infantry
Line infantry
Line infantry is a type of infantry which composed the basis of European land armies from the middle of the 17th century to the middle of the 19th century....
uniforms of a British regiment and the standard gunner's uniforms of the Royal Artillery
Royal Artillery
The Royal Regiment of Artillery, commonly referred to as the Royal Artillery , is the artillery arm of the British Army. Despite its name, it comprises a number of regiments.-History:...
in the year 1867, but the Guard does not represent any specific infantry regiment that garrisoned the fort.

The Guard Colours
Colours, standards and guidons
In military organizations, the practice of carrying colours, standards or Guidons, both to act as a rallying point for troops and to mark the location of the commander, is thought to have originated in Ancient Egypt some 5,000 years ago...
are based on the regulations in effect in 1867 and were presented to the Fort Henry Guard in 1955. They have been carried on parade ever since. The Regimental Colours of the Fort Henry Guard, instead of bearing battle honours, commemorate the 33 British Regiments and 6 Canadian Regiments who have garrisoned Fort Henry.

Although the officers and soldiers of today's Guard superficially represent the regular garrisons that have known the stone walls of Fort Henry, the connection is seen in the unit's pride, honour, tradition, and esprit de corps. The Guard has its own history and traditions.

The Guard's most senior non-administrative position is that of the Guard Captain who oversees all aspects of training and performance throughout the summer. His second in command is the Artillery Lieutenant
Lieutenant
A lieutenant is a junior commissioned officer in many nations' armed forces. Typically, the rank of lieutenant in naval usage, while still a junior officer rank, is senior to the army rank...
who is in charge of the fort's artillery. There are also two Ensign
Ensign (rank)
Ensign is a junior rank of a commissioned officer in the armed forces of some countries, normally in the infantry or navy. As the junior officer in an infantry regiment was traditionally the carrier of the ensign flag, the rank itself acquired the name....
s whose main duties are to carry the Regimental Colours when parading and to assist in the running of Fort Henry as officer of the day. The Guard is composed of two sub-units: the Drill Squad, a precision drill team led by the Sergeant Major
Sergeant Major
Sergeants major is a senior non-commissioned rank or appointment in many militaries around the world. In Commonwealth countries, Sergeants Major are usually appointments held by senior non-commissioned officers or warrant officers...
and Colour Sergeant
Colour Sergeant
Colour sergeant or colour serjeant is a non-commissioned title in the Royal Marines and infantry regiments of the British Army, ranking above sergeant and below warrant officer class 2....
; and a precision military marching unit known as the Drums, who play snare and bass drums, fifes and bugles led by the Drum Major
Drum Major
A drum major is the leader of a marching band, drum and bugle corps, or pipe band, usually positioned at the head of the band or corps. The drum major, who is often dressed in more ornate clothing than the rest of the band or corps, is responsible for providing commands to the ensemble regarding...
and a Drum Sergeant who acts as his or her second-in-command (2 i/c). Other positions within the Guard can include a Brigade Sergeant Major, who can act as the NCO in charge of the artillery in the absence of a lieutenant, sergeants to assist in artillery and/or interpretation duties, and several junior non-commissioned officers within the two main sub-units who are involved with the training and immediate supervision of the privates. Promotion within the Guard is based on merit and seniority - every Guard Captain in the Fort Henry Guard started as a private. There are also domestic
Domestic worker
A domestic worker is a man, woman or child who works within the employer's household. Domestic workers perform a variety of household services for an individual or a family, from providing care for children and elderly dependents to cleaning and household maintenance, known as housekeeping...
interpreters and a headquarters unit; this is usually composed of pipers, assault Pioneer
Assault Pioneer
An Assault Pioneer is an infantry soldier who is responsible for:* The construction of tools for infantry soldiers to cross natural and man-made obstacles as well as breaching of enemy fortifications;...
s, and the Goat Major, who is in charge of David IX, a White Saanen Goat
Saanen goat
Saanen goats are a white or cream-colored breed of goat, named for the Saanen valley in Switzerland. Saanens are the largest of the goat dairy breeds. Does typically weigh 150 lb or more, with bucks weighing over 200 lb . The Saanen breed also produces the most milk on average, and tends to have a...
who serves as the Guard's mascot. All Guard are trained to man the Fort's guns in the uniforms of the Royal Artillery.

The Guard is noted for its dedication to historical accuracy and as such the uniforms, while not original, are extremely accurate reproductions. In addition, the Snider-Enfield
Snider-Enfield
The British .577 Snider-Enfield was a type of breech loading rifle. The firearm action was invented by the American Jacob Snider, and the Snider-Enfield was one of the most widely used of the Snider varieties. It was adopted by British Army as a conversion system for its ubiquitous Pattern 1853...
rifles and carbines used by the Guard are all original to the 1860s. The Guard also fires 24-pounder smooth bore
Smoothbore
A smoothbore weapon is one which has a barrel without rifling. Smoothbores range from handheld firearms to powerful tank guns and large artillery mortars.-History of firearms and rifling:...
muzzle loading guns, two rifled breech loader
Rifled breech loader
A rifled breech loader is an artillery piece which, unlike the smooth-bore cannon and rifled muzzle loader which preceded it, has rifling in the barrel and is loaded from the breech at the rear of the gun....
6- and 12-pounder Armstrong gun
Armstrong Gun
The term Armstrong Gun was primarily used to describe the unique design of the rifled breech-loading field and heavy guns designed by Sir William Armstrong and manufactured in England from 1855 by the Elswick Ordnance Company and the Royal Arsenal at Woolwich...
s, 32 pounder carronade
Carronade
The carronade was a short smoothbore, cast iron cannon, developed for the Royal Navy by the Carron Company, an ironworks in Falkirk, Scotland, UK. It was used from the 1770s to the 1850s. Its main function was to serve as a powerful, short-range anti-ship and anti-crew weapon...
s, and mortar
Mortar (weapon)
A mortar is an indirect fire weapon that fires explosive projectiles known as bombs at low velocities, short ranges, and high-arcing ballistic trajectories. It is typically muzzle-loading and has a barrel length less than 15 times its caliber....
s.
The source of this article is wikipedia, the free encyclopedia.  The text of this article is licensed under the GFDL.