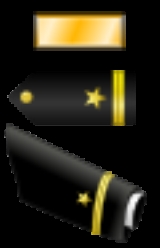 Encyclopedia
Ensign is a junior rank of a commissioned officer in the armed forces of some countries, normally in the infantry or navy. As the junior officer in an infantry regiment was traditionally the carrier of the ensign flag
Ensign
An ensign is a national flag when used at sea, in vexillology, or a distinguishing token, emblem, or badge, such as a symbol of office in heraldry...
, the rank itself acquired the name.

"Ensign" is enseigne in French, Fähnrich
Fähnrich
Fähnrich is a German and Austrian military rank in armed forces which translates as "Ensign" in English. The rank also exists in a few other European military organizations, often with historical ties to the German system. Examples are Sweden, Norway and Finland . The French Army has a similar...
in German, and chorąży
Chorąży
Chorąży or Khorunzhyi is a military rank in Poland, Ukraine and some neighboring countries. A chorąży was once a knight who bore a standard — the emblem of an armed troop, a province , a land , a duchy, or the kingdom...
in Polish, each of which derives from a term for a flag. The Spanish alférez and Portuguese alferes is a junior officer rank below lieutenant associated with carrying the flag, and so is often translated as "ensign". Unlike the rank in other languages, its etymology has nothing to do with flags.

The NATO rank code is OF-1 (junior)

In France of the Ancien Régime, like in other countries, the ensign (enseigne) was the banner of an infantry regiment. As in other countries, the name began to be used for the officers who carried the ensign. It was renamed sub-lieutenant
Sub-Lieutenant
Sub-lieutenant is a military rank. It is normally a junior officer rank.In many navies, a sub-lieutenant is a naval commissioned or subordinate officer, ranking below a lieutenant. In the Royal Navy the rank of sub-lieutenant is equivalent to the rank of lieutenant in the British Army and of...
(sous-lieutenant) in the end of the 18th century.
The Navy used a rank of ship-of-the-line ensign (enseigne de vaisseau), which was the first officer rank. It was briefly renamed ship-of-the-line sub-lieutenant (sous-lieutenant de vaisseau) in the end of the 18th century, but its original name was soon restored.

French-speaking Canadian Naval officers
Officer (armed forces)
An officer is a member of an armed force or uniformed service who holds a position of authority. Commissioned officers derive authority directly from a sovereign power and, as such, hold a commission charging them with the duties and responsibilities of a specific office or position...
also use the terms of enseigne de vaisseau de deuxième classe and de première classe as the French term for acting sub-lieutenant and sub-lieutenant
Sub-Lieutenant
Sub-lieutenant is a military rank. It is normally a junior officer rank.In many navies, a sub-lieutenant is a naval commissioned or subordinate officer, ranking below a lieutenant. In the Royal Navy the rank of sub-lieutenant is equivalent to the rank of lieutenant in the British Army and of...
respectively. However, French-Canadian sub-lieutenants use the short form of enseigne instead of lieutenant.

Ensign is a German and Austrian officer cadet
Officer Cadet
Officer cadet is a rank held by military and merchant navy cadets during their training to become commissioned officers and merchant navy officers, respectively. The term officer trainee is used interchangeably in some countries...
rank. A German ensign is a non-commissioned officer
Non-commissioned officer
A non-commissioned officer , called a sub-officer in some countries, is a military officer who has not been given a commission...
promoted from the rank of Fahnenjunker. A Fähnrich rank is equivalent to a Feldwebel
Feldwebel
Feldwebel is a German military rank which has existed since at least the 18th century with usage as a title dating to the Middle Ages. The word Feldwebel is usually translated as sergeant being rated OR-6 in the NATO rank comparison scale, equivalent to the British Army Sergeant and the US Army...
(Staff Sergeant), but with additional responsibilities. If successful, he may be promoted to Oberfähnrich (equivalent to Oberfeldwebel, or First Sergeant), before being made an officer.

The Royal New Zealand Navy
Royal New Zealand Navy
The Royal New Zealand Navy is the maritime arm of the New Zealand Defence Force...
, unlike the Royal Navy
Royal Navy
The Royal Navy is the naval warfare service branch of the British Armed Forces. Founded in the 16th century, it is the oldest service branch and is known as the Senior Service...
—whose uniforms, insignia, and traditions it copies—created the ensign grade to equal the lowest commissioned RNZAF
Royal New Zealand Air Force
The Royal New Zealand Air Force is the air arm of the New Zealand Defence Force...
grade of pilot officer
Pilot Officer
Pilot officer is the lowest commissioned rank in the Royal Air Force and the air forces of many other Commonwealth countries. It ranks immediately below flying officer...
and the New Zealand Army grade of second lieutenant
Second Lieutenant
Second lieutenant is a junior commissioned officer military rank in many armed forces.- United Kingdom and Commonwealth :The rank second lieutenant was introduced throughout the British Army in 1871 to replace the rank of ensign , although it had long been used in the Royal Artillery, Royal...
. It ranks above the grade of midshipman
Midshipman
A midshipman is an officer cadet, or a commissioned officer of the lowest rank, in the Royal Navy, United States Navy, and many Commonwealth navies. Commonwealth countries which use the rank include Australia, New Zealand, South Africa, India, Pakistan, Singapore, Sri Lanka and Kenya...
. Like the grade of pilot officer, it uses a single thin strip of braid.

The rank is obtained after attending befalsskolen for one year, from which the candidate emerges as a sergeant, and serving as a sergeant for one additional year. The rank is known to have been temporarily given to soldiers with rank equivalent of non-commissioned officers, showing skill-set's and performance beyond their rank, in contract based operative service (UN, NATO). This is highly uncommon and the rank is reverted after the contract period ends.

A fenrik serves as a NATO (OF-1) second lieutenant, but the function of the rank differs drastically from other armies. Although it is an officer rank, it strongly resembles an NCO-rank in practice. Fenriks are usually former experienced sergeants without officer education, and usually fill such roles as squad leaders and platoon sergeants. This is due to the lack of an NCO-corps in the Norwegian Army.

The corresponding ranks for the Royal Norwegian Air Force were vingsersjant and stabssersjant.

The rank insignia is worn on the sleeves (navy dress uniform only), on the shoulders of service uniforms or - more recently - on the chest. The chest placement is of newer date, and was introduced with the M-2000 uniform, which is worn by both noncommissioned ranks and officers in all branches of the Norwegian Defence.

The Polish Army equivalent of "ensign" is "chorąży
Chorąży
Chorąży or Khorunzhyi is a military rank in Poland, Ukraine and some neighboring countries. A chorąży was once a knight who bore a standard — the emblem of an armed troop, a province , a land , a duchy, or the kingdom...
" (the Polish
Polish language
Polish is a language of the Lechitic subgroup of West Slavic languages, used throughout Poland and by Polish minorities in other countries...
for "ensign
Ensign
An ensign is a national flag when used at sea, in vexillology, or a distinguishing token, emblem, or badge, such as a symbol of office in heraldry...
" or "flag" being "chorągiew"). In Poland "ensign" is not an officer rank. They have following, different ranks of ensign:

Until 1871, when it was replaced by second lieutenant
Second Lieutenant
Second lieutenant is a junior commissioned officer military rank in many armed forces.- United Kingdom and Commonwealth :The rank second lieutenant was introduced throughout the British Army in 1871 to replace the rank of ensign , although it had long been used in the Royal Artillery, Royal...
, ensign was the lowest rank of commissioned officer in infantry
Infantry
Infantrymen are soldiers who are specifically trained for the role of fighting on foot to engage the enemy face to face and have historically borne the brunt of the casualties of combat in wars. As the oldest branch of combat arms, they are the backbone of armies...
regiments of the British Army (except fusilier
Fusilier
Fusilier was originally the name of a soldier armed with a light flintlock musket called the fusil. The word was first used around 1680, and has later developed into a regimental designation.-History:...
and rifle regiments, which always used second lieutenant). It was the duty of officers of this rank to carry the colours of the regiment. In the 16th century "ensign" was corrupted into "ancient," and was used in the two senses of a banner and the bearer of the banner. Today, the term "ensign" is still used by the Foot Guards
Foot Guards
-British Army:The Foot Guards are the Regular Infantry regiments of the Household Division of the British Army. There have been six regiments of foot guards, five of which still exist. The Royal Guards Reserve Regiment was a reserve formation of the Household Brigade in existence from 1900-1901...
regiments, for instance during the ceremony of trooping the colour
Trooping the Colour
Trooping the Colour is a ceremony performed by regiments of the British and the Commonwealth armies. It has been a tradition of British infantry regiments since the 17th century, although the roots go back much earlier. On battlefields, a regiment's colours, or flags, were used as rallying points...
. The equivalent cavalry rank was cornet
Cornet (military rank)
Cornet was originally the third and lowest grade of commissioned officer in a British cavalry troop, after captain and lieutenant. A cornet is a new and junior officer.- Traditional duties :The cornet carried the troop standard, also known as a "cornet"....
, also being derived from the name of a banner.

Depending upon the warfare community, an ensign may go directly to a ship after commissioning to serve as a division officer or receive one to two years of specialty training prior to reporting to an operational unit. Ensigns who become division officers are responsible for leading a group of petty officer
Petty Officer
A petty officer is a non-commissioned officer in many navies and is given the NATO rank denotion OR-6. They are equal in rank to sergeant, British Army and Royal Air Force. A Petty Officer is superior in rank to Leading Rate and subordinate to Chief Petty Officer, in the case of the British Armed...
s and enlisted personnel in one of the ship's divisions (for example, engineering or navigation) while at the same time receiving on-the-job training in leadership, naval systems, programs and policies from enlisted sailors
Enlisted rank
An enlisted rank is, in most Militaries, any rank below a commissioned officer or warrant officer. The term can also be inclusive of non-commissioned officers...
and other officers.

Navy and coast guard ensigns wear collar insignia of a single gold bar and because of this share the nickname "butterbars" with Army, Air Force, and Marine Second Lieutenants, who wear similar insignia.

Within the US Public Health Service, those wearing the rank of ensign are part of a commissioned officer student training and extern program (COSTEP), either junior, for those with more than a year remaining of education in a commissionable degree (JRCOSTEP), or senior, for those within one year of graduating with a commissionable degree (SRCOSTEP). Some commissioned officers may hold a permanent rank of ensign based on their experience and education, but hold a temporary rank of lieutenant, junior grade.