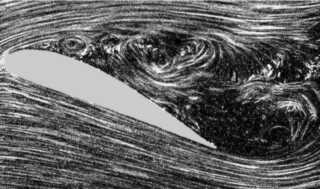 All solid objects travelling through a fluid
Fluid
In physics, a fluid is a substance that continually deforms under an applied shear stress. Fluids are a subset of the phases of matter and include liquids, gases, plasmas and, to some extent, plastic solids....
(or alternatively a stationary object exposed to a moving fluid) acquire a boundary layer
Boundary layer
In physics and fluid mechanics, a boundary layer is that layer of fluid in the immediate vicinity of a bounding surface where effects of viscosity of the fluid are considered in detail. In the Earth's atmosphere, the planetary boundary layer is the air layer near the ground affected by diurnal...
of fluid around them where viscous forces
Viscosity
Viscosity is a measure of the resistance of a fluid which is being deformed by either shear or tensile stress. In everyday terms , viscosity is "thickness" or "internal friction". Thus, water is "thin", having a lower viscosity, while honey is "thick", having a higher viscosity...
occur in the layer of fluid close to the solid surface. Boundary layers can be either laminar
Laminar flow
Laminar flow, sometimes known as streamline flow, occurs when a fluid flows in parallel layers, with no disruption between the layers. At low velocities the fluid tends to flow without lateral mixing, and adjacent layers slide past one another like playing cards. There are no cross currents...
or turbulent. A reasonable assessment of whether the boundary layer will be laminar or turbulent can be made by calculating the Reynolds number of the local flow conditions.

Flow separation occurs when the boundary layer travels far enough against an adverse pressure gradient that the speed of the boundary layer relative to the object falls almost to zero. The fluid flow becomes detached from the surface of the object, and instead takes the forms of eddies
Eddy (fluid dynamics)
In fluid dynamics, an eddy is the swirling of a fluid and the reverse current created when the fluid flows past an obstacle. The moving fluid creates a space devoid of downstream-flowing fluid on the downstream side of the object...
and vortices
Vortex
A vortex is a spinning, often turbulent,flow of fluid. Any spiral motion with closed streamlines is vortex flow. The motion of the fluid swirling rapidly around a center is called a vortex...
. In aerodynamics
Aerodynamics
Aerodynamics is a branch of dynamics concerned with studying the motion of air, particularly when it interacts with a moving object. Aerodynamics is a subfield of fluid dynamics and gas dynamics, with much theory shared between them. Aerodynamics is often used synonymously with gas dynamics, with...
, flow separation can often result in increased drag
Drag (physics)
In fluid dynamics, drag refers to forces which act on a solid object in the direction of the relative fluid flow velocity...
, particularly pressure drag which is caused by the pressure
Pressure
Pressure is the force per unit area applied in a direction perpendicular to the surface of an object. Gauge pressure is the pressure relative to the local atmospheric or ambient pressure.- Definition :...
differential between the front and rear surfaces of the object as it travels through the fluid. For this reason much effort and research has gone into the design of aerodynamic and hydrodynamic surfaces which delay flow separation and keep the local flow attached for as long as possible. Examples of this include the fur on a tennis ball, dimples on a golf ball, turbulator
Turbulator
A turbulator is a device that turns a laminar flow into a turbulent flow. Turbulent flow can be desired on parts of the surface of an aircraft wing or in industrial applications such as heat exchangers and the mixing of fluids.-Airfoil turbulators:...
s on a glider, which induce an early transition to turbulent flow regime; vortex generator
Vortex generator
A vortex generator is an aerodynamic surface, consisting of a small vane or bump that creates a vortex. Vortex generators can be found on many devices, but the term is most often used in aircraft design....
s on light aircraft, for controlling the separation pattern; and leading edge extension
Leading edge extension
A leading edge extension is a small extension to an aircraft wing surface, forward of the leading edge. Different kinds of extensions have been used for different reasons.-Leading edge slats:...
s for high angles of attack
Angle of attack
Angle of attack is a term used in fluid dynamics to describe the angle between a reference line on a lifting body and the vector representing the relative motion between the lifting body and the fluid through which it is moving...
on the wings of aircraft such as the F/A-18 Hornet
F/A-18 Hornet
The McDonnell Douglas F/A-18 Hornet is a supersonic, all-weather carrier-capable multirole fighter jet, designed to dogfight and attack ground targets . Designed by McDonnell Douglas and Northrop, the F/A-18 was derived from the latter's YF-17 in the 1970s for use by the United States Navy and...
.

Boundary layer separation occurs when the portion of the boundary layer closest to the wall or leading edge reverses in flow direction. As a result, the overall boundary layer initially thickens suddenly and is then forced off the surface by the reversed flow at its bottom.

are streamwise and normal coordinates.
An adverse pressure gradient is when

, which then can be seen to cause the velocity

and possibly go to zero if the adverse pressure gradient is strong enough.

along the surface, which in turn is directly related to the pressure and its gradient by the differential form of the Bernoulli relation,
which is the same as the momentum equation for the outer inviscid flow.

But the general magnitudes of

required for separation are much greater for turbulent
Turbulence
In fluid dynamics, turbulence or turbulent flow is a flow regime characterized by chaotic and stochastic property changes. This includes low momentum diffusion, high momentum convection, and rapid variation of pressure and velocity in space and time...
than for laminar flow, the former being able to tolerate nearly an order of magnitude stronger flow deceleration. A secondary influence is the Reynolds number. For a given adverse

Boundary layer separation can occur for internal flows. It can result from such causes such as a rapidly expanding duct of pipe. Separation occurs due to an adverse pressure gradient encountered as the flow expands, causing an extended region of separated flow. The part of the flow that separates the recirculating flow and the flow through the central region of the duct is called the dividing streamline. The point where the dividing streamline attaches to the wall again is called the reattachment point. As the flow goes farther downstream it eventually achieves an equilibrium state and has no reverse flow.

When the boundary layer separates, its displacement thickness increases sharply, which modifies the outside potential flow
Potential flow
In fluid dynamics, potential flow describes the velocity field as the gradient of a scalar function: the velocity potential. As a result, a potential flow is characterized by an irrotational velocity field, which is a valid approximation for several applications...
and pressure field. In the case of airfoils, the pressure field modification results in an increase in pressure drag, and if severe enough will also result in loss of lift and stall
Stall (flight)
In fluid dynamics, a stall is a reduction in the lift coefficient generated by a foil as angle of attack increases. This occurs when the critical angle of attack of the foil is exceeded...
, all of which are undesirable. For internal flows, flow separation produces an increase
in the flow losses, and stall-type phenomena such as compressor
Gas compressor
A gas compressor is a mechanical device that increases the pressure of a gas by reducing its volume.Compressors are similar to pumps: both increase the pressure on a fluid and both can transport the fluid through a pipe. As gases are compressible, the compressor also reduces the volume of a gas...
surge, both undesirable phenomena.