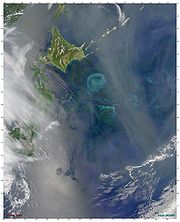 In fluid dynamics
Fluid dynamics
In physics, fluid dynamics is a sub-discipline of fluid mechanics that deals with fluid flow—the natural science of fluids in motion. It has several subdisciplines itself, including aerodynamics and hydrodynamics...
, an eddy is the swirling of a fluid
Fluid
In physics, a fluid is a substance that continually deforms under an applied shear stress. Fluids are a subset of the phases of matter and include liquids, gases, plasmas and, to some extent, plastic solids....
and the reverse current created when the fluid flows past an obstacle. The moving fluid creates a space devoid of downstream-flowing fluid on the downstream side of the object. Fluid behind the obstacle flows into the void creating a swirl of fluid on each edge of the obstacle, followed by a short reverse flow of fluid behind the obstacle flowing upstream, toward the back of the obstacle. This phenomenon is most visible behind large emergent rocks in swift-flowing rivers.

Another possible type of turbulence
Turbulence
In fluid dynamics, turbulence or turbulent flow is a flow regime characterized by chaotic and stochastic property changes. This includes low momentum diffusion, high momentum convection, and rapid variation of pressure and velocity in space and time...
is the vortex
Vortex
A vortex is a spinning, often turbulent,flow of fluid. Any spiral motion with closed streamlines is vortex flow. The motion of the fluid swirling rapidly around a center is called a vortex...
. This notion is now applied to gas
Gas
Gas is one of the three classical states of matter . Near absolute zero, a substance exists as a solid. As heat is added to this substance it melts into a liquid at its melting point , boils into a gas at its boiling point, and if heated high enough would enter a plasma state in which the electrons...
es, which have the same properties as liquids. Here, no void is created, but only an area of lower pressure, but again, a backflow causes the gas to rotate
Rotation
A rotation is a circular movement of an object around a center of rotation. A three-dimensional object rotates always around an imaginary line called a rotation axis. If the axis is within the body, and passes through its center of mass the body is said to rotate upon itself, or spin. A rotation...
.

Eddies are common in the ocean, and range in diameter from centimeters, to hundreds of kilometers. The smallest scale eddies may last for a matter of seconds, while the larger features may persist for months to years. Those eddies which are between about 10 and 500 km in diameter, and persist for periods of days to months are commonly referred to in oceanography as mesoscale eddies.

Mesoscale ocean eddies are characterized by currents which flow in a roughly circular motion around the center of the eddy. The sense of rotation of these currents may either be cyclonic or anticyclonic. Oceanic eddies are also usually made of water masses that are different to those outside of the eddy. That is, the water within an eddy usually has different temperature and salinity characteristics to the water outside of the eddy. There is a direct link between the water mass properties of an eddy and its rotation. Warm eddies rotate anti-cyclonically, while cold eddies rotate cyclonically
Cyclone
In meteorology, a cyclone is an area of closed, circular fluid motion rotating in the same direction as the Earth. This is usually characterized by inward spiraling winds that rotate anticlockwise in the Northern Hemisphere and clockwise in the Southern Hemisphere of the Earth. Most large-scale...
.

Because eddies may have a vigorous circulation associated with them, they are of concern to naval and commercial operations at sea. Further, because eddies transport anomalously warm or cold water as they move, they have an important influence on heat transport in certain parts of the ocean.