The network was founded as the Educational Television and Radio Center (ETRC) in November 1952 by a grant from the Ford Foundation
Ford Foundation
The Ford Foundation is a private foundation incorporated in Michigan and based in New York City created to fund programs that were chartered in 1936 by Edsel Ford and Henry Ford....
's Fund for Adult Education
Adult education
Adult education is the practice of teaching and educating adults. Adult education takes place in the workplace, through 'extension' school or 'school of continuing education' . Other learning places include folk high schools, community colleges, and lifelong learning centers...
. It was originally a limited service for exchanging and distributing educational television
Educational television
Educational television is the use of television programs in the field of distance education. It may be in the form of individual television programs or dedicated specialty channels that is often associated with cable television in the United States as Public, educational, and government access ...
programs produced by local television stations to other stations; it did not produce any material by itself.

In the spring of 1954, ETRC moved to Ann Arbor, Michigan
Ann Arbor, Michigan
Ann Arbor is a city in the U.S. state of Michigan and the county seat of Washtenaw County. The 2010 census places the population at 113,934, making it the sixth largest city in Michigan. The Ann Arbor Metropolitan Statistical Area had a population of 344,791 as of 2010...
, and on May 16 of that year it began its operation as a "network". It put together a daily five-hour package of television shows, releasing it primarily on kinescope
Kinescope
Kinescope , shortened to kine , also known as telerecording in Britain, is a recording of a television program made by filming the picture from a video monitor...
film to the affiliated stations by mail. The programming was noted for treating subjects in depth, including hourlong interviews with people of literary and historical importance. The programming was also noted for being dry and academic, with little consideration given to entertainment value, a marked contrast to commercial television
Commercial Television
Commercial Television was the third free-to-air broadcast television station in Hong Kong. It first went on air in 1975, and ceased transmissions in 1978.-History:...
. Many of the shows were designed as adult education, and ETRC was nicknamed the "University of the Air".

The center's headquarters moved from Ann Arbor, Michigan
Ann Arbor, Michigan
Ann Arbor is a city in the U.S. state of Michigan and the county seat of Washtenaw County. The 2010 census places the population at 113,934, making it the sixth largest city in Michigan. The Ann Arbor Metropolitan Statistical Area had a population of 344,791 as of 2010...
to New York City
New York City
New York is the most populous city in the United States and the center of the New York Metropolitan Area, one of the most populous metropolitan areas in the world. New York exerts a significant impact upon global commerce, finance, media, art, fashion, research, technology, education, and...
in 1958 and the organization became known as the National Educational Television and Radio Center (NETRC).

The organization changed tack again in November 1963. It renamed itself National Educational Television, and spun off its radio assets. Under the centerpiece show NET Journal, NET began to air controversial, hard-hitting documentaries
Documentary film
Documentary films constitute a broad category of nonfictional motion pictures intended to document some aspect of reality, primarily for the purposes of instruction or maintaining a historical record...
that explored numerous social issues of the day such as poverty
Poverty
Poverty is the lack of a certain amount of material possessions or money. Absolute poverty or destitution is inability to afford basic human needs, which commonly includes clean and fresh water, nutrition, health care, education, clothing and shelter. About 1.7 billion people are estimated to live...
and racism
Racism
Racism is the belief that inherent different traits in human racial groups justify discrimination. In the modern English language, the term "racism" is used predominantly as a pejorative epithet. It is applied especially to the practice or advocacy of racial discrimination of a pernicious nature...
. While praised by critics, many affiliates, especially those in politically and culturally conservative
Conservatism
Conservatism is a political and social philosophy that promotes the maintenance of traditional institutions and supports, at the most, minimal and gradual change in society. Some conservatives seek to preserve things as they are, emphasizing stability and continuity, while others oppose modernism...
markets, objected to the perceived liberal
Liberalism
Liberalism is the belief in the importance of liberty and equal rights. Liberals espouse a wide array of views depending on their understanding of these principles, but generally, liberals support ideas such as constitutionalism, liberal democracy, free and fair elections, human rights,...
slant of the programming. http://www.museum.tv/eotvsection.php?entrycode=nationaleduc

In 1966, NET's viability came into question when the Ford Foundation decided to begin withdrawing financial support because of NET's continual need for additional funding. In the meantime, the affiliated stations tried to keep the network alive by developing a reliable source of revenue. 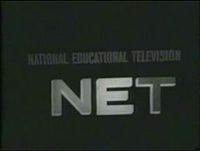 PBS
Public Broadcasting Service
The Public Broadcasting Service is an American non-profit public broadcasting television network with 354 member TV stations in the United States which hold collective ownership. Its headquarters is in Arlington, Virginia....
first began operations in 1969, with NET still producing several shows. However, NET's refusal to stop airing the critically praised but controversial documentaries led to the decision of both Ford and the CPB to shut the network down. In early 1970, both threatened to cut their funding unless NET merged its operations with Newark, New Jersey
Newark, New Jersey
Newark is the largest city in the American state of New Jersey, and the seat of Essex County. As of the 2010 United States Census, Newark had a population of 277,140, maintaining its status as the largest municipality in New Jersey. It is the 68th largest city in the U.S...
public station WNDT-TV. (This did not, however, end the production and distribution of hard-hitting documentaries on public television, since PBS itself continues to distribute and CPB continues to help fund series including Frontline, POV
P.O.V.
POV is a Public Broadcasting Service Public television series which features independent nonfiction films. POV is a cinema term for "point of view"....
and Independent Lens
Independent Lens
Airing weekly on PBS through ITVS, the Emmy Award-winning series Independent Lens introduces new drama and documentary films made by independent filmmakers. Past seasons of Independent Lens have been presented by hosts Angela Bassett, Don Cheadle, Susan Sarandon, Edie Falco, Terrence Howard, Maggie...
to this day.)