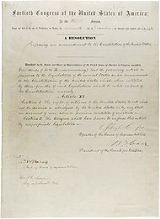 The Fifteenth Amendment is the third of the Reconstruction Amendments
Reconstruction Amendments
The Reconstruction Amendments are the Thirteenth, Fourteenth, and Fifteenth amendments to the United States Constitution, adopted between 1865 and 1870, the five years immediately following the Civil War...
. This amendment prohibits the states and the federal government from using a citizen's race (this applies to all races), color or previous status as a slave as a voting qualification. The North Carolina Supreme Court
North Carolina Supreme Court
The Supreme Court of North Carolina is the state's highest appellate court. Until the creation of the North Carolina Court of Appeals in the 1960s, it was the state's only appellate court. The Supreme Court consists of six associate justices and one chief justice, although the number of justices...
upheld this right of free men of color to vote; in response, amendments to the North Carolina Constitution
North Carolina Constitution
The Constitution of the State of North Carolina governs the structure and function of the state government of North Carolina, United States; it is the highest legal document for the state and subjugates North Carolina law...
removed the right in 1835. Granting free men of color the right to vote could be seen as giving them the rights of citizens, an argument explicitly made by Justice Curtis's
Benjamin Robbins Curtis
Benjamin Robbins Curtis was an American attorney and United States Supreme Court Justice.Curtis was the first and only Whig justice of the Supreme Court. He was also the first Supreme Court justice to have a formal legal degree and is the only justice to have resigned from the court over a matter...
dissent in Dred Scott v. Sandford
Dred Scott v. Sandford
Dred Scott v. Sandford, , also known as the Dred Scott Decision, was a ruling by the U.S. Supreme Court that people of African descent brought into the United States and held as slaves were not protected by the Constitution and could never be U.S...
:
Both the final House and Senate versions of the amendment broadly protected the right of citizens to vote and to hold office. The final House version read, "The right of citizens of the United States to vote and hold office shall not be denied or abridged by any State on the account of race, color, nativity, property, creed or previous condition of servitude". Likewise, the final Senate version read, "No discrimination in the exercise by any citizen of the United States of the elective franchise, or in the privilege of holding office, shall in any State be based upon race, color or previous condition of said citizen or his ancestors."

However, both versions of the amendment posed serious challenges in being ratified by three-fourths of the states. A handful of states still required voters and candidates to be Christian. Southern Republicans were reluctant to undermine loyalty tests, which the Reconstruction state governments used to limit the influence of ex-Confederates, and partly because some Northern and Western politicians wanted to continue disenfranchising non-native Irish and Chinese.

To increase chances of ratification, the amendment was revised in a conference committee to remove any reference to holding office and only prohibited discrimination based on race, color or previous condition of servitude. Yet, despite these changes, ratification of the amendment was still in some doubt.

Virginia, Mississippi, Texas and Georgia, were required to ratify the amendment as a precondition for rejoining the Union and having congressional representation. Besides these States, Nevada ratified the Amendment first, but only after reassurances from U.S. Senator William Stewart that the amendment would not preclude prohibiting the Chinese and Irish immigrants from voting. California and Oregon both opposed the measure out of fear of Chinese immigrants, New York initially ratified the amendment, but legislators later attempted to rescind the ratification, a controversial decision that might have resulted in a court challenge, but for the fact that on March 30, 1870, enough states had ratified the amendment for it to become part of the Constitution.

Thomas Mundy Peterson
Thomas Mundy Peterson
Thomas Mundy Peterson of Perth Amboy, New Jersey was the first African-American to vote in an election under the just-enacted provisions of the 15th Amendment to the United States Constitution...
was the first African American
African American
African Americans are citizens or residents of the United States who have at least partial ancestry from any of the native populations of Sub-Saharan Africa and are the direct descendants of enslaved Africans within the boundaries of the present United States...
to vote after the amendment's adoption. Peterson cast his ballot in an election over whether to revise the city of Perth Amboy's charter or abandon it for a township form of government. His vote was cast at City Hall
Perth Amboy City Hall
City Hall in Perth Amboy, New Jersey is a historic building built in the early 18th century, listed on New Jersey Register of Historic Places and the National Register of Historic Places. It is now the oldest government building still in use in the United States.-History:Construction of the...
in Perth Amboy, New Jersey
Perth Amboy, New Jersey
Perth Amboy is a city in Middlesex County, New Jersey, United States. The City of Perth Amboy is part of the New York metropolitan area. As of the 2010 United States Census, the city population was 50,814. Perth Amboy is known as the "City by the Bay", referring to Raritan Bay.-Name:The Lenape...
on March 31, 1870. On a per capita
Per capita
Per capita is a Latin prepositional phrase: per and capita . The phrase thus means "by heads" or "for each head", i.e. per individual or per person...
and absolute basis, more blacks were elected to public office during the period from 1865 to 1880 than at any other time in American history including a number of state legislatures which were effectively under the control of a strong African American caucus. These legislatures brought in programs that are considered part of government's role now, but at the time were radical, such as universal public education
Public education
State schools, also known in the United States and Canada as public schools,In much of the Commonwealth, including Australia, New Zealand, South Africa, and the United Kingdom, the terms 'public education', 'public school' and 'independent school' are used for private schools, that is, schools...
. They also set all racially biased laws aside, including anti-miscegenation laws
Anti-miscegenation laws
Anti-miscegenation laws, also known as miscegenation laws, were laws that enforced racial segregation at the level of marriage and intimate relationships by criminalizing interracial marriage and sometimes also sex between members of different races...
(laws prohibiting interracial marriage
Interracial marriage
Interracial marriage occurs when two people of differing racial groups marry. This is a form of exogamy and can be seen in the broader context of miscegenation .-Legality of interracial marriage:In the Western world certain jurisdictions have had regulations...
).

Despite the efforts of groups like the Ku Klux Klan
Ku Klux Klan
Ku Klux Klan, often abbreviated KKK and informally known as the Klan, is the name of three distinct past and present far-right organizations in the United States, which have advocated extremist reactionary currents such as white supremacy, white nationalism, and anti-immigration, historically...
to intimidate black voters and white Republicans, assurance of federal support for democratically elected southern governments meant that most Republican voters could both vote and rule in confidence. For example, an all-white mob in the Battle of Liberty Place
Battle of Liberty Place
The Battle of Liberty Place was an attempted insurrection by the Crescent City White League against the legal Reconstruction state government on September 14, 1874 in New Orleans, Louisiana, where it was then based....
attempted to take over the interracial government of New Orleans. President Ulysses S. Grant
Ulysses S. Grant
Ulysses S. Grant was the 18th President of the United States as well as military commander during the Civil War and post-war Reconstruction periods. Under Grant's command, the Union Army defeated the Confederate military and ended the Confederate States of America...
sent in federal troops to restore the elected mayor.

However, in order to appease the South
Southern United States
The Southern United States—commonly referred to as the American South, Dixie, or simply the South—constitutes a large distinctive area in the southeastern and south-central United States...
after his close election, Rutherford B. Hayes
Rutherford B. Hayes
Rutherford Birchard Hayes was the 19th President of the United States . As president, he oversaw the end of Reconstruction and the United States' entry into the Second Industrial Revolution...
agreed to withdraw federal troops. He also overlooked rampant fraud and electoral violence in the Deep South
Deep South
The Deep South is a descriptive category of the cultural and geographic subregions in the American South. Historically, it is differentiated from the "Upper South" as being the states which were most dependent on plantation type agriculture during the pre-Civil War period...
, despite several attempts by the Republicans to pass laws protecting the rights of black voters and to punish intimidation. Without the restrictions, voting place violence against blacks and Republicans increased, including instances of murder
Murder
Murder is the unlawful killing, with malice aforethought, of another human being, and generally this state of mind distinguishes murder from other forms of unlawful homicide...
. Most of this was done without any intervention by law enforcement and often even with their cooperation.

By the 1890s, many Southern states had strict voter eligibility laws, including literacy test
Literacy test
A literacy test, in the context of United States political history, refers to the government practice of testing the literacy of potential citizens at the federal level, and potential voters at the state level. The federal government first employed literacy tests as part of the immigration process...
s and poll tax
Poll tax
A poll tax is a tax of a portioned, fixed amount per individual in accordance with the census . When a corvée is commuted for cash payment, in effect it becomes a poll tax...
es. Some states even made it difficult to find a place to register to vote.

The Congress proposed the Fifteenth Amendment on February 26, 1869. The final vote in the Senate was 39 to 13, with 14 not voting. Several fierce advocates of equal rights, such as Massachusetts Senator Charles Sumner
Charles Sumner
Charles Sumner was an American politician and senator from Massachusetts. An academic lawyer and a powerful orator, Sumner was the leader of the antislavery forces in Massachusetts and a leader of the Radical Republicans in the United States Senate during the American Civil War and Reconstruction,...
, abstained from voting because the amendment did not prohibit devices which states might use to restrict black suffrage, such as literacy tests and poll taxes. The vote in the House was 144 to 44, with 35 not voting. The House vote was almost entirely along party lines, with no Democrats supporting the bill and only 3 Republicans voting against it.

The following states ratified the amendment:


Ratification was completed on February 3, 1870. The amendment was subsequently ratified by the following states: