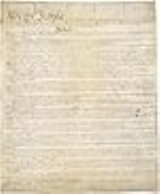 Article 1 of the constitution lists a wide range of powers granted to congress. these delagated, or expressed, powers included the authority to coin m...

Can I buy a authentic copy of the constitute of the United states.
More

What were some historical influences on the Constitution?

What amendments were not ratified and why?

What are some of the most importand amendments to the Constitution?
More

1787    In Philadelphia, Pennsylvania, delegates convene a Constitutional Convention to write a new Constitution for the United States; George Washington presides.

1787    The United States Constitution is signed in Philadelphia, Pennsylvania.

1787    The newly completed United States Constitution is voted on by the U.S. Congress to be sent to the state legislatures for approval.

We the people of the United States, in order to form a more perfect Union, establish justice, insure domestic tranquility, provide for the common defense, promote the general welfare, and secure the blessings of liberty to ourselves and our posterity, do ordain and establish this Constitution for the United States of America.

Preamble to the United States Constitution|Preamble

The President, Vice-President, and all civil officers of the United States, shall be removed from office on impeachment for, and conviction of, treason, bribery, or other high crimes and misdemeanors.

Treason against the United States, shall consist only in levying war against them, or in adhering to their enemies, giving them aid and comfort. No person shall be convicted of treason unless on the testimony of two witnesses to the same overt act, or on the confession in open court.

Congress shall make no law respecting an establishment of religion, or prohibiting the free exercise thereof; or abridging the freedom of speech, or of the press; or the right of the people peaceably to assemble, and to petition the government for a redress of grievances.

A well-regulated militia, being necessary to the security of a free State, the right of the people to keep and bear arms, shall not be infringed.

The right of the people to be secure... against unreasonable searches and seizures, shall not be violated, and no warrants shall issue, but upon probable cause.

Nor shall any person be subject for the same offense to be twice put in jeopardy of life or limb; nor shall be compelled in any criminal case to be a witness against himself, nor be deprived of life, liberty, or property, without due process of law.