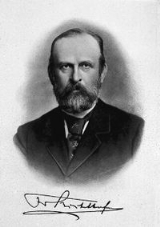 Encyclopedia
Ferdinand Freiherr von Richthofen (5 May 1833 – 6 October 1905) was a German
Germany
Germany , officially the Federal Republic of Germany , is a federal parliamentary republic in Europe. The country consists of 16 states while the capital and largest city is Berlin. Germany covers an area of 357,021 km2 and has a largely temperate seasonal climate...
traveller, geographer
Geographer
A geographer is a scholar whose area of study is geography, the study of Earth's natural environment and human society.Although geographers are historically known as people who make maps, map making is actually the field of study of cartography, a subset of geography...
, and scientist
Scientist
A scientist in a broad sense is one engaging in a systematic activity to acquire knowledge. In a more restricted sense, a scientist is an individual who uses the scientific method. The person may be an expert in one or more areas of science. This article focuses on the more restricted use of the word...
.

He published his geographical, geological, economic, and ethnological findings in three volumes with an atlas, which, however, did not cover the entire field or complete the author's plan. This work appeared at Berlin in 1877-85 under the title of China; Ergebnisse eigner Reisen und darauf gegründeter Studien. In this standard work, the author deals not only with geology but with every subject necessary to a general geographical treatise. Notably he paid close attention to the economic resources of the country he traversed. He also wrote a valuable series of letters to the Shanghai Chamber of Commerce, and first drew attention to the importance of the coalfields of Shantung, and of Kiaochow as a port.

He was appointed professor of geology
Geology
Geology is the science comprising the study of solid Earth, the rocks of which it is composed, and the processes by which it evolves. Geology gives insight into the history of the Earth, as it provides the primary evidence for plate tectonics, the evolutionary history of life, and past climates...
at the University of Bonn
University of Bonn
The University of Bonn is a public research university located in Bonn, Germany. Founded in its present form in 1818, as the linear successor of earlier academic institutions, the University of Bonn is today one of the leading universities in Germany. The University of Bonn offers a large number...
beginning in 1875, but being fully occupied with his work in China he did not take up professorial duties until 1879. He became professor of geography
Geography
Geography is the science that studies the lands, features, inhabitants, and phenomena of Earth. A literal translation would be "to describe or write about the Earth". The first person to use the word "geography" was Eratosthenes...
at the University of Leipzig
University of Leipzig
The University of Leipzig , located in Leipzig in the Free State of Saxony, Germany, is one of the oldest universities in the world and the second-oldest university in Germany...
in 1883, and professor of geography at the Friedrich Wilhelm University of Berlin
Humboldt University of Berlin
The Humboldt University of Berlin is Berlin's oldest university, founded in 1810 as the University of Berlin by the liberal Prussian educational reformer and linguist Wilhelm von Humboldt, whose university model has strongly influenced other European and Western universities...
in 1886. He occupied the latter position until his death. His lectures attracted numerous students who subsequently became eminent in geographical work, and in order to keep in touch with them he established his weekly geographical “colloquium.” Among his most famous students was Sven Hedin
Sven Hedin
Sven Anders Hedin KNO1kl RVO was a Swedish geographer, topographer, explorer, photographer, and travel writer, as well as an illustrator of his own works...
, the Swedish explorer. He served as president of the German Geographical Society for many years, and founded the Berlin Hydrographical Institute.

He is noted for coining the terms "Seidenstraße" and "Seidenstraßen" = "Silk Road
Silk Road
The Silk Road or Silk Route refers to a historical network of interlinking trade routes across the Afro-Eurasian landmass that connected East, South, and Western Asia with the Mediterranean and European world, as well as parts of North and East Africa...
(s)" or "Silk Route(s)" in 1877. He also standardized the practices of chorography
Chorography
Chorography is a term deriving from the writings of the ancient geographer Ptolemy, meaning the geographical description of regions...
and chorology
Chorology
Chorology can mean* the study of the causal relations between geographical phenomena occurring within a particular region* the study of the spatial distribution of organisms....
.