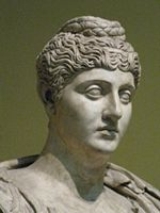 Encyclopedia
Annia Galeria Faustina, more familiarly referred to as Faustina I (Latin
Latin
Latin is an Italic language originally spoken in Latium and Ancient Rome. It, along with most European languages, is a descendant of the ancient Proto-Indo-European language. Although it is considered a dead language, a number of scholars and members of the Christian clergy speak it fluently, and...
: Faustina Major; born on September 21, in about A.D.100; died in October or November of A.D.140 ), was a Roman Empress and wife of Roman Emperor
Roman Emperor
The Roman emperor was the ruler of the Roman State during the imperial period . The Romans had no single term for the office although at any given time, a given title was associated with the emperor...
Antoninus Pius
Antoninus Pius
Antoninus Pius , also known as Antoninus, was Roman Emperor from 138 to 161. He was a member of the Nerva-Antonine dynasty and the Aurelii. He did not possess the sobriquet "Pius" until after his accession to the throne...
.

Faustina was the only known daughter of consul and prefect Marcus Annius Verus
Marcus Annius Verus
Marcus Annius Verus was a Roman man who lived in the 1st and 2nd century. He was the son of an elder Marcus Annius Verus, who gained the rank of senator and praetor. His family originated from Uccibi near Corduba in Spain...
and Rupilia
Rupilia
Rupilia Faustina was an influential Roman noble woman. She was the daughter of Salonina Matidia and suffect consul Lucius Scribonius Libo Rupilius Frugi Bonus. She possibly had another sister called Rupilia Annia....
Faustina. Her brothers were consul Marcus Annius Libo
Marcus Annius Libo
Marcus Annius Libo was a Roman who lived in the 2nd century. He was the son of Roman consul Marcus Annius Verus and Rupilia Faustina. He was consul in 128 and suffect consul in 161....
and praetor
Praetor
Praetor was a title granted by the government of Ancient Rome to men acting in one of two official capacities: the commander of an army, usually in the field, or the named commander before mustering the army; and an elected magistratus assigned varied duties...
Marcus Annius Verus
Marcus Annius Verus (praetor)
Marcus Annius Verus was a distinguished Roman politician who lived in the 2nd century, served as a praetor and was the biological father of the Emperor Marcus Aurelius....
. Her maternal aunts were Roman Empress Vibia Sabina
Vibia Sabina
Vibia Sabina was a Roman Empress, wife and second cousin, once removed, to Roman Emperor Hadrian. She was the daughter to Salonina Matidia , and suffect consul Lucius Vibius Sabinus...
and Matidia Minor
Matidia Minor
Mindia Matidia or Matidia Minor was related to several important ancient Roman Emperors. The modern village of Matigge Italy, is named after her....
. Her paternal grandfather had the same name as her father and her maternal grandparents were Salonina Matidia
Salonina Matidia
Salonina Matidia was the daughter and only child of Ulpia Marciana and wealthy praetor Gaius Salonius Matidius Patruinus. Her maternal uncle was the Roman emperor Trajan. Trajan had no children and treated her like his daughter...
(niece of Roman Emperor Trajan
Trajan
Trajan , was Roman Emperor from 98 to 117 AD. Born into a non-patrician family in the province of Hispania Baetica, in Spain Trajan rose to prominence during the reign of emperor Domitian. Serving as a legatus legionis in Hispania Tarraconensis, in Spain, in 89 Trajan supported the emperor against...
) and suffect consul Lucius Scribonius Libo Rupilius Frugi Bonus
Libo Rupilius Frugi
Libo Rupilius Frugi , whose full name may have been Lucius Scribonius Libo Rupilius Frugi Bonus, was a Roman Suffect Consul and an ancestor to Roman Emperor Marcus Aurelius....
. Faustina was born and raised in Rome
Rome
Rome is the capital of Italy and the country's largest and most populated city and comune, with over 2.7 million residents in . The city is located in the central-western portion of the Italian Peninsula, on the Tiber River within the Lazio region of Italy.Rome's history spans two and a half...
.

As a private citizen, she married Antoninus Pius between 110 and 115. Faustina and Antoninus had a very happy marriage. Faustina bore Antoninus four children, two sons and two daughters. They were:

On July 10, 138, her uncle, Emperor Hadrian
Hadrian
Hadrian , was Roman Emperor from 117 to 138. He is best known for building Hadrian's Wall, which marked the northern limit of Roman Britain. In Rome, he re-built the Pantheon and constructed the Temple of Venus and Roma. In addition to being emperor, Hadrian was a humanist and was philhellene in...
, died and her husband became the new emperor, as Antoninus was Hadrian's adopted son and heir. Faustina became Roman Empress and the Senate accorded her the title of Augusta
Augusta (honorific)
Augusta was the imperial honorific title of empresses. It was given to the women of the Roman and Byzantine imperial families. In the third century, Augustae could also receive the titles of Mater castrorum and Mater Patriae .The title implied the greatest prestige, with the Augustae able to...
. As empress, Faustina was well respected and was renowned for her beauty and wisdom. The Augustan History
Augustan History
The Augustan History is a late Roman collection of biographies, in Latin, of the Roman Emperors, their junior colleagues and usurpers of the period 117 to 284...
criticized her as having "excessive frankness" and "levity". Throughout her life, as a private citizen and as empress, Faustina was involved in assisting charities for the poor and sponsoring and assisting in the education of Roman children, particularly girls.

She can be viewed as one of the most moral, stable and respected empresses in the history of the Roman Empire
Roman Empire
The Roman Empire was the post-Republican period of the ancient Roman civilization, characterised by an autocratic form of government and large territorial holdings in Europe and around the Mediterranean....
. When Faustina died, Antoninus was in complete mourning for Faustina.

Antoninus did the following in memory of his wife:

In 2008, archaeologists digging at the ancient site of Sagalassos
Sagalassos
Sagalassos is an archaeological site in southwestern Turkey, about 100 km north of Antalya , and 30 km from Burdur and Isparta...
in Turkey
Turkey
Turkey , known officially as the Republic of Turkey , is a Eurasian country located in Western Asia and in East Thrace in Southeastern Europe...
discovered a colossal marble head which is believed to be that of Faustina.