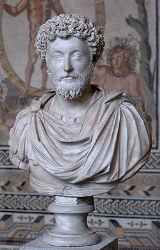 Overview
Marcus Aurelius was Roman Emperor
Roman Emperor
The Roman emperor was the ruler of the Roman State during the imperial period . The Romans had no single term for the office although at any given time, a given title was associated with the emperor...
from 161 to 180 AD. He ruled with Lucius Verus
Lucius Verus
Lucius Verus , was Roman co-emperor with Marcus Aurelius, from 161 until his death.-Early life and career:Lucius Verus was the first born son to Avidia Plautia and Lucius Aelius Verus Caesar, the first adopted son and heir of Roman Emperor Hadrian . He was born and raised in Rome...
as co-emperor from 161 until Verus' death in 169. He was the last of the "Five Good Emperors", and is also considered one of the most important Stoic
Stoicism
Stoicism is a school of Hellenistic philosophy founded in Athens by Zeno of Citium in the early . The Stoics taught that destructive emotions resulted from errors in judgment, and that a sage, or person of "moral and intellectual perfection," would not suffer such emotions.Stoics were concerned...
philosophers.
During his reign, the Empire defeated a revitalized Parthian Empire
Parthian Empire
The Parthian Empire , also known as the Arsacid Empire , was a major Iranian political and cultural power in ancient Persia...
; Aurelius' general Avidius Cassius
Avidius Cassius
Gaius Avidius Cassius was a Roman general and usurper who briefly ruled Egypt and Syria in 175.-Origins:He was the son of Gaius Avidius Heliodorus, a noted orator who was Prefect of Egypt from 137 to 142 under Hadrian, and wife Junia Cassia Alexandra...
sacked the capital Ctesiphon
Ctesiphon
Ctesiphon, the imperial capital of the Parthian Arsacids and of the Persian Sassanids, was one of the great cities of ancient Mesopotamia.The ruins of the city are located on the east bank of the Tigris, across the river from the Hellenistic city of Seleucia...
in 164. Aurelius fought the Marcomanni
Marcomanni
The Marcomanni were a Germanic tribe, probably related to the Buri, Suebi or Suevi.-Origin:Scholars believe their name derives possibly from Proto-Germanic forms of "march" and "men"....
, Quadi
Quadi
The Quadi were a smaller Germanic tribe, about which little is definitively known. We only know the Germanic tribe the Romans called the 'Quadi' through reports of the Romans themselves...
, and Sarmatians
Sarmatians
The Iron Age Sarmatians were an Iranian people in Classical Antiquity, flourishing from about the 5th century BC to the 4th century AD....
with success during the Marcomannic Wars
Marcomannic Wars
The Marcomannic Wars were a series of wars lasting over a dozen years from about AD 166 until 180. These wars pitted the Roman Empire against the Marcomanni, Quadi and other Germanic peoples, along both sides of the upper and middle Danube...
, but the threat of the Germanic tribes
Germanic peoples
The Germanic peoples are an Indo-European ethno-linguistic group of Northern European origin, identified by their use of the Indo-European Germanic languages which diversified out of Proto-Germanic during the Pre-Roman Iron Age.Originating about 1800 BCE from the Corded Ware Culture on the North...
began to represent a troubling reality for the Empire.

Need the text of the letter sent by Mar us Aurelius Cicero's brother offering points of political advice to successfully "campaign " to become Counsel...
More

173    Marcomannic Wars: The Roman army in Moravia is encircled by the Quadi, who has broken the peace treaty (171). In a violent thunderstorm emperor Marcus Aurelius defeats and subdue them in the so-called "miracle of the rain".

176    Emperor Marcus Aurelius grant his son Commodus the rank of ''Imperator'' and makes him Supreme Commander of the Roman legions.

Say to yourself in the early morning: I shall meet today inquisitive, ungrateful, violent, treacherous, envious, uncharitable men. All these things have come upon them through ignorance of real good and ill.

You will find rest from vain fancies if you perform every act in life as though it were your last.

The longest-lived and the shortest-lived man, when they come to die, lose one and the same thing.

This thou must always bear in mind, what is the nature of the whole...

A man should be upright, not kept upright.

Never esteem anything as of advantage to you that will make you break your word or lose your self-respect.

Remember that man lives only in the present, in this fleeting instant; all the rest of his life is either past and gone, or not yet revealed.

By a tranquil mind I mean nothing else than a mind well ordered.

Men seek retreats for themselves, houses in the country, sea-shores, and mountains; and thou too art wont to desire such things very much. But this is altogether a mark of the most common sort of men, for it is in thy power whenever thou shalt choose to retire into thyself. For nowhere either with more quiet or more freedom from trouble does a man retire than into his own soul