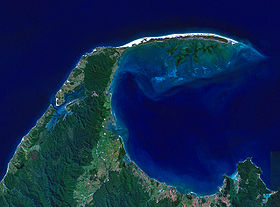 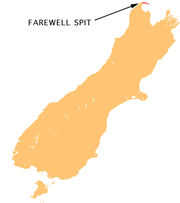 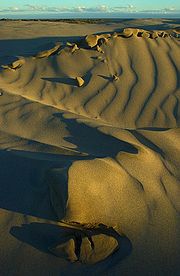 Farewell Spit is a narrow sand spit
Spit (landform)
A spit or sandspit is a deposition landform found off coasts. At one end, spits connect to land, and extend into the sea. A spit is a type of bar or beach that develops where a re-entrant occurs, such as at cove's headlands, by the process of longshore drift...
situated at 40°31′S 172°52′E, at the northern end of the South Island
South Island
The South Island is the larger of the two major islands of New Zealand, the other being the more populous North Island. It is bordered to the north by Cook Strait, to the west by the Tasman Sea, to the south and east by the Pacific Ocean...
of New Zealand
New Zealand
New Zealand is an island country in the south-western Pacific Ocean comprising two main landmasses and numerous smaller islands. The country is situated some east of Australia across the Tasman Sea, and roughly south of the Pacific island nations of New Caledonia, Fiji, and Tonga...
. Known to the Māori as Tuhuroa, it runs eastwards from Cape Farewell
Cape Farewell, New Zealand
thumb|right|Clifftop walk, looking northeast.Cape Farewell is a headland in New Zealand, the most northerly point on the South Island. It is located just west of Farewell Spit...
, the island's northernmost point. It is located about 50 kilometres north of Takaka and 20 kilometres from Collingwood
Collingwood, New Zealand
Collingwood is a town in the north-west corner of the South Island of New Zealand. It is located in the hub of the Aorere Valley, in the western half of the Golden Bay area.-Geography:The town lies at the end of State Highway 60 in Golden Bay...
.

It forms the northern side of Golden Bay
Golden Bay
Golden Bay lies at the edge of the junction between the Tasman Sea and Cook Strait. It stretches for 45 kilometres from the long sand spit of Farewell Spit in the north to Separation Point in Abel Tasman National Park at its southern extremity...
and is the longest sandspit in New Zealand, stretching for about 26 km above sea level and another 6 km underwater. The spit runs in from west to east, and is made from fine golden sand - as Cape Farewell
Cape Farewell, New Zealand
thumb|right|Clifftop walk, looking northeast.Cape Farewell is a headland in New Zealand, the most northerly point on the South Island. It is located just west of Farewell Spit...
to the west of the spit is mostly composed of late Cretaceous
Cretaceous
The Cretaceous , derived from the Latin "creta" , usually abbreviated K for its German translation Kreide , is a geologic period and system from circa to million years ago. In the geologic timescale, the Cretaceous follows the Jurassic period and is followed by the Paleogene period of the...
quartz
Quartz
Quartz is the second-most-abundant mineral in the Earth's continental crust, after feldspar. It is made up of a continuous framework of SiO4 silicon–oxygen tetrahedra, with each oxygen being shared between two tetrahedra, giving an overall formula SiO2. There are many different varieties of quartz,...
sandstone
Sandstone
Sandstone is a sedimentary rock composed mainly of sand-sized minerals or rock grains.Most sandstone is composed of quartz and/or feldspar because these are the most common minerals in the Earth's crust. Like sand, sandstone may be any colour, but the most common colours are tan, brown, yellow,...
s, i.e. silica but with traces of other heavy minerals, garnet
Garnet
The garnet group includes a group of minerals that have been used since the Bronze Age as gemstones and abrasives. The name "garnet" may come from either the Middle English word gernet meaning 'dark red', or the Latin granatus , possibly a reference to the Punica granatum , a plant with red seeds...
, ilmenite
Ilmenite
Ilmenite is a weakly magnetic titanium-iron oxide mineral which is iron-black or steel-gray. It is a crystalline iron titanium oxide . It crystallizes in the trigonal system, and it has the same crystal structure as corundum and hematite....
, magnetite
Magnetite
Magnetite is a ferrimagnetic mineral with chemical formula Fe3O4, one of several iron oxides and a member of the spinel group. The chemical IUPAC name is iron oxide and the common chemical name is ferrous-ferric oxide. The formula for magnetite may also be written as FeO·Fe2O3, which is one part...
and pyroxene
Pyroxene
The pyroxenes are a group of important rock-forming inosilicate minerals found in many igneous and metamorphic rocks. They share a common structure consisting of single chains of silica tetrahedra and they crystallize in the monoclinic and orthorhombic systems...
. The erosion of the cliffs into fine sand carried on the sea currents creates Farewell spit further east. The continual movement of the currents piles up the sand in a curved hook shape. Predictions state that the spit will grow almost 2 km in the next 5 years alone.

The northern side of the dunes are steeper and unstable being constantly exposed to the prevailing winds which average over 25 km/h. The southern side, that which faces Golden Bay is more stable and largely covered with vegetation. The tide here can recede as much as seven kilometres exposing some 80 square kilometres of mud flats; a rich feeding ground for the many sea birds in the area but also a death trap to the frequently stranded whales.

Abel Tasman
Abel Tasman
Abel Janszoon Tasman was a Dutch seafarer, explorer, and merchant, best known for his voyages of 1642 and 1644 in the service of the VOC . His was the first known European expedition to reach the islands of Van Diemen's Land and New Zealand and to sight the Fiji islands...
in 1642 was the first European to see the spit, calling it Sand Duining Hoeck. Captain James Cook
James Cook
Captain James Cook, FRS, RN was a British explorer, navigator and cartographer who ultimately rose to the rank of captain in the Royal Navy...
was the next European visitor in 1770, showing Farewell Spit as a broad peninsula on his maps. He named close by Cape Farewell, and the name stuck, with early European settlers originally calling the sandbanks 'Cape Farewell Spit' before it was shortened to its present name. It was the last land he sighted after leaving New Zealand for Australia at the end of his first voyage
First voyage of James Cook
The first voyage of James Cook was a combined Royal Navy and Royal Society expedition to the south Pacific ocean aboard HMS Endeavour, from 1768 to 1771...
.

The lighthouse
Lighthouse
A lighthouse is a tower, building, or other type of structure designed to emit light from a system of lamps and lenses or, in older times, from a fire, and used as an aid to navigation for maritime pilots at sea or on inland waterways....
at the end of the spit was first lit in 1870. The last lighthouse keeper left in 1984 when it became automatic.

Tours include the opportunity to jump off a sand dune, a visit to the lighthouse and the gannet
Gannet
Gannets are seabirds comprising the genus Morus, in the family Sulidae, closely related to the boobies.The gannets are large black and white birds with yellow heads. They have long pointed wings and long bills. Northern gannets are the largest seabirds in the North Atlantic, with a wingspan of up...
colony. The south side of Farewell Spit is home to many thousands of sea birds; it also the site of frequent whale strandings mainly by Long-Finned Pilot Whale
Long-finned Pilot Whale
The long-finned pilot whale is one of the two species of cetacean in the genus Globicephala. It belongs to the oceanic dolphin family , though its behavior is closer to that of the larger whales.-Description:...
s. The northern side is bounded by the Tasman Sea
Tasman Sea
The Tasman Sea is the large body of water between Australia and New Zealand, approximately across. It extends 2,800 km from north to south. It is a south-western segment of the South Pacific Ocean. The sea was named after the Dutch explorer Abel Janszoon Tasman, the first recorded European...
.
The source of this article is wikipedia, the free encyclopedia.  The text of this article is licensed under the GFDL.