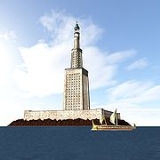 Overview
A lighthouse is a tower, building, or other type of structure designed to emit light from a system of lamps and lenses or, in older times, from a fire, and used as an aid to navigation for maritime pilot
Maritime pilot
A pilot is a mariner who guides ships through dangerous or congested waters, such as harbours or river mouths. With the exception of the Panama Canal, the pilot is only an advisor, as the captain remains in legal, overriding command of the vessel....
s at sea or on inland waterways.

Lighthouses mark dangerous coastlines, hazardous shoal
Shoal
Shoal, shoals or shoaling may mean:* Shoal, a sandbank or reef creating shallow water, especially where it forms a hazard to shipping* Shoal draught , of a boat with shallow draught which can pass over some shoals: see Draft...
s, reef
Reef
In nautical terminology, a reef is a rock, sandbar, or other feature lying beneath the surface of the water ....
s, safe entries to harbors, and can also assist in aerial navigation. Once widely used, the number of operational lighthouses has declined due to the expense of maintenance and replacement by modern electronic navigational devices.
In a lighthouse, the source of light is called the "lamp" (whether electric or fueled by oil) and the concentration of the light is by the "lens" or "optic".
Originally lit by open fires and later candles, the Argand hollow wick lamp
Argand lamp
The Argand lamp is home lighting oil lamp producing a light output of 6 to 10 candlepower which was invented and patented in 1780 by Aimé Argand...
and parabolic reflector was developed around 1781 in Europe.