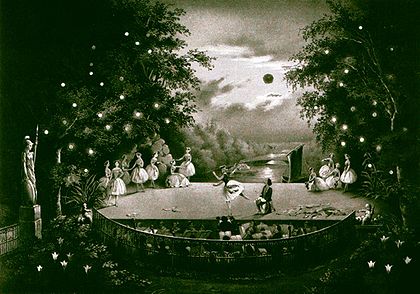 Ondine, ou La naïade is a ballet
Ballet
Ballet is a type of performance dance, that originated in the Italian Renaissance courts of the 15th century, and which was further developed in France and Russia as a concert dance form. The early portions preceded the invention of the proscenium stage and were presented in large chambers with...
with choreography by Jules Perrot
Jules Perrot
Jules-Joseph Perrot was a dancer and choreographer who later became Balletmaster of the Imperial Ballet in St. Petersburg, Russia...
and music by Cesare Pugni
Cesare Pugni
Cesare Pugni was an Italian composer of ballet music, a pianist and a violinist. In his early career he composed operas, symphonies, and various other forms of orchestral music. Pugni is most noted for the ballets he composed while serving as Composer of the Ballet Music to Her Majesty's Theatre...
, with a libretto inspired by the novel Undine
Undine (novella)
Undine is a novel by Friedrich de la Motte Fouqué in which Undine, a water spirit, marries a knight named Huldebrand in order to gain a soul. It is an early German romance, which has been translated into English and other languages...
by Friedrich de la Motte Fouqué
Friedrich de la Motte Fouqué
Friedrich Heinrich Karl de la Motte, Baron Fouqué was a German writer of the romantic style.-Biography:He was born at Brandenburg an der Havel, of a family of French Huguenot origin, as evidenced in his family name...
. Pugni dedicated his score to the Duchess of Cambridge, Princess Augusta, a long-time balletomane and patron of the arts in London. Whilst the original London production used the title Ondine, ou La naïade, Perrot staged a revival of the ballet under the title, La naïade et le pêcheur, a title which was used for all subsequent productions of the ballet.

The ballet was first presented by the ballet of Her Majesty's Theatre
Her Majesty's Theatre
Her Majesty's Theatre is a West End theatre, in Haymarket, City of Westminster, London. The present building was designed by Charles J. Phipps and was constructed in 1897 for actor-manager Herbert Beerbohm Tree, who established the Royal Academy of Dramatic Art at the theatre...
, London
London
London is the capital city of :England and the :United Kingdom, the largest metropolitan area in the United Kingdom, and the largest urban zone in the European Union by most measures. Located on the River Thames, London has been a major settlement for two millennia, its history going back to its...
on 22 June 1843. Fanny Cerrito
Fanny Cerrito
Fanny Cerrito, originally Francesca Cerrito , was an Italian ballet dancer and choreographer.Born in Naples, she studied under Carlo Blasis and the French choreographers Jules Perrot and Arthur Saint-Léon, to the latter of whom she was married from 1845–1851. Notable roles included Ondine and a...
danced the title rôle, while Perrot himself played her mortal beloved, the fisherman Mattéo.

The original scenery was designed by William Grieve. A contemporary review described it as " ... one of the most beautiful productions that any stage ever boasted of." and praised Cerrito as a " ... step-revealing goddess."

Cesare Pugni's was hailed as a masterwork of ballet music. The Times, a London newspaper, described Pugni's score as 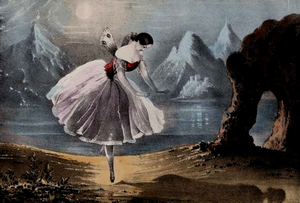 The ballet bore little resemblance to de la Motte Fouqué's Undine
Undine (novella)
Undine is a novel by Friedrich de la Motte Fouqué in which Undine, a water spirit, marries a knight named Huldebrand in order to gain a soul. It is an early German romance, which has been translated into English and other languages...
:


"The plot is no more like the romantic baron's story than it is like that of Robinson Crusoe, excepting so far as a water-nymph is the heroine. Therefore, the readers of Undine have to unlearn all they know, if they would avoid mystification while witnessing the marvels of the new ballet."

Their only point in common appears to be the ill-fated love of a water sprite, Ondine, with for a mortal man who already has a mortal sweetheart. However, the ballet's divergence from the original novel "derive from intermediary works linking the book and the ballet, which Perrot used to enrich and enhance his theatrical conception". The greatest changes that Perrot made to the basic plot were the change of location from the darkly evocative Danube
Danube
The Danube is a river in the Central Europe and the Europe's second longest river after the Volga. It is classified as an international waterway....
to the sunnier shores of Sicily
Sicily
Sicily is a region of Italy, and is the largest island in the Mediterranean Sea. Along with the surrounding minor islands, it constitutes an autonomous region of Italy, the Regione Autonoma Siciliana Sicily has a rich and unique culture, especially with regard to the arts, music, literature,...
, and the transformation of the aristocratic Sir Huldbrand into the humble fisherman Matteo, while Undine's rival Bertalda became the orphan Giannina. In many ways, Perrot's ballet is more similar to René-Charles Guilbert de Pixerécourt's play of the story, Ondine, ou la Nymphe des Eaux, which was first presented in Paris in 1830 while Perrot was also performing there.

During his engagement as Premier Maître de Ballet of the St. Petersburg Imperial Theatres in Russia, Jules Perrot presented an elaborately expanded production of Ondine, ou La Naïade under the title La Naïade et le pêcheur (The Naiad and the Fisherman) at the Imperial Bolshoi Kamenny Theatre on . For the production, Cesare Pugni, who had accompanied Perrot to Russia, extensively revised and expanded his original score of 1843. The production premièred to great success.

On , Perrot presented his production for a performance at Peterhof Palace
Peterhof Palace
The Peterhof Palace in Russian, so German is transliterated as "Петергoф" Petergof into Russian) for "Peter's Court") is actually a series of palaces and gardens located in Saint Petersburg, Russia, laid out on the orders of Peter the Great. These Palaces and gardens are sometimes referred as the...
staged especially for the celebrations held in honor of the name-day of the Grand Duchess Olga Nikolaevna, daughter of Emperor Nicholas I
Nicholas I of Russia
Nicholas I , was the Emperor of Russia from 1825 until 1855, known as one of the most reactionary of the Russian monarchs. On the eve of his death, the Russian Empire reached its historical zenith spanning over 20 million square kilometers...
. For the performance, a stage was erected above the water of the lake of the Ozerky Pavilion.

Marius Petipa revived Perrot's La Naïade et le pêcheur for the Imperial Ballet on several occasions throughout his career as Premier Maître de Ballet during the latter half of the 19th century. In 1867 he revised much of the choreography for the performance of Ekaterina Vazem
Ekaterina Vazem
Ekaterina Vazem was a Russian prima ballerina. She was made famous for first dancing the role of Nikiya in 1877 Marius Petipa's ballet, La Bayadère...
, with Pugni composing two new variations especially for her performance. Petipa later staged his own complete revivals of the full-length work: for the Prima ballerina Eugenia Sokolova, with musical revisions by Ludwig Minkus
Ludwig Minkus
Ludwig Minkus a.k.a. Léon Fyodorovich Minkus was an Austrian composer of ballet music, a violin virtuoso and teacher.Minkus is most noted for the music he composed while serving as Ballet Composer of the St...
. for the Prima ballerina Anna Johansson, with musical revisions by Riccardo Drigo
Riccardo Drigo
Riccardo Eugenio Drigo , a.k.a. Richard Drigo was an Italian composer of ballet music and Italian Opera, a theatrical conductor, and a pianist....
.

Cesare Pugni's grandson, Second Maître de Ballet of the Imperial Theatres and former Premier danseur Alexander Shiryaev, mounted a revival of La Naïade et le pêcheur especially for the Prima ballerina Anna Pavlova. The revival premièred on , and was the last revival of Perrot's ballet staged in Imperial Russia, though the full-length ballet continued being performed by the Leningrad ballet until 1931.

The Ballet Master Pierre Lacotte staged a revival of Perrot's ballet under the title Ondine for the Kirov/Mariinsky Ballet, a production that opened on 16 March 2006 at the Mariinsky Theatre
Mariinsky Theatre
The Mariinsky Theatre is a historic theatre of opera and ballet in Saint Petersburg, Russia. Opened in 1860, it became the preeminent music theatre of late 19th century Russia, where many of the stage masterpieces of Tchaikovsky, Mussorgsky, and Rimsky-Korsakov received their premieres. The...
of St. Petersburg, Russia, with a new version of Cesare Pugni's score assembled from his original composition of 1843 and his revised edition of 1851.

THE SHADOW DANCE FROM "ONDINE."

says Byron; but we require some stronger, more satisfactory reason why, in sober health, we become occasionally indifferent to the beautiful realities of our own earth, and fly to the immortals for ecstacies that, after all, are but a poet's dream. Everybody is not a Numa, and therefore cannot indulge in the blissful phantasy that he holds intercourse with "moulds beyond the earth;" and yet we would if we could, such is our "longing after immortality."

how often hast thou been conjured up to our imagination! But "hence! unreal mockeries, hence!" and leave us to our task, not of criticism on the present occasion, but that of recording one of the most beautiful productions that any stage ever boasted of. The ballet of "Ondine," everybody by this time knows, is founded on La Motte Fouqué's fanciful and interesting story of "Undine," but does not adhere very faithfully to the original. Never mind: narration must give way to impersonation, particularly when we see such a "step-revealing goddess as Cerito [sic: should be Cerrito] in the principal character. Her dancing the pas de l'ombre (which is illustrated above) is in the highest degree beautiful, and inclines us to agree more than ever with the old Greek assertion that "Dancing is silent poetry." Nothing can be more enchanting than Cerito's innocent surprise when she first sees her shadow, and thinks it (or makes you believe she thinks it) to be something tangible and
The dioramic effect of the scene in which this pas occurs reflects the highest possible credit upon Grieve, the artist. No other stage-painter is so acquainted with the use of compound lights, commonly called mediums. It is a splendid specimen of skill in the art, and it is only to be regretted that such things are so evanescent, for we could see them a thousand times "with yet unwearied eyes." Although Cerito is la déesse of the scene, we must not be indifferent to the exquisite grace of Guy Stephan. She is one who could take the place of any more talked-of rival, and leave criticism nothing to do but applaud with rapture. In fact, the danseuse that in the presence of Taglioni was honoured with an encore of one of her pas must be allowed to

Video of Pierre Lacotte's 2007 revival of Ondine for the Kirov/Mariinsky Ballet: