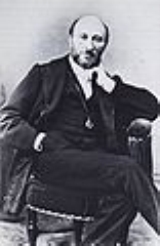 Arthur Saint-Léon was the Maître de Ballet
Ballet Master
Ballet Master is the term used for an employee of a ballet company who is responsible for the level of competence of the dancers in their company...
of St. Petersburg Imperial Ballet
Mariinsky Ballet
The Mariinsky Ballet is a classical ballet company based at the Mariinsky Theatre in Saint Petersburg, Russia. Founded in the 18th century and originally known as the Imperial Russian Ballet, the Mariinsky Ballet is one of the world's leading ballet companies...
from 1859 until 1869 and is famous for creating the choreography of the ballet Coppélia
Coppélia
Coppélia is a sentimental comic ballet with original choreography by Arthur Saint-Léon to a ballet libretto by Saint-Léon and Charles Nuitter and music by Léo Delibes. It was based upon two macabre stories by E. T. A. Hoffmann, Der Sandmann , and Die Puppe...
.

He was born Charles Victor Arthur Michel in Paris, but was raised in Stuttgart
Stuttgart
Stuttgart is the capital of the state of Baden-Württemberg in southern Germany. The sixth-largest city in Germany, Stuttgart has a population of 600,038 while the metropolitan area has a population of 5.3 million ....
, where his father was dance master for the court and the theatre ballet. Saint-Léon was encouraged by his father, who had also been a dancer of the Paris Opéra Ballet, to study music and dance. Saint-Léon studied violin with Joseph Mayseder and Niccolò Paganini
Niccolò Paganini
Niccolò Paganini was an Italian violinist, violist, guitarist, and composer. He was one of the most celebrated violin virtuosi of his time, and left his mark as one of the pillars of modern violin technique...
. At the same time, he studied ballet so he could perform both as violinist and dancer.

When he was 17 years old, he made his début as first demi-charactére dancer at the Théâtre de la Monnaie in Brussels
Brussels
Brussels , officially the Brussels Region or Brussels-Capital Region , is the capital of Belgium and the de facto capital of the European Union...
. He started to tour across Europe
Europe
Europe is, by convention, one of the world's seven continents. Comprising the westernmost peninsula of Eurasia, Europe is generally 'divided' from Asia to its east by the watershed divides of the Ural and Caucasus Mountains, the Ural River, the Caspian and Black Seas, and the waterways connecting...
dancing in Germany
Germany
Germany , officially the Federal Republic of Germany , is a federal parliamentary republic in Europe. The country consists of 16 states while the capital and largest city is Berlin. Germany covers an area of 357,021 km2 and has a largely temperate seasonal climate...
, Italy
Italy
Italy , officially the Italian Republic languages]] under the European Charter for Regional or Minority Languages. In each of these, Italy's official name is as follows:;;;;;;;;), is a unitary parliamentary republic in South-Central Europe. To the north it borders France, Switzerland, Austria and...
, England
England
England is a country that is part of the United Kingdom. It shares land borders with Scotland to the north and Wales to the west; the Irish Sea is to the north west, the Celtic Sea to the south west, with the North Sea to the east and the English Channel to the south separating it from continental...
, obtaining a lot of success. In particular, the London audience, who did not like at that time to see men dancing on stage, liked him very much. He was much appreciated for his tours and his jumps. He was able to gain applause in every theatre he danced, and this was not very common in the Romantic Era, where the only star on stage was the Ballerina
Ballerina
A ballerina is a title used to describe a principal female professional ballet dancer in a large company; the male equivalent to this title is danseur or ballerino...
dancing en pointe.

When in Vienna
Vienna
Vienna is the capital and largest city of the Republic of Austria and one of the nine states of Austria. Vienna is Austria's primary city, with a population of about 1.723 million , and is by far the largest city in Austria, as well as its cultural, economic, and political centre...
, Saint-Léon could dance for the first time with Fanny Cerrito
Fanny Cerrito
Fanny Cerrito, originally Francesca Cerrito , was an Italian ballet dancer and choreographer.Born in Naples, she studied under Carlo Blasis and the French choreographers Jules Perrot and Arthur Saint-Léon, to the latter of whom she was married from 1845–1851. Notable roles included Ondine and a...
and from that very moment the two of them became almost indivisible, till they got married in 1845. For Cerrito, Saint-Léon choreographed a ballet that was a hit in London La Vivandière (1843). He created also ballets for the Teatro La Fenice in Venice
Venice
Venice is a city in northern Italy which is renowned for the beauty of its setting, its architecture and its artworks. It is the capital of the Veneto region...
and for the Paris Opéra
Paris Opera
The Paris Opera is the primary opera company of Paris, France. It was founded in 1669 by Louis XIV as the Académie d'Opéra and shortly thereafter was placed under the leadership of Jean-Baptiste Lully and renamed the Académie Royale de Musique...
.

He became the teacher of the master class at the Opéra and he was in charge to choreograph the divertissements of the most important ballet production. He parted from his wife in 1851 and when she was invited to dance at the Opéra, Saint-Léon retired.

After touring across Europe, (he also worked three years for the Teatro San Carlos in Lisbon
Lisbon
Lisbon is the capital city and largest city of Portugal with a population of 545,245 within its administrative limits on a land area of . The urban area of Lisbon extends beyond the administrative city limits with a population of 3 million on an area of , making it the 9th most populous urban...
), he was invited to succeed Jules Perrot
Jules Perrot
Jules-Joseph Perrot was a dancer and choreographer who later became Balletmaster of the Imperial Ballet in St. Petersburg, Russia...
in 1859 as Maître de Ballet to the Imperial Bolshoi Kamenny Theatre, home of the Tsar
Tsar
Tsar is a title used to designate certain European Slavic monarchs or supreme rulers. As a system of government in the Tsardom of Russia and Russian Empire, it is known as Tsarist autocracy, or Tsarism...
's renowned Imperial Ballet
Mariinsky Ballet
The Mariinsky Ballet is a classical ballet company based at the Mariinsky Theatre in Saint Petersburg, Russia. Founded in the 18th century and originally known as the Imperial Russian Ballet, the Mariinsky Ballet is one of the world's leading ballet companies...
, in St. Petersburg, Russia
Russia
Russia or , officially known as both Russia and the Russian Federation , is a country in northern Eurasia. It is a federal semi-presidential republic, comprising 83 federal subjects...
, a post which he held until 1869 (he was succeed by Marius Petipa
Marius Petipa
Victor Marius Alphonse Petipa was a French ballet dancer, teacher and choreographer. Petipa is considered to be the most influential ballet master and choreographer of ballet that has ever lived....
).

Although Saint-Léon choreographed many ballets, the only one that has come down to us almost complete is Coppélia
Coppélia
Coppélia is a sentimental comic ballet with original choreography by Arthur Saint-Léon to a ballet libretto by Saint-Léon and Charles Nuitter and music by Léo Delibes. It was based upon two macabre stories by E. T. A. Hoffmann, Der Sandmann , and Die Puppe...
(1870). He died two days after the ballet's initial season had come to an untimely end because of the Franco-Prussian War
Franco-Prussian War
The Franco-Prussian War or Franco-German War, often referred to in France as the 1870 War was a conflict between the Second French Empire and the Kingdom of Prussia. Prussia was aided by the North German Confederation, of which it was a member, and the South German states of Baden, Württemberg and...
. In late November, the creator of Swanhilda, Giuseppina Bozzachi
Giuseppina Bozzachi
Giuseppina Bozzacchi was an Italian ballerina, noted for creating the role of Swanhilda in Léo Delibes' ballet Coppélia at the age of 16.Bozzacchi had come to Paris to study with Mme Dominique...
, died on her 17th birthday.

Saint-Léon is famous also because he invented a method of ballet notation described in the book: La Sténochoréographie, ou Art d'écrire promptement la danse published in 1852. It is the first method of choreographic notation which documented not only the feet but also the movements of the arms, torso and the head.

In 1848 Saint-Léon notated a Pas de Six from his 1846 ballet La Vivandière in La Sténochorégraphie. The notation was preserved in the archives of the Paris Opéra, and in 1975 the dance notation expert Ann Hutchinson-Guest and the Balletmaster Pierre Lacotte reconstructed Saint-Léon's choreography and Cesare Pugni
Cesare Pugni
Cesare Pugni was an Italian composer of ballet music, a pianist and a violinist. In his early career he composed operas, symphonies, and various other forms of orchestral music. Pugni is most noted for the ballets he composed while serving as Composer of the Ballet Music to Her Majesty's Theatre...
's music for the Joffrey Ballet
Joffrey Ballet
The Joffrey Ballet is a dance company in Chicago, Illinois, founded in 1956. From 1995 to 2004, the company was known as The Joffrey Ballet of Chicago. The company regularly performs classical ballets including Romeo & Juliet and The Nutcracker, while balancing those classics with pioneering modern...
. In 1978 Lacotte staged the Pas de Six for the Kirov/Mariinsky Ballet (the former Imperial Ballet), who still retain it in their repertory. The Pas de Six has since been staged by many ballet companies all over the world, and is known as either the La Vivandière Pas de Six, or the Markitenka Pas de Six (as it is known is Russia). The Pas de Six is the only known choreography of Saint-Léon's to have survived.