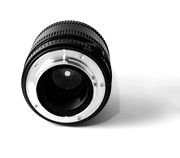 In optics
Optics
Optics is the branch of physics which involves the behavior and properties of light, including its interactions with matter and the construction of instruments that use or detect it. Optics usually describes the behavior of visible, ultraviolet, and infrared light...
, the exit pupil is a virtual aperture
Aperture
In optics, an aperture is a hole or an opening through which light travels. More specifically, the aperture of an optical system is the opening that determines the cone angle of a bundle of rays that come to a focus in the image plane. The aperture determines how collimated the admitted rays are,...
in an optical system. Only rays
Ray (optics)
In optics, a ray is an idealized narrow beam of light. Rays are used to model the propagation of light through an optical system, by dividing the real light field up into discrete rays that can be computationally propagated through the system by the techniques of ray tracing. This allows even very...
which pass through this virtual aperture can exit the system. The exit pupil is the image
Image
An image is an artifact, for example a two-dimensional picture, that has a similar appearance to some subject—usually a physical object or a person.-Characteristics:...
of the aperture stop in the optics that follow it. In a telescope
Optical telescope
An optical telescope is a telescope which is used to gather and focus light mainly from the visible part of the electromagnetic spectrum for directly viewing a magnified image for making a photograph, or collecting data through electronic image sensors....
or compound microscope, this image is the image of the objective
Objective (optics)
In an optical instrument, the objective is the optical element that gathers light from the object being observed and focuses the light rays to produce a real image. Objectives can be single lenses or mirrors, or combinations of several optical elements. They are used in microscopes, telescopes,...
element(s) as produced by the eyepiece
Eyepiece
An eyepiece, or ocular lens, is a type of lens that is attached to a variety of optical devices such as telescopes and microscopes. It is so named because it is usually the lens that is closest to the eye when someone looks through the device. The objective lens or mirror collects light and brings...
. The size and shape of this disc is crucial to the instrument's performance, because the observer's eye can see light only if it passes through this tiny aperture. The term exit pupil is also sometimes used to refer to the diameter
Diameter
In geometry, a diameter of a circle is any straight line segment that passes through the center of the circle and whose endpoints are on the circle. The diameters are the longest chords of the circle...
of the virtual aperture. Older literature on optics sometimes refers to the exit pupil as the Ramsden disc, named after English instrument-maker Jesse Ramsden
Jesse Ramsden
Jesse Ramsden FRSE was an English astronomical and scientific instrument maker.Ramsden was born at Salterhebble, Halifax, West Riding of Yorkshire, England. After serving his apprenticeship with a cloth-worker in Halifax, he went in 1755 to London, where in 1758 he was apprenticed to a...
.

To use an optical instrument, the entrance pupil
Entrance pupil
In an optical system, the entrance pupil is the optical image of the physical aperture stop, as 'seen' through the front of the lens system. The corresponding image of the aperture as seen through the back of the lens system is called the exit pupil...
of the viewer's eye
Eye
Eyes are organs that detect light and convert it into electro-chemical impulses in neurons. The simplest photoreceptors in conscious vision connect light to movement...
must be aligned with and be of similar size to the instrument's exit pupil. This properly couples the optical system to the eye and avoids vignetting
Vignetting
In photography and optics, vignetting  is a reduction of an image's brightness or saturation at the periphery compared to the image center. The word vignette, from the same root as vine, originally referred to a decorative border in a book. Later, the word came to be used for a photographic...
. (The entrance pupil of the eye is the image of the anatomical pupil
Pupil
The pupil is a hole located in the center of the iris of the eye that allows light to enter the retina. It appears black because most of the light entering the pupil is absorbed by the tissues inside the eye. In humans the pupil is round, but other species, such as some cats, have slit pupils. In...
as seen through the cornea
Cornea
The cornea is the transparent front part of the eye that covers the iris, pupil, and anterior chamber. Together with the lens, the cornea refracts light, with the cornea accounting for approximately two-thirds of the eye's total optical power. In humans, the refractive power of the cornea is...
.) The location of the exit pupil thus determines the eye relief
Eye relief
-Eye Relief and Exit Pupil:The eye relief of a telescope, a microscope, or binoculars is the distance from the last surface of an eyepiece at which the eye can obtain the full viewing angle. If a viewer's eye is outside this distance, a reduced field of view will be obtained...
of an eyepiece. Good eyepiece designs produce an exit pupil of diameter approximating the eye's apparent pupil diameter, and located about 20 mm away from the last surface of the eyepiece for the viewer's comfort. If the disc is larger than the eye's pupil, light will be lost instead of entering the eye; if smaller, the view will be vignetted. If the disc is too close to the last surface of the eyepiece, the eye will have to be uncomfortably close for viewing; if too far away, the observer will have difficulty maintaining the eye's alignment with the disc.

Since the eye's pupil varies in diameter with viewing conditions, the ideal exit pupil diameter depends on the application. An astronomical telescope requires a large pupil because it is designed to be used for looking at dim objects at night, while a microscope will require a much smaller pupil since the object will be brightly illuminated. A set of 7×50 binoculars
Binoculars
Binoculars, field glasses or binocular telescopes are a pair of identical or mirror-symmetrical telescopes mounted side-by-side and aligned to point accurately in the same direction, allowing the viewer to use both eyes when viewing distant objects...
has an exit pupil just over 7 mm, which corresponds to the average pupil size of a youthful dark-adapted human eye in circumstances with no extraneous light. The emergent light at the eyepiece then fills the eye's pupil, meaning no loss of brightness
Brightness
Brightness is an attribute of visual perception in which a source appears to be radiating or reflecting light. In other words, brightness is the perception elicited by the luminance of a visual target...
at night due to using such binoculars (assuming perfect transmission
Transmittance
In optics and spectroscopy, transmittance is the fraction of incident light at a specified wavelength that passes through a sample. A related term is absorptance, or absorption factor, which is the fraction of radiation absorbed by a sample at a specified wavelength...
). In daylight, when the eye's pupil is only 4 mm in diameter, over half the light will be blocked by the iris and will not reach the retina
Retina
The vertebrate retina is a light-sensitive tissue lining the inner surface of the eye. The optics of the eye create an image of the visual world on the retina, which serves much the same function as the film in a camera. Light striking the retina initiates a cascade of chemical and electrical...
. However, the loss of light in the daytime is generally not significant since there is so much light to start with. By contrast, 8×32 binoculars, often sold with emphasis on their compactness, have an exit pupil of only 4 mm. That is sufficient to fill a typical daytime eye pupil, making these binoculars better suited to daytime than night-time use. The maximum pupil size of a human eye is typically 5–9 mm for individuals below 25 years old, and decreases slowly with age after that.

The optimum eye relief distance also varies with application. For example a rifle scope needs a very long eye relief to prevent recoil from causing it to strike the observer.

The exit pupil can be visualized by focusing the instrument on a bright, nondescript field, and holding a white card up to the eyepiece. This projects a disc of light onto the card. By moving the card closer to or further away from the eyepiece, the disc of light will be minimized when the card is at the exit pupil, and the bright disc then shows the diameter of the pupil. A clear vial of milky fluid can also be used to visualize the light rays, which appear as an hourglass shape converging and diverging as they exit the eyepiece, with the smallest cross-section (the waist of the hourglass shape) representing the exit pupil.

In the case of binoculars however, the two eyepieces are usually permanently attached, and the magnification and objective diameter (in mm) is typically written on the binoculars in the form, e.g., 7x50. In that case, the exit pupil can be easily calculated as the diameter of the objective lens divided by the magnification
Magnification
Magnification is the process of enlarging something only in appearance, not in physical size. This enlargement is quantified by a calculated number also called "magnification"...
. The two formulas are of course equivalent and it is simply a matter of which information one starts with as to which formula to use.

The concept of exit pupil is not often discussed in analog photography, but has become increasingly important in digital imaging. The distance of the exit pupil from the sensor plane determines the range of angles of incidence
Angle of incidence
Angle of incidence is a measure of deviation of something from "straight on", for example:* in the approach of a ray to a surface, or* the angle at which the wing or horizontal tail of an airplane is installed on the fuselage, measured relative to the axis of the fuselage.-Optics:In geometric...
that light will make with the sensor. Image sensor
Image sensor
An image sensor is a device that converts an optical image into an electronic signal. It is used mostly in digital cameras and other imaging devices...
s often have a limited range of angles over which they will efficiently accept light, especially those that use microlens
Microlens
A microlens is a small lens, generally with a diameter less than a millimetre and often as small as 10 micrometres . The small sizes of the lenses means that a simple design can give good optical quality but sometimes unwanted effects arise due to optical diffraction at the small features...
es to increase their sensitivity. The closer the exit pupil to the focal plane, the higher the angles of incidence at the extreme edges of the field. This can lead to pixel vignetting. For this reason, many small digital cameras (such as those found in cell phones) are image-space telecentric.