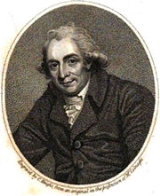 Encyclopedia
Jesse Ramsden FRSE  was an English
England
England is a country that is part of the United Kingdom. It shares land borders with Scotland to the north and Wales to the west; the Irish Sea is to the north west, the Celtic Sea to the south west, with the North Sea to the east and the English Channel to the south separating it from continental...
astronomical
Astronomy
Astronomy is a natural science that deals with the study of celestial objects and phenomena that originate outside the atmosphere of Earth...
and scientific instrument maker.

Ramsden was born at Salterhebble
Salterhebble
Salterhebble is an area of Halifax, a town within the Metropolitan Borough of Calderdale, in West Yorkshire, England. Salterhebble is located where the Hebble Brook flows into the River Calder...
, Halifax
Halifax, West Yorkshire
Halifax is a minster town, within the Metropolitan Borough of Calderdale in West Yorkshire, England. It has an urban area population of 82,056 in the 2001 Census. It is well-known as a centre of England's woollen manufacture from the 15th century onward, originally dealing through the Halifax Piece...
, West Riding of Yorkshire, England. After serving his apprenticeship with a cloth-worker in Halifax, he went in 1755 to London
London
London is the capital city of :England and the :United Kingdom, the largest metropolitan area in the United Kingdom, and the largest urban zone in the European Union by most measures. Located on the River Thames, London has been a major settlement for two millennia, its history going back to its...
, where in 1758 he was apprenticed to a mathematical instrument
Mathematical instrument
A mathematical instrument is a tool or device used in the study or practice of mathematics.Most instruments are used within the field of geometry, including the ruler, dividers, protractor, set square, compass, ellipsograph and opisometer...
maker. About four years afterwards he started business on his own account and secured a great reputation with his products.

Ramsden created one of the first high-quality dividing engine
Dividing engine
A dividing engine is a device specifically employed to mark graduations on measuring instruments.-History:There has always been a need for accurate measuring instruments...
s. This led to his speciality in dividing circles, which began to supersede the quadrants in observatories towards the end of the 18th century. His most celebrated work was a 5-feet vertical circle, which was finished in 1789 and was used by Giuseppe Piazzi
Giuseppe Piazzi
Giuseppe Piazzi was an Italian Catholic priest of the Theatine order, mathematician, and astronomer. He was born in Ponte in Valtellina, and died in Naples. He established an observatory at Palermo, now the Osservatorio Astronomico di Palermo – Giuseppe S...
at Palermo
Palermo
Palermo is a city in Southern Italy, the capital of both the autonomous region of Sicily and the Province of Palermo. The city is noted for its history, culture, architecture and gastronomy, playing an important role throughout much of its existence; it is over 2,700 years old...
in constructing his catalogue of stars. He was the first to carry out in practice a method of reading off angles (first suggested in 1768 by the Duke of Chaulnes
Chaulnes
Chaulnes is a commune in the Somme department in Picardy in northern France.-Demography:-Culture:Chaulnes is noted for its cultural events, especially the heavy metal music festival "Killer Fest"...
) by measuring the distance of the index from the nearest division line by means of a micrometer screw which moves one or two fine threads placed in the focus of a microscope.

Ramsden's transit instruments were the first which were illuminated through the hollow axis; the idea was suggested to him by Prof. Henry Ussher
Henry Ussher
Henry Ussher was an Irish Protestant churchman, a founder of Trinity College, Dublin and Church of Ireland Archbishop of Armagh.-Life:...
in Dublin. He published a Description of an Engine for dividing Mathematical Instruments in 1777.

Ramsden is also responsible for the achromatic
Achromatic lens
An achromatic lens or achromat is a lens that is designed to limit the effects of chromatic and spherical aberration. Achromatic lenses are corrected to bring two wavelengths into focus in the same plane....
eyepiece
Eyepiece
An eyepiece, or ocular lens, is a type of lens that is attached to a variety of optical devices such as telescopes and microscopes. It is so named because it is usually the lens that is closest to the eye when someone looks through the device. The objective lens or mirror collects light and brings...
named after him, and also worked on new designs of electrostatic generator
Electrostatic generator
An electrostatic generator, or electrostatic machine, is a mechanical device that produces static electricity, or electricity at high voltage and low continuous current...
s. He was elected to the Royal Society
Royal Society
The Royal Society of London for Improving Natural Knowledge, known simply as the Royal Society, is a learned society for science, and is possibly the oldest such society in existence. Founded in November 1660, it was granted a Royal Charter by King Charles II as the "Royal Society of London"...
in 1786. The exit pupil
Exit pupil
In optics, the exit pupil is a virtual aperture in an optical system. Only rays which pass through this virtual aperture can exit the system. The exit pupil is the image of the aperture stop in the optics that follow it. In a telescope or compound microscope, this image is the image of the...
of an eyepiece was once called the Ramsden disc in his honour. In 1791 he completed the Shuckburgh telescope
Shuckburgh telescope
The Shuckburgh telescope or Shuckburgh equatorial refracting telescope was a 4.1 inch diameter aperture telescope on a equatorial mount completed in 1791 for Sir George Shuckburgh in Warwickshire, England, and built by British instrument maker Jesse Ramsden . It was transferred to Royal...
, an equatorial mounted refractor telescope.

In about 1785, Ramsden provided a new large theodolite
Ramsden theodolite
The Ramsden theodolite is a large theodolite that was specially constructed for use in the first Ordnance Survey of Southern Britain. It was also known as the Great or 36 inch theodolite....
for General William Roy
William Roy
Major-General William Roy FRS was a Scottish military engineer, surveyor, and antiquarian. He was an innovator who applied new scientific discoveries and newly emerging technologies to the accurate geodetic mapping of Great Britain....
of the Royal Engineers
Royal Engineers
The Corps of Royal Engineers, usually just called the Royal Engineers , and commonly known as the Sappers, is one of the corps of the British Army....
, which was used for a new survey of the distance between Greenwich, London and Paris. This work provided the basis for the subsequent Ordnance Survey
Ordnance Survey
Ordnance Survey , an executive agency and non-ministerial government department of the Government of the United Kingdom, is the national mapping agency for Great Britain, producing maps of Great Britain , and one of the world's largest producers of maps.The name reflects its creation together with...
of the counties of Britain. For his part with Roy in this work he received the Copley Medal
Copley Medal
The Copley Medal is an award given by the Royal Society of London for "outstanding achievements in research in any branch of science, and alternates between the physical sciences and the biological sciences"...
in 1795. He died five years later at Brighton
Brighton
Brighton is the major part of the city of Brighton and Hove in East Sussex, England on the south coast of Great Britain...
, England.

The 28 July 1827 edition of The Mirror of Literature, Amusement, and Instruction, Vol. 10, Issue 266, contained the following short memoir: