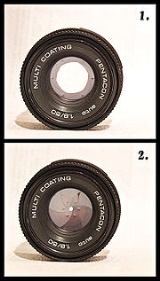 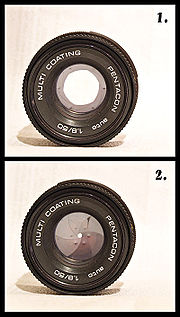 In an optical
Optics
Optics is the branch of physics which involves the behavior and properties of light, including its interactions with matter and the construction of instruments that use or detect it. Optics usually describes the behavior of visible, ultraviolet, and infrared light...
system, the entrance pupil is the optical image of the physical aperture stop, as 'seen' through the front of the lens system. The corresponding image of the aperture as seen through the back of the lens system is called the exit pupil
Exit pupil
In optics, the exit pupil is a virtual aperture in an optical system. Only rays which pass through this virtual aperture can exit the system. The exit pupil is the image of the aperture stop in the optics that follow it. In a telescope or compound microscope, this image is the image of the...
. If there is no lens in front of the aperture (as in a pinhole camera
Pinhole camera
A pinhole camera is a simple camera without a lens and with a single small aperture – effectively a light-proof box with a small hole in one side. Light from a scene passes through this single point and projects an inverted image on the opposite side of the box...
), the entrance pupil's location and size are identical to those of the aperture. Optical elements in front of the aperture will produce a magnified
Magnification
Magnification is the process of enlarging something only in appearance, not in physical size. This enlargement is quantified by a calculated number also called "magnification"...
or minified image that is displaced from the location of the physical aperture. The entrance pupil is usually a virtual image
Virtual image
In optics, a virtual image is an image in which the outgoing rays from a point on the object always diverge. It will appear to converge in or behind the optical device . A simple example is a flat mirror where the image of oneself is perceived at twice the distance from oneself to the mirror...
: it lies behind the first optical surface of the system.

The geometric location of the entrance pupil is the vertex of the camera's angle of view
Angle of view
In photography, angle of view describes the angular extent of a given scene that is imaged by a camera. It is used interchangeably with the more general term field of view....
and consequently its center of perspective, perspective point, view point, projection centre or no-parallax point. This point is important in panoramic photography
Panoramic photography
Panoramic photography is a technique of photography, using specialized equipment or software, that captures images with elongated fields of view. It is sometimes known as wide format photography. The term has also been applied to a photograph that is cropped to a relatively wide aspect ratio...
, because the camera must be rotated around it in order to avoid parallax
Parallax
Parallax is a displacement or difference in the apparent position of an object viewed along two different lines of sight, and is measured by the angle or semi-angle of inclination between those two lines. The term is derived from the Greek παράλλαξις , meaning "alteration"...
errors in the final, stitched
Image stitching
Image stitching or photo stitching is the process of combining multiple photographic images with overlapping fields of view to produce a segmented panorama or high-resolution image. Commonly performed through the use of computer software, most approaches to image stitching require nearly exact...
panorama. Depending on the lens design, the entrance pupil location on the optical axis may be behind, within or in front of the lens system; and even at infinite distance from the lens in the case of telecentric systems.

The entrance pupil of the human eye
Eye
Eyes are organs that detect light and convert it into electro-chemical impulses in neurons. The simplest photoreceptors in conscious vision connect light to movement...
, which is not quite the same as the physical pupil
Pupil
The pupil is a hole located in the center of the iris of the eye that allows light to enter the retina. It appears black because most of the light entering the pupil is absorbed by the tissues inside the eye. In humans the pupil is round, but other species, such as some cats, have slit pupils. In...
, is typically about 4 mm in diameter. It can range from 2 mm in a very brightly lit place to 8 mm in the dark.