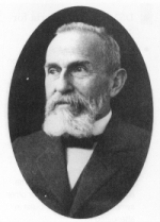 Encyclopedia
Paul Eugen Bleuler was a Swiss psychiatrist
Psychiatry
Psychiatry is the medical specialty devoted to the study and treatment of mental disorders. These mental disorders include various affective, behavioural, cognitive and perceptual abnormalities...
most notable for his contributions to the understanding of mental illness and for coining the term "schizophrenia
Schizophrenia
Schizophrenia is a mental disorder characterized by a disintegration of thought processes and of emotional responsiveness. It most commonly manifests itself as auditory hallucinations, paranoid or bizarre delusions, or disorganized speech and thinking, and it is accompanied by significant social...
."

Bleuler was born in Zollikon
Zollikon
Zollikon is a municipality in the district of Meilen in the canton of Zürich in Switzerland.-Geography:Zollikon has an area of . Of this area, 21.2% is used for agricultural purposes, while 37.7% is forested. Of the rest of the land, 40.8% is settled and the remainder is non-productive...
, a small town near Zürich
Zürich
Zurich is the largest city in Switzerland and the capital of the canton of Zurich. It is located in central Switzerland at the northwestern tip of Lake Zurich...
in Switzerland
Switzerland
Switzerland name of one of the Swiss cantons. ; ; ; or ), in its full name the Swiss Confederation , is a federal republic consisting of 26 cantons, with Bern as the seat of the federal authorities. The country is situated in Western Europe,Or Central Europe depending on the definition....
, to Johann Rudolf Bleuler, a wealthy farmer, and Pauline Bleuler-Bleuler. He studied medicine
Medicine
Medicine is the science and art of healing. It encompasses a variety of health care practices evolved to maintain and restore health by the prevention and treatment of illness....
in Zürich and following his graduation in 1881 he worked as a medial assistant to Gottlieb Burckhardt
Gottlieb Burckhardt
Johann Gottlieb Burckhardt was a Swiss psychiatrist and the medical director of small mental hospital in the Swiss canton of Neuchâtel. He is commonly regarded as having performed the first modern psychosurgical operation...
at the Waldau Psychiatric Clinic in Bern. Leaving this post in 1884 he spent one year on medical study trips to Jean-Martin Charcot
Jean-Martin Charcot
Jean-Martin Charcot was a French neurologist and professor of anatomical pathology. He is known as "the founder of modern neurology" and is "associated with at least 15 medical eponyms", including Charcot-Marie-Tooth disease and amyotrophic lateral sclerosis...
in Paris
Paris
Paris is the capital and largest city in France, situated on the river Seine, in northern France, at the heart of the Île-de-France region...
, to Bernhard von Gudden
Bernhard von Gudden
Johann Bernhard Aloys von Gudden was a German neuroanatomist and psychiatrist born in Kleve.In 1848 he earned his doctorate from the University of Halle, and became an intern at the asylum in Siegburg under Carl Wigand Maximilian Jacobi...
in Munich
Munich
Munich The city's motto is "" . Before 2006, it was "Weltstadt mit Herz" . Its native name, , is derived from the Old High German Munichen, meaning "by the monks' place". The city's name derives from the monks of the Benedictine order who founded the city; hence the monk depicted on the city's coat...
and to London
London
London is the capital city of :England and the :United Kingdom, the largest metropolitan area in the United Kingdom, and the largest urban zone in the European Union by most measures. Located on the River Thames, London has been a major settlement for two millennia, its history going back to its...
. Thereafter he returned to Zürich to take a post as an intern at the Burghölzli
Burghölzli
Burghölzli is the common name given for the psychiatric hospital of the University of Zürich, Switzerland. The hospital is located on "Burghölzli", a wooded hill in the district of Riesbach of southeastern Zürich....
, a university hospital.

In 1886 Bleuler became the director of a psychiatric clinic at Rheinau
Rheinau, Switzerland
Rheinau is a municipality in the district of Andelfingen in the Canton of Zürich in Switzerland. It is located at a bend of the Rhine River which forms the Swiss-German border in this area. A bridge links Rheinau to Altenburg, in Jestetten municipality, Baden-Wurttemberg state.-Geography:Rheinau...
, a hospital located in an old monastery on an island in the Rhine. It was noted at the time for being backward, and Bleuler set about improving conditions for the patients resident there.

Bleuler returned to the Burghölzli
Burghölzli
Burghölzli is the common name given for the psychiatric hospital of the University of Zürich, Switzerland. The hospital is located on "Burghölzli", a wooded hill in the district of Riesbach of southeastern Zürich....
in 1898 where he was appointed director.

Bleuler is also recognized today for having a neurological condition called synesthesia
Synesthesia
Synesthesia , from the ancient Greek , "together," and , "sensation," is a neurologically based condition in which stimulation of one sensory or cognitive pathway leads to automatic, involuntary experiences in a second sensory or cognitive pathway...
, in which information from the sensory systems crosses over with the result that an individual experiences one sensation as another tasting colours, hearing numbers or seeing music, for example.