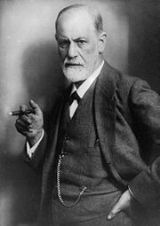 Overview
Sigmund Freud (ˈziːkmʊnt ˈfʁɔʏt), born Sigismund Schlomo Freud (6 May 1856 – 23 September 1939), was an Austrian
Austrians
Austrians are a nation and ethnic group, consisting of the population of the Republic of Austria and its historical predecessor states who share a common Austrian culture and Austrian descent....
neurologist
Neurologist
A neurologist is a physician who specializes in neurology, and is trained to investigate, or diagnose and treat neurological disorders.Neurology is the medical specialty related to the human nervous system. The nervous system encompasses the brain, spinal cord, and peripheral nerves. A specialist...
who founded the discipline of psychoanalysis
Psychoanalysis
Psychoanalysis is a psychological theory developed in the late 19th and early 20th centuries by Austrian neurologist Sigmund Freud. Psychoanalysis has expanded, been criticized and developed in different directions, mostly by some of Freud's former students, such as Alfred Adler and Carl Gustav...
. An early neurological researcher into cerebral palsy
Cerebral palsy
Cerebral palsy is an umbrella term encompassing a group of non-progressive, non-contagious motor conditions that cause physical disability in human development, chiefly in the various areas of body movement....
, aphasia and microscopic neuroanatomy, Freud later developed theories about the unconscious mind
Unconscious mind
The unconscious mind is a term coined by the 18th century German romantic philosopher Friedrich Schelling and later introduced into English by the poet and essayist Samuel Taylor Coleridge...
and the mechanism of repression
Psychological repression
Psychological repression, also psychic repression or simply repression, is the psychological attempt by an individual to repel one's own desires and impulses towards pleasurable instincts by excluding the desire from one's consciousness and holding or subduing it in the unconscious...
, and established the field of verbal psychotherapy by creating psychoanalysis, a clinical method for treating psychopathology
Psychopathology
Psychopathology is the study of mental illness, mental distress, and abnormal/maladaptive behavior. The term is most commonly used within psychiatry where pathology refers to disease processes...
through dialogue between a patient (or "analysand") and a psychoanalyst.

What are the two major contributions of freud which are still acceptable to the field of psychology.
More

What previous established techniques and theories did he add to?

What were Sigmund Fried

Was there a catalyst for his interest in psychology?

What did Sigmund take up before psychology?
More

Woe to you, my Princess, when I come... you shall see who is the stronger, a gentle girl who doesn't eat enough or a big wild man who has cocaine in his body.

I do not doubt that it would be easier for fate to take away your suffering than it would for me. But you will see for yourself that much has been gained if we succeed in turning your hysterical misery into common unhappiness.

Being entirely honest with oneself is a good exercise.

I do not in the least underestimate bisexuality. . . I expect it to provide all further enlightenment.

And now, the main thing! As far as I can see, my next work will be called "Human Bisexuality." It will go to the root of the problem and say the last word it may be granted to say — the last and the most profound.

No one who, like me, conjures up the most evil of those half-tamed demons that inhabit the human beast, and seeks to wrestle with them, can expect to come through the struggle unscathed.

Conscience is the internal perception of the rejection of a particular wish operating within us.

At bottom God is nothing more than an exalted father.

He that has eyes to see and ears to hear may convince himself that no mortal can keep a secret. If his lips are silent, he chatters with his fingertips; betrayal oozes out of him at every pore.