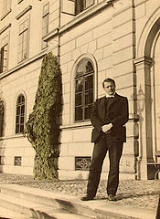 Overview
Carl Gustav Jung (ˈkarl ˈɡʊstaf ˈjʊŋ; 26 July 1875 – 6 June 1961) was a Swiss
Swiss (people)
The Swiss are citizens or natives of Switzerland. The demonym derives from the toponym of Schwyz and has been in widespread use to refer to the Old Swiss Confederacy since the 16th century....
psychiatrist
Psychiatrist
A psychiatrist is a physician who specializes in the diagnosis and treatment of mental disorders. All psychiatrists are trained in diagnostic evaluation and in psychotherapy...
and the founder of Analytical Psychology
Analytical psychology
Analytical psychology is the school of psychology originating from the ideas of Swiss psychiatrist Carl Jung. His theoretical orientation has been advanced by his students and other thinkers who followed in his tradition. Though they share similarities, analytical psychology is distinct from...
. Jung is considered the first modern psychiatrist to view the human psyche as "by nature religious" and make it the focus of exploration. Jung is one of the best known researchers in the field of dream analysis and symbolization. While he was a fully involved and practicing clinician, much of his life's work was spent exploring tangential areas, including Eastern and Western philosophy, alchemy
Alchemy
Alchemy is an influential philosophical tradition whose early practitioners’ claims to profound powers were known from antiquity. The defining objectives of alchemy are varied; these include the creation of the fabled philosopher's stone possessing powers including the capability of turning base...
, astrology
Astrology
Astrology consists of a number of belief systems which hold that there is a relationship between astronomical phenomena and events in the human world...
, and sociology
Sociology
Sociology is the study of society. It is a social science—a term with which it is sometimes synonymous—which uses various methods of empirical investigation and critical analysis to develop a body of knowledge about human social activity...
, as well as literature
Literature
Literature is the art of written works, and is not bound to published sources...
and the arts.

Jung considered individuation
Individuation
Individuation is a concept which appears in numerous fields and may be encountered in work by Arthur Schopenhauer, Carl Jung, Gilbert Simondon, Bernard Stiegler, Gilles Deleuze, Henri Bergson, David Bohm, and Manuel De Landa...
, a psychological process of integrating the opposites including the conscious with the unconscious while still maintaining their relative autonomy, necessary for a person to become whole.

What are the major facets of Carl Jung's analytical psychology?

Does anyone know in which works Jung discusses Adam Kadmon? There seems to be an extensive section in Mysterium Coniunctionis. Is anything else out th...

Does Carl Jung and Jackson Pollock share anything unique qualites? If so, what are they?

The Collective Unconscious and Active Imagination

Please help me with suggestions in identifying the prominent archetypes here ?????

How did Jung and Freud influence one another?

What was Jung's response to Nazism?

IS THERE ANYONE CURRENLY DUING JUNG THERAPY??
More

The little world of childhood with its familiar surroundings is a model of the greater world. The more intensively the family has stamped its character upon the child, the more it will tend to feel and see its earlier miniature world again in the bigger world of adult life. Naturally this is not a conscious, intellectual process.

The Theory of Psychoanalysis (1913)

This whole creation is essentially subjective, and the dream is the theater where the dreamer is at once scene, actor, prompter, stage manager, author, audience, and critic.

The dream is the small hidden door in the deepest and most intimate sanctum of the soul, which opens to that primeval cosmic night that was soul long before there was conscious ego and will be soul far beyond what a conscious ego could ever reach.

The Meaning of Psychology for Modern Man (1934)

Emotion is the chief source of all becoming-conscious. There can be no transforming of darkness into light and of apathy into movement without emotion.

Psychological Aspects of the Modern Archetype (1938)

No nation keeps its word. A nation is a big, blind worm, following what? Fate perhaps. A nation has no honour, it has no word to keep. ... Hitler is himself the nation. That incidentally is why Hitler always has to talk so loud, even in private conversation — because he is speaking with 78 million voices.

No one can flatter himself that he is immune to the spirit of his own epoch, or even that he possesses a full understanding of it. Irrespective of our conscious convictions, each one of us, without exception, being a particle of the general mass, is somewhere attached to, colored by, or even undermined by the spirit which goes through the mass. Freedom stretches only as far as the limits of our consciousness.

The unconscious is not just evil by nature, it is also the source of the highest good: not only dark but also light, not only bestial, semihuman, and demonic but superhuman, spiritual, and, in the classical sense of the word, "divine."

Our blight is ideologies — they are the long-expected Antichrist!

The Tibetan Book of the Great Liberation (1954)
More
x