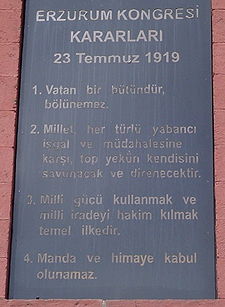 Erzurum Congress was an assembly of Turkish Revolutionaries held from 23 July to 4 August 1919 in the city of Erzurum
Erzurum
Erzurum is a city in Turkey. It is the largest city, the capital of Erzurum Province. The city is situated 1757 meters above sea level. Erzurum had a population of 361,235 in the 2000 census. .Erzurum, known as "The Rock" in NATO code, served as NATO's southeastern-most air force post during the...
, in eastern Turkey
Turkey
Turkey , known officially as the Republic of Turkey , is a Eurasian country located in Western Asia and in East Thrace in Southeastern Europe...
, in accordance with the previously issued Amasya Circular
Amasya Circular
Amasya Circular was a joint circular issued on 22 June 1919 in Amasya by Fahri Yaver-i Hazret-i Şehriyari Mirliva Mustafa Kemal Pasha , Hüseyin Rauf Bey , Miralay Refet Bey and Mirliva Ali Fuad Pasha...
. The congress united delegates from six eastern provinces (vilayet) of the Ottoman Empire
Ottoman Empire
The Ottoman EmpireIt was usually referred to as the "Ottoman Empire", the "Turkish Empire", the "Ottoman Caliphate" or more commonly "Turkey" by its contemporaries...
, many parts of which were under Allied
Allies of World War I
The Entente Powers were the countries at war with the Central Powers during World War I. The members of the Triple Entente were the United Kingdom, France, and the Russian Empire; Italy entered the war on their side in 1915...
occupation at the time.

Fifty-six delegates from the vilayets of Diarbekir, Bitlis
Bitlis
Bitlis is a town in eastern Turkey and the capital of Bitlis Province. The town is located at an elevation of 1,400 metres, 15 km from Lake Van, in the steep-sided valley of the Bitlis River, a tributary of the Tigris. The local economy is mainly based on agricultural products which include...
, Erzurum
Erzurum
Erzurum is a city in Turkey. It is the largest city, the capital of Erzurum Province. The city is situated 1757 meters above sea level. Erzurum had a population of 361,235 in the 2000 census. .Erzurum, known as "The Rock" in NATO code, served as NATO's southeastern-most air force post during the...
, Sivas, Trabzon
Trabzon
Trabzon is a city on the Black Sea coast of north-eastern Turkey and the capital of Trabzon Province. Trabzon, located on the historical Silk Road, became a melting pot of religions, languages and culture for centuries and a trade gateway to Iran in the southeast and the Caucasus to the northeast...
and Van
Van, Turkey
Van is a city in southeastern Turkey and the seat of the Kurdish-majority Van Province, and is located on the eastern shore of Lake Van. The city's official population in 2010 was 367,419, but many estimates put this as much higher with a 1996 estimate stating 500,000 and former Mayor Burhan...
gathered in Erzurum for the congress held under the auspices of Mustafa Kemal Pasha and Kazım Karabekir
Kazim Karabekir
Musa Kâzım Karabekir was a Turkish general and politician. He was commander of the Eastern Army in the Ottoman Empire at the end of World War I and served as Speaker of the Grand National Assembly of Turkey before his death.-Early years:Karabekir was born in 1882 as the son of an Ottoman General,...
Pasha and took a number of initial but important decisions that were to shape the future conduct of the Turkish War of Independence
Turkish War of Independence
The Turkish War of Independence was a war of independence waged by Turkish nationalists against the Allies, after the country was partitioned by the Allies following the Ottoman Empire's defeat in World War I...
. Namely, it reaffirmed the provinces' desire to remain within the Ottoman Empire (rather than be partitioned by the Allies); refused to accept any mandate scheme for the empire nor accord Christian elements such as Greeks
Greeks
The Greeks, also known as the Hellenes , are a nation and ethnic group native to Greece, Cyprus and neighboring regions. They also form a significant diaspora, with Greek communities established around the world....
or Armenians
Armenians
Armenian people or Armenians are a nation and ethnic group native to the Armenian Highland.The largest concentration is in Armenia having a nearly-homogeneous population with 97.9% or 3,145,354 being ethnic Armenian....
with any special privileges; and resolved to resist any such measures, should they try to be implemented., Before dispersing, the congress elected members for a "representative committee" (heyet-i temsiliye), with Kemal as its head.

The language of the resolutions was as follows::