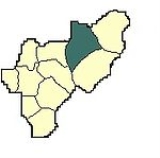 Encyclopedia
Erndtebrück is a municipality in the Siegen-Wittgenstein
Siegen-Wittgenstein
Siegen-Wittgenstein is a Kreis in the southeast of North Rhine-Westphalia, Germany. Neighboring districts are Olpe, Hochsauerlandkreis, Waldeck-Frankenberg, Marburg-Biedenkopf, Lahn-Dill, Westerwaldkreis, Altenkirchen.-History:...
district, in North Rhine-Westphalia
North Rhine-Westphalia
North Rhine-Westphalia is the most populous state of Germany, with four of the country's ten largest cities. The state was formed in 1946 as a merger of the northern Rhineland and Westphalia, both formerly part of Prussia. Its capital is Düsseldorf. The state is currently run by a coalition of the...
, Germany
Germany
Germany , officially the Federal Republic of Germany , is a federal parliamentary republic in Europe. The country consists of 16 states while the capital and largest city is Berlin. Germany covers an area of 357,021 km2 and has a largely temperate seasonal climate...
.

Erndtebrück situated on the river Eder
Eder
The Eder is a 177 km long river in Germany, and a tributary of the Fulda River. It was first mentioned by the Roman historian Tacitus as the Adrana in the territory of the Chatti....
in the Rothaargebirge
Rothaargebirge
The Rothaargebirge is a low mountain range reaching heights of up to 843.1 m in North Rhine-Westphalia and Hesse, Germany....
, approx. 20 km northeast of Siegen
Siegen
Siegen is a city in Germany, in the south Westphalian part of North Rhine-Westphalia.It is located in the district of Siegen-Wittgenstein in the Arnsberg region...
. 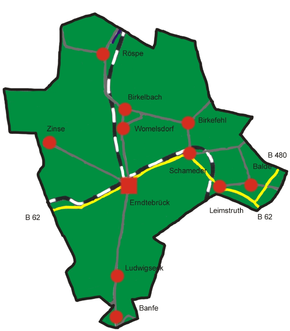 Erndtebrück had its first documentary mention in 1256, celebrating 750 years of existence in 2006. The village was first known by the name Ermingardibruggern, and was the seat of a knightly family, and later a customs office with market rights.

The council's 22 seats are apportioned thus, in accordance with municipal elections held on 30 August 2009:
Note: UWG is a citizens' coalition.

Since the municipal elections in 2004, Karl-Ludwig Völkel (SPD) has been Erndtebrück's directly elected mayor.

Erndtebrück's civic coat of arms
Coat of arms
A coat of arms is a unique heraldic design on a shield or escutcheon or on a surcoat or tabard used to cover and protect armour and to identify the wearer. Thus the term is often stated as "coat-armour", because it was anciently displayed on the front of a coat of cloth...
might heraldically be described thus: Party per fess, above in azure a bridge Or, below in argent two pallets sable.

The community was granted these arms in 1958. The bridge in the chief is a canting
Canting arms
Canting arms are heraldic bearings that represent the bearer's name in a visual pun or rebus. The term cant came into the English language from Anglo-Norman cant, meaning song or singing, from Latin cantāre, and English cognates include canticle, chant, accent, incantation and recant.Canting arms –...
symbol, referring to Erndtebrück's last syllable (Brücke is "bridge" in German
German language
German is a West Germanic language, related to and classified alongside English and Dutch. With an estimated 90 – 98 million native speakers, German is one of the world's major languages and is the most widely-spoken first language in the European Union....
), but also to an actual bridge built over the river Eder
Eder
The Eder is a 177 km long river in Germany, and a tributary of the Fulda River. It was first mentioned by the Roman historian Tacitus as the Adrana in the territory of the Chatti....
at Erndtebrück in 1830. Below in the shield are the arms of the Counts of Wittgenstein.http://www.ngw.nl/int/dld/e/erndtebr.htm

The community is connected to its neighbours by Federal Highways (Bundesstraßen) 62 and 480. Furthermore, train
Train
A train is a connected series of vehicles for rail transport that move along a track to transport cargo or passengers from one place to another place. The track usually consists of two rails, but might also be a monorail or maglev guideway.Propulsion for the train is provided by a separate...
s run on the Rothaar Railway
Rothaar Railway
The Rothaar Railway is a 48 km long German branch line running from Kreuztal on the Ruhr–Sieg line to Bad Berleburg via Erndtebrück with a through connexion to Siegen...
to both Siegen
Siegen
Siegen is a city in Germany, in the south Westphalian part of North Rhine-Westphalia.It is located in the district of Siegen-Wittgenstein in the Arnsberg region...
and Bad Berleburg
Bad Berleburg
Bad Berleburg is a town, in the district of Siegen-Wittgenstein, in North Rhine-Westphalia, Germany. It is one of Germany's largest towns by land area. It is located approx...
, and on the Upper Lahn Valley (Obere Lahntalbahn) to Marburg
Marburg
Marburg is a city in the state of Hesse, Germany, on the River Lahn. It is the main town of the Marburg-Biedenkopf district and its population, as of March 2010, was 79,911.- Founding and early history :...
. Until 1944, there was also a rail connection to Altenhundem with the Erndtebrück-Altenhundem line, but this came to an end late in the Second World War as retreating German Army units blew its bridges up. Some of the tunnels along the line are still preserved.


Sons and daughters of the community