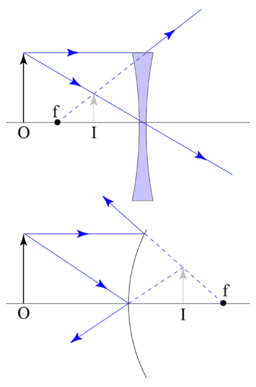 In optics
Optics
Optics is the branch of physics which involves the behavior and properties of light, including its interactions with matter and the construction of instruments that use or detect it. Optics usually describes the behavior of visible, ultraviolet, and infrared light...
, a virtual image is an image in which the outgoing rays
Ray (optics)
In optics, a ray is an idealized narrow beam of light. Rays are used to model the propagation of light through an optical system, by dividing the real light field up into discrete rays that can be computationally propagated through the system by the techniques of ray tracing. This allows even very...
from a point on the object always diverge. It will appear to converge in or behind the optical device (i.e., a mirror). A simple example is a flat mirror
Plane mirror
A plane mirror is a mirror with a plane reflective surface.For light rays striking a plane mirror, the angle of reflection equals the angle of incidence...
where the image of oneself is perceived at twice the distance from oneself to the mirror. That is, if one is half a meter in front of the mirror, one's image will appear to be at a distance of 1 meter away (or half a meter inside or behind the mirror). Because the rays never really converge, one cannot project a virtual image.

By contrast, a real image
Real image
In optics, a real image is a representation of an object in which the perceived location is actually a point of convergence of the rays of light that make up the image. If a screen is placed in the plane of a real image the image will generally become visible on the screen...
is an image in which the outgoing rays from a point on the object pass through a single point. It is easiest to observe real images when projected on an opaque screen. A screen is not necessary for the image to form.