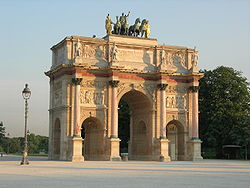 The Empire style, ɑ̃.piːʁ, sometimes considered the second phase of Neoclassicism
Neoclassicism
Neoclassicism is the name given to Western movements in the decorative and visual arts, literature, theatre, music, and architecture that draw inspiration from the "classical" art and culture of Ancient Greece or Ancient Rome...
, is an early-19th-century design
Design
Design as a noun informally refers to a plan or convention for the construction of an object or a system while “to design” refers to making this plan...
movement in architecture
Architecture
Architecture is both the process and product of planning, designing and construction. Architectural works, in the material form of buildings, are often perceived as cultural and political symbols and as works of art...
, furniture
Furniture
Furniture is the mass noun for the movable objects intended to support various human activities such as seating and sleeping in beds, to hold objects at a convenient height for work using horizontal surfaces above the ground, or to store things...
, other decorative arts, and the visual arts
Visual arts
The visual arts are art forms that create works which are primarily visual in nature, such as ceramics, drawing, painting, sculpture, printmaking, design, crafts, and often modern visual arts and architecture...
followed in Europe and America until around 1830, although in the U. S. it continued in popularity in conservative regions outside the major metropolitan centers well past the mid-19th century. The style originated in and takes its name from the rule of Napoleon I
Napoleon I
Napoleon Bonaparte was a French military and political leader during the latter stages of the French Revolution.As Napoleon I, he was Emperor of the French from 1804 to 1815...
, known as the First French Empire
First French Empire
The First French Empire , also known as the Greater French Empire or Napoleonic Empire, was the empire of Napoleon I of France...
, where it was intended to idealize Napoleon's leadership and the French state. The style corresponds to the Biedermeier
Biedermeier
In Central Europe, the Biedermeier era refers to the middle-class sensibilities of the historical period between 1815, the year of the Congress of Vienna at the end of the Napoleonic Wars, and 1848, the year of the European revolutions...
style in the German-speaking lands, Federal style in the United States and to the Regency style in Britain. An earlier phase of the style was called the Adam style
Adam style
The Adam style is an 18th century neoclassical style of interior design and architecture, as practiced by the three Adam brothers from Scotland; of whom Robert Adam and James Adam were the most widely known.The Adam brothers were the first to advocate an integrated style for architecture and...
in Great Britain and "Louis Seize" or Louis XVI
Louis XVI of France
Louis XVI was a Bourbon monarch who ruled as King of France and Navarre until 1791, and then as King of the French from 1791 to 1792, before being executed in 1793....
, in France.

Two French architects, Charles Percier
Charles Percier
Charles Percier was a neoclassical French architect, interior decorator and designer, who worked in a close partnership with Pierre François Léonard Fontaine, originally his friend from student days...
and Pierre Fontaine
Pierre Fontaine
Pierre Fontaine may refer to:* Pierre Fontaine , French composer of the Burgundian school* Pierre François Léonard Fontaine , neoclassical French architectSee also...
, were together the creators of the French Empire style. The two had studied in Rome
Rome
Rome is the capital of Italy and the country's largest and most populated city and comune, with over 2.7 million residents in . The city is located in the central-western portion of the Italian Peninsula, on the Tiber River within the Lazio region of Italy.Rome's history spans two and a half...
and in the 1790s became leading furniture designers in Paris
Paris
Paris is the capital and largest city in France, situated on the river Seine, in northern France, at the heart of the Île-de-France region...
, where they received many commissions from Napoleon and other statesmen.

The Empire style was based on aspects of the Roman Empire
Roman Empire
The Roman Empire was the post-Republican period of the ancient Roman civilization, characterised by an autocratic form of government and large territorial holdings in Europe and around the Mediterranean....
and its many archaeological treasures which had been rediscovered starting in the 18th century. The preceding Louis XVI and Directoire styles employed straighter, simpler designs in comparison with the Rococo
Rococo
Rococo , also referred to as "Late Baroque", is an 18th-century style which developed as Baroque artists gave up their symmetry and became increasingly ornate, florid, and playful...
style of the 18th century. Empire designs heavily influenced the American Federal style (such as the United States Capitol
United States Capitol
The United States Capitol is the meeting place of the United States Congress, the legislature of the federal government of the United States. Located in Washington, D.C., it sits atop Capitol Hill at the eastern end of the National Mall...
building), and both were forms of propaganda
Propaganda
Propaganda is a form of communication that is aimed at influencing the attitude of a community toward some cause or position so as to benefit oneself or one's group....
through architecture. It was a style of the people, not ostentatious but sober and evenly balanced. The style was considered to have "liberated" and "enlightened" architecture just as Napoleon "liberated" the peoples of Europe with his Napoleonic Code
Napoleonic code
The Napoleonic Code — or Code Napoléon — is the French civil code, established under Napoléon I in 1804. The code forbade privileges based on birth, allowed freedom of religion, and specified that government jobs go to the most qualified...
.

The Empire period was popularized by the inventive designs of Percier and Fontaine
Percier and Fontaine
Percier and Fontaine was a noted partnership between French architects Charles Percier and Pierre François Léonard Fontaine. Together, Percier and Fontaine were inventors and major proponents of the rich and grand, consciously archaeological versions of neoclassicism we recognize as Directoire...
, Napoleon's architects for Malmaison
Malmaison
Malmaison may be:* Château de Malmaison, Rueil-Malmaison, France* Greenwood LeFlore's home, Greenwood, Mississippi, USA* Malmaison, a UK hotel chain....
. The designs drew heavily for inspiration on symbols and ornaments borrowed from the glorious ancient Greek and Roman empires. Buildings typically had simple timber frames and box-like constructions, veneer
Wood veneer
In woodworking, veneer refers to thin slices of wood, usually thinner than 3 mm , that are typically glued onto core panels to produce flat panels such as doors, tops and panels for cabinets, parquet floors and parts of furniture. They are also used in marquetry...
ed in expensive mahogany
Mahogany
The name mahogany is used when referring to numerous varieties of dark-colored hardwood. It is a native American word originally used for the wood of the species Swietenia mahagoni, known as West Indian or Cuban mahogany....
imported from the colonies. Biedermeier furniture also made use of ebony
Ebony
Ebony is a dense black wood, most commonly yielded by several species in the genus Diospyros, but ebony may also refer to other heavy, black woods from unrelated species. Ebony is dense enough to sink in water. Its fine texture, and very smooth finish when polished, make it valuable as an...
details, originally due to financial constraints. Ormolu
Ormolu
Ormolu is an 18th-century English term for applying finely ground, high-karat gold in a mercury amalgam to an object of bronze. The mercury is driven off in a kiln...
details (gilded bronze furniture mounts and embellishments) displayed a high level of craftsmanship. 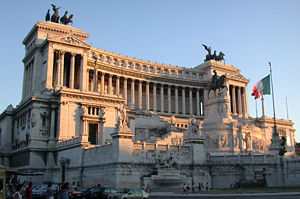 General Bernadotte, later to become King Karl Johan
Charles XIV John of Sweden
Charles XIV & III John, also Carl John, Swedish and Norwegian: Karl Johan was King of Sweden and King of Norway from 1818 until his death...
of Sweden and Norway, introduced the Napoleonic style to Sweden, where it became known under his own name. The Karl Johan style remained popular in Scandinavia even as the Empire style disappeared in other parts of Europe. France paid some of its debts to Sweden in ormolu bronzes instead of money, leading to a vogue for crystal chandeliers with bronze from France and crystal from Sweden.

After Napoleon lost power, the Empire style continued to be in favor for many decades, with minor adaptations. There was a revival of the style in the last half of the 19th century in France, again at the beginning of the 20th century, and again in the 1980s. 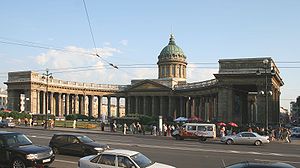 The most famous Empire-style structures in France are the grand neoclassical Arc de Triomphe du Carrousel, Vendôme column, and La Madeleine
Église de la Madeleine
L'église de la Madeleine is a Roman Catholic church occupying a commanding position in the 8th arrondissement of Paris. It was designed in its present form as a temple to the glory of Napoleon's army...
, which were built in Paris to emulate the edifices of the Roman Empire. The style took particular root in Imperial Russia, where it was used to celebrate the victory over Napoleon in such memorial structures as the General Staff Building
General Staff Building (Saint Petersburg)
The General Staff Building is an edifice with a 580 m long bow-shaped facade, situated on Palace Square in Saint Petersburg, Russia, in front of the Winter Palace.The building was designed by Carlo Rossi in the Empire style and built in 1819-1829...
, Kazan Cathedral, Alexander Column
Alexander Column
The Alexander Column also known as Alexandrian Column , is the focal point of Palace Square in Saint Petersburg, Russia. The monument was erected after the Russian victory in the war with Napoleon's France...
, and Narva Triumphal Gate
Narva Triumphal Gate
The Narva Triumphal Arch was erected in the vast Narva Square , Saint Petersburg, in 1814 to commemorate the Russian victory over Napoleon. The wooden structure was constructed on the Narva highway with the purpose of greeting the soldiers who were returning from abroad after their victory over...
. Stalinist architecture
Stalinist architecture
Stalinist architecture , also referred to as Stalinist Gothic, or Socialist Classicism, is a term given to architecture of the Soviet Union between 1933, when Boris Iofan's draft for Palace of the Soviets was officially approved, and 1955, when Nikita Khrushchev condemned "excesses" of the past...
is sometimes referred to as Stalin's Empire style.

The style survived in Italy longer than in most of Europe, partly because of its Imperial Roman associations, partly because it was revived as a national style of architecture following the unification of Italy in 1870. Mario Praz
Mario Praz
Mario Praz KBE was an Italian-born critic of art and literature, and a scholar of English literature. His best-known book, The Romantic Agony , was a comprehensive survey of the erotic and morbid themes that characterized European authors of the late 18th and 19th centuries...
wrote about this style as the Italian Empire. In the United Kingdom, Germany, and the United States, the Empire style was adapted to local conditions and gradually acquired further expression as the Egyptian Revival, Greek Revival, Biedermeier style
Biedermeier
In Central Europe, the Biedermeier era refers to the middle-class sensibilities of the historical period between 1815, the year of the Congress of Vienna at the end of the Napoleonic Wars, and 1848, the year of the European revolutions...
, Regency style, and late-Federal style.