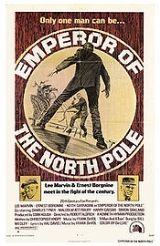 Encyclopedia
Emperor of the North Pole is a 1973 American film starring Lee Marvin
Lee Marvin
Lee Marvin was an American film actor. Known for his gravelly voice, white hair and 6' 2" stature, Marvin at first did supporting roles, mostly villains, soldiers and other hardboiled characters, but after winning an Academy Award for Best Actor for his dual roles in Cat Ballou , he landed more...
, Ernest Borgnine
Ernest Borgnine
Ernest Borgnine is an American actor of television and film. His career has spanned more than six decades. He was an unconventional lead in many films of the 1950s, including his Academy Award-winning turn in the 1955 film Marty...
, and Keith Carradine
Keith Carradine
Keith Ian Carradine is an American actor who has had success on stage, film and television. In addition, he is a Golden Globe and Oscar winning songwriter. As a member of the Carradine family, he is part of an acting "dynasty" that began with his father, John Carradine.-Early life:Keith...
. It was re-released under the shorter title Emperor of the North, and is better known under the latter name.

The film is about hobos during the 1930s and is set in the U.S. state
U.S. state
A U.S. state is any one of the 50 federated states of the United States of America that share sovereignty with the federal government. Because of this shared sovereignty, an American is a citizen both of the federal entity and of his or her state of domicile. Four states use the official title of...
of Oregon
Oregon
Oregon is a state in the Pacific Northwest region of the United States. It is located on the Pacific coast, with Washington to the north, California to the south, Nevada on the southeast and Idaho to the east. The Columbia and Snake rivers delineate much of Oregon's northern and eastern...
. It is based, in part, on the books The Road by Jack London
Jack London
John Griffith "Jack" London was an American author, journalist, and social activist. He was a pioneer in the then-burgeoning world of commercial magazine fiction and was one of the first fiction writers to obtain worldwide celebrity and a large fortune from his fiction alone...
and From Coast to Coast with Jack London by "A-No.-1" (the pen-name of Leon Ray Livingston
Leon Ray Livingston
Leon Ray Livingston was a famous hobo, travelling under the name "A No.1". He perfected the hobo symbols system, which lets other homeless people know where there are more or less generous people, free food, vicious dogs, etc. He was not a poor man; he simply preferred a life of travelling the...
), although both of those books predate the 1930s by a few decades. Carradine's character, Cigaret, uses the same moniker that Jack London used on the road, and like London, is portrayed as a young traveling companion to the older A-No.-1 (played by Marvin), but that is otherwise where the similarity between Carradine's character and Jack London ends, as Cigaret is portrayed in the film as immature, loud-mouthed, and none too bright. The title is a reference to a joke among hobos during the Great Depression
Great Depression
The Great Depression was a severe worldwide economic depression in the decade preceding World War II. The timing of the Great Depression varied across nations, but in most countries it started in about 1929 and lasted until the late 1930s or early 1940s...
that the world's best hobo was "Emperor of the North Pole", a way of poking fun at their own desperate situation since somebody ruling over the North Pole
North Pole
The North Pole, also known as the Geographic North Pole or Terrestrial North Pole, is, subject to the caveats explained below, defined as the point in the northern hemisphere where the Earth's axis of rotation meets its surface...
would reign over a wasteland.

Shack is a sadistic bully of a railroad conductor who takes it upon himself to forcibly remove any hobo who tries to ride on his train. Shack has an assortment of makeshift weapons: a hammer, a steel rod, and a chain.

A hobo who is a hero to his peers, A-No.1, manages to hop
Freighthopping
Freighthopping or train hopping is the act of surreptitiously hitching a ride on a railroad freight car. In the United States, this became a common means of transportation following the American Civil War as the railroads began pushing westward, especially among migrant workers who became known as...
the train with the younger, less-experienced Cigaret not far behind. At the next stop, A-No.1 evades Shack and escapes into the hobo jungle, but Cigaret is caught. Shack threatens to kill Cigaret, who is bragging that he and he alone got a free ride.

Shack is distracted when he gets the message that A-No.1 (whom he knows by reputation) has announced that he will become the first hobo to ride Shack's train all the way to Portland
Portland, Oregon
Portland is a city located in the Pacific Northwest, near the confluence of the Willamette and Columbia rivers in the U.S. state of Oregon. As of the 2010 Census, it had a population of 583,776, making it the 29th most populous city in the United States...
.

The other hobos agree that the first who can successfully ride Shack's train will have earned the title "Emperor of the North Pole." Railroad workers place bets whether A-No.-1 can do it, spreading the news far and wide over the telegraph, Shack being widely known and disliked.

A-No.1 hops the train and does everything he can to steer clear of Shack, pulling a series of pranks with the help of other hobos, such as running Shack's train into a siding. He tries to rid himself of the company of Cigaret, who tags along and makes a general pest of himself. Shack succeeds in ejecting the two, but they board a fast passenger train which overtakes Shack's train and ride it to Salem, Oregon
Salem, Oregon
Salem is the capital of the U.S. state of Oregon, and the county seat of Marion County. It is located in the center of the Willamette Valley alongside the Willamette River, which runs north through the city. The river forms the boundary between Marion and Polk counties, and the city neighborhood...
.

There they have several farcical encounters, including one with a policeman who chases the two into the Salem hobo jungle, accusing them of stealing a turkey. They also encounter a Holiness
Holiness movement
The holiness movement refers to a set of beliefs and practices emerging from the Methodist Christian church in the mid 19th century. The movement is distinguished by its emphasis on John Wesley's doctrine of "Christian perfection" - the belief that it is possible to live free of voluntary sin - and...
minister holding an outdoor baptism
Baptism
In Christianity, baptism is for the majority the rite of admission , almost invariably with the use of water, into the Christian Church generally and also membership of a particular church tradition...
service.

The two hobos reboard Shack's train after it arrives in Salem. The story ends with a climactic fight, involving heavy chains, planks of wood and an ax. A-No.1 ultimately has the bloodied Shack at his mercy, but instead of killing him, he just throws him off the train. He then tosses Cigaret off for bragging about how "they" defeated Shack, telling the kid he could have become a good bum but he's got no class.

The film was shot in and around the city of Cottage Grove, Oregon
Cottage Grove, Oregon
Cottage Grove is a city in Lane County, Oregon, United States. It received its name from its first postmaster, G. C. Pierce, in September 1861. Pierce's home at the time was in an oak grove. The population was 9,686 at the 2010 census.-History:...
along the right-of-way of the Oregon, Pacific and Eastern Railway
Oregon, Pacific and Eastern Railway
The Oregon, Pacific and Eastern Railway is a short line railroad that began in 1904 as the Oregon and Southeastern Railroad . The line ran between the towns of Cottage Grove and Wildwood. The Oregon, Pacific & Eastern Railway Company incorporated in 1912, and purchased the physical assets of the...
(OP&E). Willis Kyle, President of the OP&E in 1972, allowed the film company unlimited access to make the film. Oregon, Pacific and Eastern's rolling stock
Rolling stock
Rolling stock comprises all the vehicles that move on a railway. It usually includes both powered and unpowered vehicles, for example locomotives, railroad cars, coaches and wagons...
, including two steam locomotives (one of these being #19, a type 2-8-2
2-8-2
Under the Whyte notation for the classification of steam locomotives, 2-8-2 represents the wheel arrangement of two leading wheels on one axle , eight powered and coupled driving wheels on four axles, and two trailing wheels on one axle...
Mikado), appear in the film. This was the same location used by Buster Keaton
Buster Keaton
Joseph Frank "Buster" Keaton was an American comic actor, filmmaker, producer and writer. He was best known for his silent films, in which his trademark was physical comedy with a consistently stoic, deadpan expression, earning him the nickname "The Great Stone Face".Keaton was recognized as the...
for his 1927 railroad feature The General. Also featured in the film is the Dorena Reservoir
Dorena Reservoir
Dorena Reservoir is a reservoir on the Row River in Lane County, Oregon, United States. It is located east of Cottage Grove. Dorena Dam was completed in 1949....
, located about 10 miles east of Cottage Grove,
and OP&E's railyard in downtown Cottage Grove.

The theme ballad, "A Man and a Train", written by Frank De Vol
Frank De Vol
Frank Denny De Vol, also known simply as De Vol was an American arranger, composer and actor.-Early life and career:...
with lyrics by Hal David
Hal David
Harold Lane "Hal" David is an American lyricist. He grew up in Brooklyn, New York. David is best known for his collaborations with composer Burt Bacharach.-Career:...
and sung by Marty Robbins, appears on his album All-Time Greatest Hits (Catalog# 77425), and the CD The Best of Marty Robbins released by Curb Records in January 2006, both featuring a second verse not used in the film.