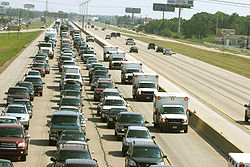 Evacuations may be carried out before, during or after natural disasters such as:
Other reasons include:

Emergency evacuation plans are developed to ensure the safest and most efficient evacuation time of all expected residents of a structure, city, or region. A benchmark "evacuation time" for different hazards and conditions is established. These benchmarks can be established through using best practices, regulations, or using simulations
Evacuation process simulation
Evacuation simulation is a method to determine evacuation times for areas, buildings, or vessels. It is based on the simulation of crowd dynamics and pedestrian motion....
, such as modeling the flow of people in a building, to determine the benchmark. Proper planning will use multiple exits, contra-flow lanes, and special technologies to ensure full, fast and complete evacuation. Consideration for personal situations which may affect an individual's ability to evacuate. These may include alarm signals that use both aural and visual alerts. Regulations such as building codes can be used to reduce the possibility of panic
Panic
Panic is a sudden sensation of fear which is so strong as to dominate or prevent reason and logical thinking, replacing it with overwhelming feelings of anxiety and frantic agitation consistent with an animalistic fight-or-flight reaction...
by allowing individuals to process the need to self-evacuate without causing alarm. Proper planning will implement an all-hazards approach so that plans can be reused for multiple hazards that could exist.

The particular phases are different for different objects, e.g., for ships a distinction between assembly and embarkation (to boats or rafts) is made. These are separate from each other. The decision whether to enter the boats or rafts is thus usually made after assembly is completed.

The strategy of individuals in evacuating buildings was investigated by John Abrahams in 1994. The independent variables were the complexity of the building and the movement ability of the individuals. With increasing complexity and decreasing motion ability, the strategy changes from "fast egress", through "slow egress" and "move to safe place inside building" (such as a staircase), to "stay in place and wait for help". The last strategy that is the notion of using a designated Safe Haven on the floor. This is a section of the building that is reinforced to protect against specific hazards, such as fire, smoke or structural collapse. Some hazards may have Safe Havens on each floor, while a hazard such as a tornado, may have a single Safe Haven or safe room. Typically persons with limited mobility are requested to report to a Safe Haven for rescue by first responders. In most buildings, the Safe Haven will be in the stairwell.

The most common equipment in buildings to facilitate emergency evacuations are fire alarms, exit sign
Exit sign
An exit sign is a device in a public facility denoting the location of the emergency exit , guiding people to the closest exit in case of fire or other emergency. Most relevant codes require exit signs to be permanently lit...
s, and emergency light
Emergency light
An emergency light is a battery-backed lighting device that comes on automatically when a building experiences a power outage. Emergency lights are standard in new commercial and high occupancy residential buildings, such as college dormitories...
s. Some structures need special emergency exit
Emergency exit
An emergency exit in a structure is a special exit for emergencies such as a fire: the combined use of regular and special exits allows for faster evacuation, while it also provides an alternative if the route to the regular exit is blocked by fire, etc....
or fire escape
Fire escape
A fire escape is a special kind of emergency exit, usually mounted to the outside of a building or occasionally inside but separate from the main areas of the building. It provides a method of escape in the event of a fire or other emergency that makes the stairwells inside a building inaccessible...
s to ensure the availability of alternative escape paths. Commercial passenger vehicles such as buses, boats, and aircraft also often have evacuation lighting and signage, and in some cases window
Window
A window is a transparent or translucent opening in a wall or door that allows the passage of light and, if not closed or sealed, air and sound. Windows are usually glazed or covered in some other transparent or translucent material like float glass. Windows are held in place by frames, which...
s or extra doors that function as emergency exits. Commercial emergency aircraft evacuation
Emergency aircraft evacuation
Emergency aircraft evacuation refers to emergency evacuation from an aircraft which may take place on the ground, in water, or mid-flight. There are standard evacuation procedures and special evacuation equipment.-Commercial airplanes:...
is also facilitated by evacuation slide
Evacuation slide
An evacuation slide is an inflatable slide used to evacuate an aircraft quickly. An escape slide is required on all commercial aircraft where the door sill height is such that, in the event of an evacuation, passengers would be unable to "step down" from the door uninjured An evacuation slide is...
s and pre-flight safety briefings. Military aircraft are often equipped with ejection seats or parachutes
Parachutes
Parachutes is the debut album by English alternative rock band Coldplay, released by the record label Parlophone on 10 July 2000 in the United Kingdom. The album was produced by the band and British record producer Ken Nelson, excluding one track which was produced by Chris Allison...
. Water vessels and commercial aircraft that fly over water are often equipped with personal flotation device
Personal flotation device
A personal flotation device is a device designed to assist a wearer, either conscious or unconscious, to keep afloat.Devices designed and approved by authorities for use by...
s and possibly life raft
Lifeboat (shipboard)
A lifeboat is a small, rigid or inflatable watercraft carried for emergency evacuation in the event of a disaster aboard ship. In the military, a lifeboat may be referred to as a whaleboat, dinghy, or gig. The ship's tenders of cruise ships often double as lifeboats. Recreational sailors sometimes...
s.

The evacuation of districts is part of disaster management. Many of the largest evacuations
Historical examples of large/mass evacuations of areas
The list of mass evacuations includes emergency evacuations of a large number of people in a short period of time. An emergency evacuation is the movement of persons from a dangerous place due to the threat or occurrence of a disastrous event whether from natural or man made causes or as the result...
have been in the face of war-time military attacks. Modern large scale evacuations are usually the result of natural disasters. The largest peace-time evacuations in the United States to date occurred during Hurricane Gustav
Hurricane Gustav
The name Gustav has been used for five tropical cyclones in the Atlantic Ocean:* 1984's Tropical Storm Gustav - Spent most of its existence as a tropical depression hovering over Bermuda, no major damage was reported....
and the category-5
Tropical cyclone scales
Tropical systems are officially ranked on one of several tropical cyclone scales according to their maximum sustained winds and in what oceanic basin they are located...
Hurricane Rita
Hurricane Rita
Hurricane Rita was the fourth-most intense Atlantic hurricane ever recorded and the most intense tropical cyclone ever observed in the Gulf of Mexico. Rita caused $11.3 billion in damage on the U.S. Gulf Coast in September 2005...
(2005) in a scare one month after the flood-deaths of Hurricane Katrina
Hurricane Katrina
Hurricane Katrina of the 2005 Atlantic hurricane season was a powerful Atlantic hurricane. It is the costliest natural disaster, as well as one of the five deadliest hurricanes, in the history of the United States. Among recorded Atlantic hurricanes, it was the sixth strongest overall...
.

The longer a person has lived in a coastal area, the less likely they are to evacuate. A hurricane's path is difficult to predict. Forecasters know about hurricanes days in advance, but their forecasts of where the storm will hit are only educated guesses. Hurricanes give a lot of warning time compared to most disasters humans experience. However, this allows forecasters and officials to "cry wolf," making people take evacuation orders less seriously. Hurricanes can be predicted to hit a coastal town many times without the town ever actually experiencing the brunt of a storm. If evacuation orders are given too early, the hurricane can change course and leave the evacuated area unscathed. People may think they have weathered hurricanes before, when in reality the hurricane didn't hit them directly, giving them false confidence. Those who have lived on the coast for ten or more years are the most resistant to evacuating. http://64.233.161.104/search?q=cache:dmakGqrXA9sJ:www.scseagrant.org/pdf_files/ch_summer_02.pdf+hurricane+evacuation+refuse+old-timers&hl=en&client=firefox-a

Since Hurricane Katrina, there has been an increase in evacuation planning. Current best practices include the need to use multi-modal transportation networks. Hurricane Gustav
Hurricane Gustav
The name Gustav has been used for five tropical cyclones in the Atlantic Ocean:* 1984's Tropical Storm Gustav - Spent most of its existence as a tropical depression hovering over Bermuda, no major damage was reported....
used military airlift resources to facilitate evacuating people out of the affected area. More complex evacuation planning is now being considered, such as using elementary schools as rally points for evacuation. In the United States, elementary schools are usually more numerous in a community than other public structures. Their locations and inherent design to accommodate bus transportation makes it an ideal evacuation point.

In the United States a person cannot be forced to evacuate under most conditions. To facilitate voluntary compliance with mandatory evacuation orders first responders and disaster management officials have used creative techniques such as asking people for the names and contact of their next of kin, writing their Social Security Numbers on their limbs and torso so that their remains can be identified, and refusing to provide government services in the affected area, including emergency services.