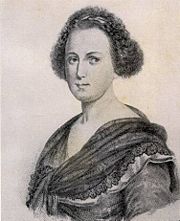 Eleonora Anna Naria Felice de Fonseca Pimentel (Leonor da Fonseca Pimentel Chaves; 13 January 1751 - , 20 August 1799) was an Italian
Italy
Italy , officially the Italian Republic languages]] under the European Charter for Regional or Minority Languages. In each of these, Italy's official name is as follows:;;;;;;;;), is a unitary parliamentary republic in South-Central Europe. To the north it borders France, Switzerland, Austria and...
poet
Poet
A poet is a person who writes poetry. A poet's work can be literal, meaning that his work is derived from a specific event, or metaphorical, meaning that his work can take on many meanings and forms. Poets have existed since antiquity, in nearly all languages, and have produced works that vary...
and revolutionary
Revolutionary
A revolutionary is a person who either actively participates in, or advocates revolution. Also, when used as an adjective, the term revolutionary refers to something that has a major, sudden impact on society or on some aspect of human endeavor.-Definition:...
connected with the Neapolitan revolution and subsequent short-lived Neapolitan Republic (alternately known as the Parthenopean Republic) of 1799, a sister republic of the French Republic and one of many set up in the 1790s in Europe
Europe
Europe is, by convention, one of the world's seven continents. Comprising the westernmost peninsula of Eurasia, Europe is generally 'divided' from Asia to its east by the watershed divides of the Ural and Caucasus Mountains, the Ural River, the Caspian and Black Seas, and the waterways connecting...
.

In the 1770s she became an important part of literary circles of the day in Naples
Naples
Naples is a city in Southern Italy, situated on the country's west coast by the Gulf of Naples. Lying between two notable volcanic regions, Mount Vesuvius and the Phlegraean Fields, it is the capital of the region of Campania and of the province of Naples...
. Much of her literary output was given over to voluminous exchanges of letters with other literati. Most prominent of these is a long correspondence in the 1770s with Metastasio
Metastasio
Pietro Antonio Domenico Trapassi, better known by his pseudonym of Metastasio, was an Italian poet and librettist, considered the most important writer of opera seria libretti.-Early life:...
, the Italian court poet in Vienna
Vienna
Vienna is the capital and largest city of the Republic of Austria and one of the nine states of Austria. Vienna is Austria's primary city, with a population of about 1.723 million , and is by far the largest city in Austria, as well as its cultural, economic, and political centre...
and greatest librettist of the 18th century.

In the 1790s she became involved in the Jacobin
Jacobin (politics)
A Jacobin , in the context of the French Revolution, was a member of the Jacobin Club, a revolutionary far-left political movement. The Jacobin Club was the most famous political club of the French Revolution. So called from the Dominican convent where they originally met, in the Rue St. Jacques ,...
movement in Naples
Naples
Naples is a city in Southern Italy, situated on the country's west coast by the Gulf of Naples. Lying between two notable volcanic regions, Mount Vesuvius and the Phlegraean Fields, it is the capital of the region of Campania and of the province of Naples...
that was working to overthrow the monarchy and establish a local version of the French Republic. She was one of the leaders of the revolution that overthrew the Bourbon
House of Bourbon
The House of Bourbon is a European royal house, a branch of the Capetian dynasty . Bourbon kings first ruled Navarre and France in the 16th century. By the 18th century, members of the Bourbon dynasty also held thrones in Spain, Naples, Sicily, and Parma...
monarchy and installed the republic in January 1799.

She tried to avert the death penalty by claiming to be pregnant. When she was discovered not to be, she asked at least to be beheaded, not hanged, but there was no mercy. The public hanging of a noblewoman was seen as something quite outrageous. Eleonora Pimentel had not committed any crimes during the revolution, only edited newspapers and worked as a journalist.

Reportedly, a main reason for the resorted monarchy insisting on her execution were pamphlets she wrote denouncing Queen Maria Carolina of lesbian
Lesbian
Lesbian is a term most widely used in the English language to describe sexual and romantic desire between females. The word may be used as a noun, to refer to women who identify themselves or who are characterized by others as having the primary attribute of female homosexuality, or as an...
ism.