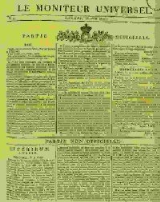 Encyclopedia
Le Moniteur Universel was a French
France
The French Republic , The French Republic , The French Republic , (commonly known as France , is a unitary semi-presidential republic in Western Europe with several overseas territories and islands located on other continents and in the Indian, Pacific, and Atlantic oceans. Metropolitan France...
newspaper founded in Paris
Paris
Paris is the capital and largest city in France, situated on the river Seine, in northern France, at the heart of the Île-de-France region...
on November 24, 1789 under the title Gazette Nationale ou Le Moniteur Universal by Charles-Joseph Panckoucke
Charles-Joseph Panckoucke
Charles-Joseph Panckoucke was a French writer and publisher. He was responsible for numerous influential publications of the era, including the literary journal Mercure de France and the Encyclopédie Méthodique, a successor to the Encyclopédie of Denis Diderot.Panckoucke was born in the city of...
, and which ceased publication on June 30, 1901. It was the main French newspaper during the French Revolution
French Revolution
The French Revolution , sometimes distinguished as the 'Great French Revolution' , was a period of radical social and political upheaval in France and Europe. The absolute monarchy that had ruled France for centuries collapsed in three years...
and was for a long time the official journal
Gazette
A gazette is a public journal, a newspaper of record, or simply a newspaper.In English- and French-speaking countries, newspaper publishers have applied the name Gazette since the 17th century; today, numerous weekly and daily newspapers bear the name The Gazette.Gazette is a loanword from the...
of the French government and at times a propaganda
Propaganda
Propaganda is a form of communication that is aimed at influencing the attitude of a community toward some cause or position so as to benefit oneself or one's group....
publication, especially under the Napoleonic regime. Le Moniteur had a large circulation in France and Europe, and also in America during the French Revolution.

The interest aroused by the debates of the first National Assembly
National Assembly
National Assembly is either a legislature, or the lower house of a bicameral legislature in some countries. The best known National Assembly, and the first legislature to be known by this title, was that established during the French Revolution in 1789, known as the Assemblée nationale...
suggested to Hugues-Bernard Maret
Hugues-Bernard Maret, duc de Bassano
Hugues-Bernard Maret, 1st Duc de Bassano was a French statesman and journalist.-Early career:Born at Dijon , he received a solid education, and then entered the legal profession – becoming a lawyer at the King's Council in Paris...
the idea of publishing them in the Bulletin de l'Assemblée. Charles-Joseph Panckoucke (1736-1798), owner of the Mercure de France
Mercure de France
The Mercure de France was originally a French gazette and literary magazine first published in the 17th century, but after several incarnations has evolved as a publisher, and is now part of the Éditions Gallimard publishing group....
and publisher of the famous Encyclopédie
Encyclopédie
Encyclopédie, ou dictionnaire raisonné des sciences, des arts et des métiers was a general encyclopedia published in France between 1751 and 1772, with later supplements, revised editions, and translations. It was edited by Denis Diderot and Jean le Rond d'Alembert...
of 1785, persuaded him to merge this into a larger paper, the Gazette Nationale ou Le Moniteur Universel.

On December 2, 1799 Le Moniteur was declared an official newspaper. Napoleon controlled it via Hugues-Bernard Maret
Hugues-Bernard Maret, duc de Bassano
Hugues-Bernard Maret, 1st Duc de Bassano was a French statesman and journalist.-Early career:Born at Dijon , he received a solid education, and then entered the legal profession – becoming a lawyer at the King's Council in Paris...
and Jean Jacques Régis de Cambacérès
Jean Jacques Régis de Cambacérès
Jean-Jacques-Régis de Cambacérès, 1st Duke of Parma was a French lawyer and statesman during the French Revolution and the First Empire, best remembered as the author of the Napoleonic code, which still forms the basis of French civil law.-Early career:Cambacérès was born in Montpellier, into a...
, who were responsible for its content. Due to Napoleon's strict controls of the press, the Moniteur's reports of legislative debates were replaced by bulletins of the Grand Army and polemical articles directed against England.

The words Gazette Nationale were dropped from the newspaper's name on January 1, 1811, when it became Le Moniteur Universel. The newspaper also became less exclusively political, articles on literature, science, and art occupying a considerable portion of its columns.

Napoleon's return from exile on Elba
Elba
Elba is a Mediterranean island in Tuscany, Italy, from the coastal town of Piombino. The largest island of the Tuscan Archipelago, Elba is also part of the National Park of the Tuscan Archipelago and the third largest island in Italy after Sicily and Sardinia...
on March 20, 1815 confirmed Le Moniteur in its position as official journal; Le Moniteur announced in the same edition both the departure of King Louis XVIII
Louis XVIII of France
Louis XVIII , known as "the Unavoidable", was King of France and of Navarre from 1814 to 1824, omitting the Hundred Days in 1815...
and the arrival of the Emperor in the Tuileries.

Immediately after the July Revolution
July Revolution
The French Revolution of 1830, also known as the July Revolution or in French, saw the overthrow of King Charles X of France, the French Bourbon monarch, and the ascent of his cousin Louis-Philippe, Duke of Orléans, who himself, after 18 precarious years on the throne, would in turn be overthrown...
of 1830, one of the first steps of the provisional government was to seize control of Le Moniteur and the government of Louis Philippe
Louis-Philippe of France
Louis Philippe I was King of the French from 1830 to 1848 in what was known as the July Monarchy. His father was a duke who supported the French Revolution but was nevertheless guillotined. Louis Philippe fled France as a young man and spent 21 years in exile, including considerable time in the...
put it under the control of the ministerial departments.